Maybe the St. Paul Chamber Orchestra will show up at your home someday, park the big SPCO truck and play a concert. Rarely has a major American orchestra been so determined to bring music to the people or made it so easy.

In addition to its home at the Ordway Concert Hall in downtown St. Paul, the SPCO performs in 15 locations in and around the Twin Cities. With a ridiculously inexpensive monthly membership of $5, you can attend as many concerts anywhere as you want. More than half of the regular-priced concert tickets go for $12 or less. Kids and students always get in free. Concerts at the Capri Theater are free to everyone.

Starting this week, you can watch full-length SPCO concert videos on any of your devices, on demand and free. On Saturday evening (June 10), you can view a live stream of the sold-out season finale concert, to be broadcast in HD.

Since 2011, the SPCO has had a free online Listening Library of concert recordings. That has now been folded into something called the Concert Library, which also includes videos. There are four videos so far, but the SPCO means to add seven to 10 new concert videos each year, as funding permits. An existing SPCO Listening Library app will be replaced this summer by a Concert Library app.

As far as the SPCO knows, this is the first time a professional orchestra in America has offered live and on-demand concert videos free of charge. In a statement, Managing Director and President Jon Limbacher called this “the next step in our efforts to make classical music available to everyone in our community. … [We] recognize that many people are unable to hear us in person: nursing home residents and homebound seniors, parents of young children at home, patrons who have moved away from the area.” And people who aren’t comfortable going to concerts in concert halls.

These are not concerts recorded or streamed by someone with a cellphone. Over the past year, six broadcast-quality cameras were installed in the Concert Hall, each remotely operated with a robotic control system. The audio mix is provided by Classical MPR, the SPCO’s longtime broadcast partner. “The concert videos in the Concert Library come as close as possible to replicating the experience of seeing and hearing the SPCO live in concert,” said Artistic Director and principal violin Kyu-Young Kim. Close-up shots show the interaction between the musicians, who most often play without a conductor, so they’re watching each other.

If you tune in Saturday night, what will you see and hear? The concert begins with Mendelssohn’s “Fair Melusina” Overture, based on a fairy tale about a water sprite who is cursed to become a snake from the waist down every Saturday. (Complications ensue.) It ends with Beethoven’s 7th Symphony, with its famously somber and achingly gorgeous second movement (heard in movies including “The King’s Speech” and “Mr. Holland’s Opus”).

In between, something else the SPCO is known for: the world premiere of a newly commissioned work. Houston-based composer Pierre Jalbert’s Violin Concerto was co-commissioned by the SPCO, the Los Angeles Chamber Orchestra and the Milwaukee Symphony to showcase their concertmasters – in our case, Steven Copes. It will be performed here first.

The season finale concerts will also be the last ones led by conductor and violinist Thomas Zehetmair in his role as one of the SPCO’s artistic partners. Don’t worry, he’ll be back, just not as artistic partner.

We asked Kim to give us some background on the commission. What did the SPCO see in Jalbert and his music that seemed like a good fit for the orchestra?

“One is his sense of color and orchestration,” Kim said. “He has really beautiful textures and colors, and he’s really accomplished in terms of his writing. Especially when we’re closing the season, it’s nice to have complete confidence that we’re going to get something sparkly and great. He also writes beautifully for strings. It will be a nice contrast to the rest of the program and a great way to end our season.”

Then we spoke with Jalbert about his new work. A prolific composer who studied under George Crumb and has won several prestigious awards, including the Rome Prize and the BBC Masterprize, Jalbert is a professor of composition and theory at Rice University. His works have been performed by orchestras including the London Symphony Orchestra, the Budapest Symphony, the Boston Symphony and many others.

MinnPost: Tell us about your first violin concerto.

Pierre Jalbert: It’s not the traditional three movements. It’s two movements, but the first is two movements in one. It begins with a sort of ethereal music in the strings and percussion that the violinist [Copes] floats above. That brings out the lyrical qualities of the violin. Then it builds to a much faster, almost scherzo-like section, which brings out the more playful, skittering characteristics of the violin. Then the ethereal music comes back at the end of the first movement.

The second movement is more free. Again, two musics play off each another. A pulse-oriented music returns again and again and eventually takes over the piece. In between are short bursts of free, still, slow-moving music. The two musics go back and forth fairly rapidly, like a kaleidoscopic form, or a mosaic form. The pulse-oriented music leads to a virtuosic, fiery cadenza toward the end of the piece.

MP: How would you describe the emotional content? What do you want us to feel? 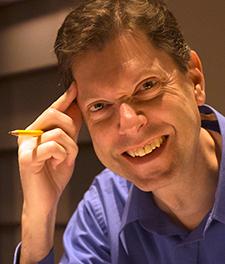 PJ: For me, the opening movement has a spiritual mysteriousness. In some of my other works, I’ve used Gregorian chant. There are no quotes from chant in this piece, but I think it’s the same kind of spiritual longing. The more pulse-oriented music is just meant to be exciting and challenging for the orchestra and soloist. I wanted the orchestra not just to be the accompanist, but an integral part. So there are certain sections where the orchestra takes over as the main protagonist.

MP: When you spoke with the SPCO about this commission, you specifically requested a piano part, along with their usual instrumentation of strings and double winds. Why?

PJ: There are certain things I like to do with the piano as part of the orchestra. I really love combining it with percussion. I use it a lot with mallet percussion, like the vibraphone. When the piano and vibraphone play together, it almost creates a new instrument – kind of a super-instrument. I also combine piano with pizzicato strings.

MP: You were writing this piece last year, in November and December. Were you responding at all to the political moment or the times we’re in?

PJ: I think our music always reflects our times. I’ve been writing several pieces while all of this has been going on. I had a new string quartet played a few weeks ago, and I was saying to the audience that the piece is lyrical but sometimes very gritty, and perhaps it’s a reflection of the times we’re living in. I would say the same about this piece.

Performances of the SPCO’s Season Finale: Beethoven’s Seventh Symphony take place Friday, June 9, at 11 a.m. and 8 p.m., Saturday at 8 p.m. and Sunday at 2 p.m., all in the Ordway Concert Hall. All performances are sold out, but you can add your name to a wait list online or by phone. 651-291-1144. Watch Saturday’s performance live at 8 p.m. on any internet-connected device. There’s an open rehearsal Thursday morning at the Concert Hall; tickets are $10. FMI.

The interview with Pierre Jalbert has been edited and condensed.