For five years, the Saint Paul Chamber Orchestra’s Liquid Music series has cultivated and rewarded audiences who are willing to take a chance. Curated by Kate Nordstrum, who seems to know interesting artists everywhere, the series’ only certainty is its unpredictability.

For instance, who else would put Bon Iver’s Justin Vernon on the same stage as St. Paul’s TU Dance at the Palace Theater? That’s the big surprise of Liquid Music’s 2017-18 season, announced today, but it’s not the only surprise.

How did it happen?

“I love TU Dance so much, and I’ve known them since I moved to town,” Nordstrum said in conversation last week. “They light up rooms. I’ve been feeling the need to get back to my own artistic roots and reach out to dance more. Uri [Sands] and I started meeting to talk about doing a project. I’ve always loved the music choices TU Dance has made. We ended up hoping the work would be a collaboration with Justin.

“I really respect him as a musician, and there are parts of his latest album [‘22, a Million’] that would be great to move to and great for dance. Justin is very familiar with the work Liquid Music has been doing, especially with Stargaze and Poliça. So there was a lot of mutual respect, but we hadn’t actually met each other. Finally, we met. Then Uri and Justin met and got along, which is completely critical. There has to be a spark between them. Justin was able to go to TU Dance’s recent performance at the Ordway this spring and was very inspired. Everyone’s psyched. Everyone’s excited. It’s a good place for us all to be.”

Vernon has never written for dance; TU has always chosen its own music. And Liquid Music has never presented at the Palace. Where, btw, the main lower level will be seated, not its usual standing. Chairs will be brought in so everyone can see. This will be, in Nordstrum’s words, “a totally integrated live performance of new music and dance.” The downside: You’ll have to wait until April 2018. 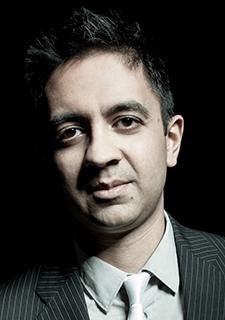 A few more of the surprises in store for 2017-18: An evening at the Walker with Vijay Iyer, one of today’s most important and influential composers, musicians and educators, to include a collaboration with photographer, novelist and spoken word artist Teju Cole and a performance by SPCO musicians of an Iyer piano quintet (May 31). Two free “On Being” conversations between Krista Tippett and Liquid Music artists (Jan. 15, May 30). A free performance by fiery SPCO artistic partner Patricia Kopatchinskaja in the Walker galleries (Oct. 26). The Twin Cities debut of maximalist British composer Anna Meredith and her band (Feb. 7). New York’s Grand Band – six pianists at six grand pianos on the Ordway Concert Hall stage – playing a world premiere that includes new work by Missy Mazzoli (May 16). Meanwhile, Ashwini Ramaswamy of Ragamala Dance and New York’s Jace Clayton, aka DJ/Rupture, will be in virtual residency, putting something together for 2018-19.

(A cool coincidence: Iyer was the music director of the most recent Ojai Music Festival in Ojai, California, a famously adventurous and eclectic event that took place last weekend. Next year’s music director is Patricia Kopatchinskaja.)

Here’s what we can predict: that almost any Liquid Music event will be fresh, unexpected, and probably sold out. View the full sixth season online. Subscriptions ($162) and individual tickets ($20-45, depending on the show) are on sale now.

In May, I spoke with Dominique Serrand, co-founder of the Moving Company, about “Refugia,”  a new play that was about to open at the Guthrie. Inspired in part by the Syrian refugee crisis, “Refugia” is about people crossing all kinds of borders, including the one between life and death. After its opening on May 19 (its run ended Sunday), the play was praised by those, including this writer, who loved its stories, scope and poetry. And it was criticized by others, including Twin Cities theater blogger Laura vanZandt and theater artist Kory LaQuess Pullam, who were part of a one-hour community conversation about “Refugia” last week at the Guthrie.

One specific objection of both vanZandt and Pullam was based on their reading of the MinnPost interview with Serrand. On her blog, One Girl Two Cities, vanZandt wrote: “According to statements in this MinnPost interview, director and co-writer Dominique Serrand talked to people who know refugees, as well as read articles and books, but from the sound of it they didn’t speak one-on-one with refugees themselves.” In an article published at Minnesota Playlist, Pullam wrote: “In the previously noted MinnPost article, Serrand is quoted saying that he spoke to people who knew refugees. However, he did not actually ever speak to any refugees personally.”

This is the part of the interview they are referring to:

MinnPost: What kinds of research did you do for “Refugia”?

Dominique Serrand: All kinds. Books, press from everywhere. We were very attentive to very different accounts coming from all sides. So international press, obviously. And a couple of my family members work for Reporters Without Borders and the Human Rights Commission. So we got real facts, accounts of events that happened and personal stories. It’s fascinating to hear those people talk because they’re on the front lines.

My sister teaches out in the streets in Paris. She teaches refugees who have just arrived the basics of French so they can get by. She brings a blackboard and writes words and tries to help them understand what they mean, so they can ask for bread and buy bread. If you speak even a few words of someone else’s language, you’re better received.

Serrand is not quoted here saying that he spoke with refugees. In fact, he did. He told me so at the Guthrie after the community conversation. When I went back and listened again to the recording of our conversation, I found this:

… It’s fascinating to hear those people talk because they’re on the front lines. I talked to refugees personally, but not refugees who were refugees in the last two years. People in the last 20 years. …

The omission of those two sentences led to an undeserved and inaccurate criticism of “Refugia.” I left that part out in condensing the interview, for which I apologize to Serrand; others made assumptions. Let’s all be more careful out there.

Tonight (Tuesday, June 13) at Grace-Trinity Community Church: Fredrik Backman in conversation with Julie Schumacher. Backman is the author of “A Man Called Ove,” the international best-selling novel that became a hit Swedish-Norwegian film (and two-time Oscar nominee) that opened last year’s MSPIFF. He’ll present his newest novel, “Beartown,” and talk with Thurber Prize-winning author and U of M professor Schumacher. 7 p.m. FMI and tickets ($26.99). The ticket price is the cost of the book; you’ll receive either a copy of “Beartown” or a Magers & Quinn gift card for that amount. 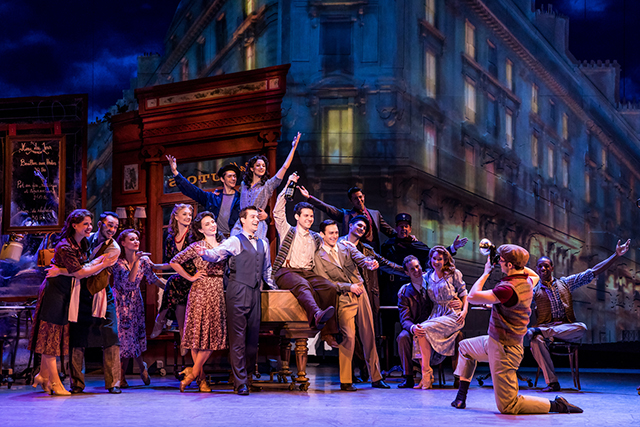 Photo by Matthew Murphy
The cast of “An American in Paris.”

Opens tonight at the Ordway: “An American in Paris.” The first national tour of the most-awarded musical of 2015. The four-time Tony winner was inspired by the romantic 1951 movie that won six Oscars. Set in the aftermath of World War II, it’s about an American soldier, a French girl and a great European city, with music and lyrics by George and Ira Gershwin. Directed and choreographed by Christopher Wheeldon, one of ballet’s most important living choreographers. 7:30 p.m. FMI and tickets ($42-119.50). Eight evening and matinee performances; ends Sunday, June 18. Tomorrow (Wednesday) includes a preshow extra and a postshow talkback.

Wednesday at Intermedia Arts: The Thread Live With Jacqueline Woodson. Woodson is the author of “Brown Girl Dreaming,” the New York Times best-selling memoir that won the National Book Award, the Coretta Scott King Award, a Newbery Honor Award and the NAACP Image Award. The Poetry Foundation recently named her the Young People’s Poet Laureate. She’ll talk with MPR’s Kerry Miller about her latest novel, “Another Brooklyn,” her first for adults. Doors at 6:30 p.m., event at 7. Free, but fully booked; you can sign up for an email alert in case tickets become available.

Thursday morning at the Hill Center: Cabinet of Curiosity Tour. Travel back in time and upstairs into the nooks and crannies of the Beaux Arts-style reference library founded and funded in large part by James J. Hill. Opened to the public in 1921, entered on the National Register of Historic Places in 1975, it’s a beauty. We wish they would offer this tour on a Saturday or weekday evening. 10:30-11:30 a.m. FMI and registration ($6 adults, $4 children and seniors, free to members).