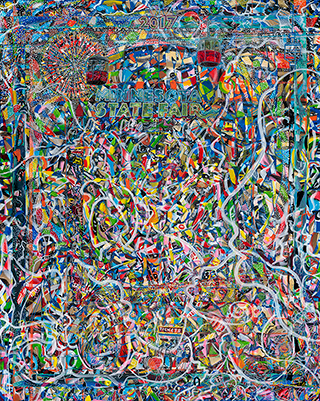 The State Fair’s annual commemorative art is supposed to make us happy. We’ve seen a lot of really good commemorative art over the years since this tradition began in 2004, but Ta-coumba Aiken’s vibrant, energetic painting seems like the first you could actually hear, if you put your ear near enough and knew how to listen.

Shapes and colors swirl. The Midway’s Ferris wheel sparkles. Lights flash. The Skyride’s gondolas pass overhead. People are everywhere. From a distance, Aiken’s work looks like a heap of confetti; up close, it’s thousands of moments at the Fair.

In a statement, Aiken described his process: “In preparation, I visited last year’s fair 12 times over nine days and found myself concentrating on the enormous amount of energy and positive spirit I felt all over the fairgrounds. I observed people of every race, culture, gender and they were all exploring.

Unveiled last week at the fairgrounds, the acrylic-on-canvas interpretation has so much to see you can’t take it all in. “Just like the fair,” Aiken said, “my piece has your eyes moving from one place to another until they settle in on something familiar.”

Aiken has participated in creating more than 600 murals and public art sculptures. (“Participated in creating” because he often makes them with other people, as community projects.) Starting this summer, he’ll be working on a new installation for Walker West Music Academy that will literally change its face, covering more than 2,000 square feet of the building’s facade.

The original commemorative art painting (4′ x 5′) will be on display in the Fine Arts Center during the Fair. Prints ($50) and posters ($10) are available here.

Opens Thursday at the Woman’s Club of Minneapolis: “Don Giovanni.” Skylark Opera returns with another site-specific staging of a classic opera. This time, they’re setting Mozart’s tale of the immoral, power-hungry seducer in the historic and elegant Woman’s Club, designed by the architect of the Foshay Tower. They’ve shortened it by at least an hour and moved the time forward to the Prohibition Era, circa 1932, where Donny G. runs a speakeasy. Period dress is welcome on opening night. We saw Skylark’s “Tragedy of Carmen” at the Midpointe Event Center in February 2017, and Angels & Demons’ “The Marriage of Figaro” at the James J. Hill House in July 2016, and both were tremendously enjoyable. Skylark and Angels & Demons are co-presenting the Don; their common thread is Bob Neu, who co-founded Angels & Demons and was named Skylark’s artistic director last year. You’ll get to nibble during the banquet scene and stay for dessert post-show. FMI and tickets ($75). General admission, limited seating. 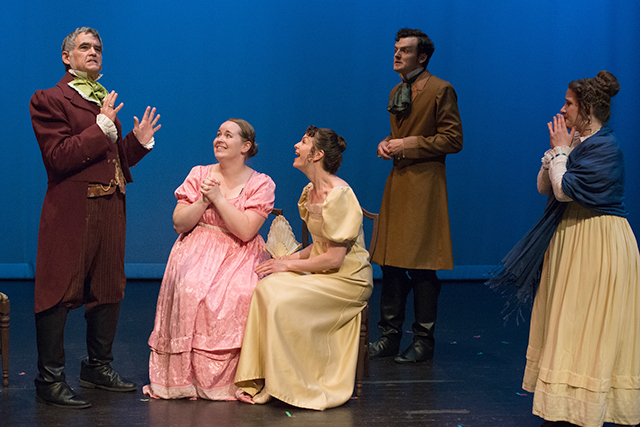 Thursday at the Wellstone Center: Aethem Theatre Company presents “Jane Austen’s Persuasion.” Anne Elliot had a fortune and naval officer Frederick Wentworth didn’t when they met, fell in love and were briefly engaged – until Anne was persuaded to break the engagement. Eight years later, they meet again, only now he’s the wealthy one and Anne’s family is struggling. Plus Anne is 27, a confirmed spinster in those days. We know what will happen – this is Jane Austen, after all – but it’s fun to watch it happen and hear the language. Much of the story takes place in Anne’s thoughts, which translates awkwardly to the stage; for her world premiere adaptation, Kayla Hambek has Anne write letters to her mother. Director Calli Kunz adds dynamic movement. 7 p.m. Thursday-Saturday, 2 p.m. Sunday. FMI and tickets ($18 advance, $20 door). Ends Sunday, June 18. 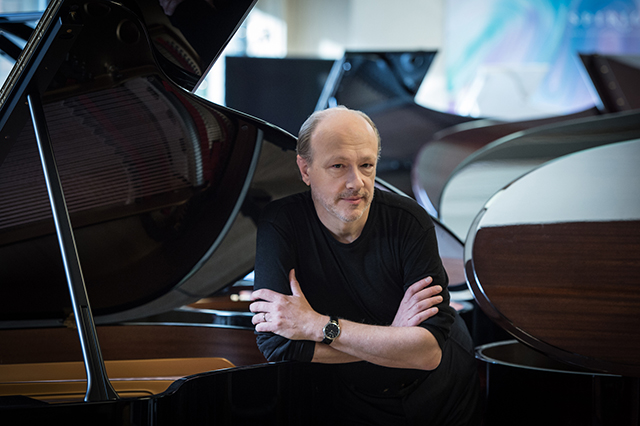 Friday and Saturday at Orchestra Hall: Season Finale: Vänskä Conducts Mahler’s Second. Massive, transformative, full of radiant hope, Mahler’s “Resurrection” is best experienced live and in a crowd. It begins with a funeral, looks around at the state of the world, then rises heavenward. The ultimate uplifting way to end a season. With the Minnesota Chorale, soprano Ruby Hughes and mezzo Sasha Cooke. The concert opens with a Haydn’s delightful Concerto in D major for Keyboard and Orchestra, with the Canadian virtuoso Marc-André Hamelin at the piano. 8 p.m. Friday and Saturday, 2 p.m. Sunday. FMI and tickets ($29-96). BIS Records and the Minnesota Orchestra just released the first disc in its Mahler project, a recording of Mahler’s Fifth. CDs will be available and you can have yours signed by Vänskä after the concert. Come early for a pre-concert preview with Phillip Gainsley and BIS producer Robert Suff to hear about the upcoming Mahler 2 recording, which will take place during the week following the finale concerts.

Sunday at Crooners: Nancy Harms. Formerly of Minneapolis and before then, Clara City, singer Nancy Harms lives in New York and jets off to club dates and festivals in Denmark and Paris. She’s here to visit her dad, work up some new material with her mentor, Arne Fogel, and sing a Father’s Day date in the Dunsmore listening room at Crooner’s. We asked what she’ll be singing, and she replied, “It will be the occasional nod to Dad and otherwise quite the smorgasbord. I’ll be doing tunes from all of my albums and also a couple tunes I haven’t sung in the U.S. including an original. I’m planning to make it quite a different lineup from my last few shows in Minnesota. There won’t be a lot of repeats for those who have been to recent shows.” Ah, but we like the repeats, too! With Tanner Taylor on piano, Graydon Peterson on bass and Pete Hennig on drums. 7 p.m. FMI and tickets ($20 show/$50 prix fixe dinner show).

On sale now: A staged reading of Chekhov’s “Uncle Vanya” at the Museum of Russian Art, with Terry Hempleman as Vanya and Tracey Maloney as Yelena. Presented by Theatre Novi Most, directed by Vladimir Rovinsky. Monday, June 26, 7 p.m. FMI and tickets ($18/15/10). The return of “Glensheen” to the History Theatre. Written by Jeffrey Hatcher and Chan Poling, this musical about a double murder in a Duluth mansion is back for the third time, and why not? It’s smart, hugely entertaining, and boasts a wonderful cast, with Jen Maren as Marjorie, Dane Stauffer as Roger and Wendy Lehr as several characters including “Beshmesher,” the lawyer. July 6-30. FMI and tickets ($25-56). Two new additions to the State Fair’s Grandstand slate: Stevie Nicks on Friday, Aug. 25 ($49-90) and The Minnesota Show with Garrison Keillor on Friday, Sept. 1 ($28/36). FMI and tickets.