From your first view of the stage (white surfaces, white frame, white curtain pooled on the floor) to your last (the cast in their jewel-toned costumes, taking their bows), the Guthrie’s production of “Sunday in the Park With George” is ravishing. Written with playwright James Lapine, Stephen Sondheim’s musical about artists, their art, and their process – and also, peripherally, their lives – should be lovely to look at. So kudos to scenic designer Jan Chambers, who created a world from horizontal and vertical lines. To costume designer Toni-Leslie James for spectacular work throughout, most notably Yvonne’s (Ann Michels’) pink skirt with its cascade of billows down the back. To lighting designer Jane Cox, who stippled the set with color and made everything glow. To projection designer Caite Hevner for gorgeous projections and playful animations.

Directed by Joseph Haj, “Sunday in the Park” ends the thrust stage part of the Guthrie’s 2016-17 mainstage season, the first shaped entirely by Haj in his role as artistic director. The summer musical is a fairly recent tradition for the Guthrie, and this is the theater’s first-ever Sondheim, unless you count “Sweeney Todd” and “Merrily We Roll Along” at the Guthrie Lab in 1999 and 2001.

It’s a musical in which nothing much happens. When people break up, they sing their frustration, then move on. When they die, they do it offstage. The main characters – French post-impressionist painter George Seurat and his modern but made-up great-grandson, a multimedia artist also named George – are all about their work and clumsy at relationships. Original George is a color theory nerd who invents a new way of painting, is rejected by his peers, completes just six major canvases in his lifetime and never sells one. Modern George seems most concerned with securing commissions and connecting with wealthy patrons. Both are terrible boyfriends.

The main and most memorable part of the musical is Act I, about original George and the making of his masterpiece “A Sunday Afternoon on the Island of La Grande Jatte” (which hangs in the Art Institute of Chicago, just down the road). Act II jumps forward a century to modern George and his latest work, “Chromalume #7,” a machine that blows a fuse during the opening. Act I is half again as long as Act II, clocking in at 1 hour 20 minutes against 54 minutes. The main point of Act II seems to be that modern George learns from the past.

Randy Harrison, probably best known as Justin Taylor in “Queer as Folk,” and Erin Mackey, who starred as Nellie in last summer’s musical “South Pacific,” lead a cast of 17, most actors playing two roles. Mackey is both original George’s lover and muse, the cutely named Dot, and modern George’s grandmother, Marie. The other characters are all people from the painting, given loosely sketched, invented identities and personalities: a pair of soldiers, two young women (both named Celeste) who flirt with the soldiers, an old lady (imagined as Seurat’s mother) and her nurse, a cranky boatman, a baker, a snarky successful painter and his wife, a young girl, a coachman. T. Mychael Rambo takes two memorable turns, first as a crass American and then as a wealthy arts patron. When the cast comes together in a tableau of the painting, it’s magical, a feat made more challenging by the thrust stage.

Fans of the original Broadway cast recording with Mandy Patinkin and Bernadette Peters won’t be disappointed with the singing at the Guthrie. Mackey is up to the demands of the tricky title song, and the shift to singing the elderly, frail Marie in Act II. Harrison nails the pointillistic “Color and Light” and the dramatic “Finishing the Hat.” The ensemble songs – “It’s Hot Up Here” and all three “Sundays” – are passionately sung. For part of the time, we glimpse the orchestra, led by Mark Hartman, behind a scrim at the back of the stage, a nice touch.

And whether you’ve seen the original Seurat painting in books or in person – it’s huge, over 10 feet wide and 6 feet high, made up of millions of dots that somehow coalesce into a shimmering, sunlit image – you’ll never see it the same way again.

“Sunday in the Park With George” continues through Aug. 20. FMI and tickets (start at $34).

Tonight (Thursday, June 29) and Friday at the White Page Gallery: BodyCartography Project Presents Olive Bieringa’s Felt Room. Part dance, part music, part installation – in the dark. Escape from a world of constant illumination in the “felt room,” where dancers move in and out. Leave screens behind, forget about time and let your imagination go. Bieringa is a dance maker, somatic movement therapist and cultural producer who grew up in New Zealand, studied in the Netherlands and Brooklyn, and teaches internationally. Thursday from 6-9 p.m., Friday from 7-10. Come for all or part of the time; arrive and depart when you like. Space is limited to 30. Reservations are essential. Email info@bodycartography.org to reserve. $10-20 suggested donation. 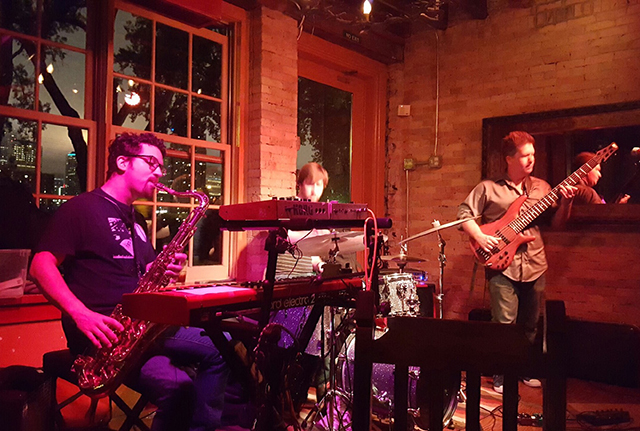 Tonight at the Bryant Lake Bowl Theater: Silverback Trio CD Release. David Hirsch (keyboards and saxophone), Brent Wallace (bass) and Byron Johnson-Blanchard (drums) have performed around town at places like the Aster, the Black Dog, Jazz Central and more. (You might have caught them at Golden’s Deli during Jazz Fest last weekend.) Their debut album is a high-energy fusion of jazz and rock, flavored with improvisation and occasionally slowing down for a thoughtful ballad. Doors at 7:30 p.m., show at 8. FMI and tickets ($8 advance, $10 door).

Tonight at the Heights: “Psycho.” On the big screen in a 35mm print courtesy of Universal. See it the way your parents or grandparents saw it. It is really, truly terrifying, and not because CGI. (Here’s something we learned from watching “Score: A Film Music Documentary”: When Bernard Herrmann added violins to the shower scene, he tricked us into thinking we were seeing more violence, and more skin, than we really were.) 7:30 p.m. FMI and tickets ($8).

Opens Friday at the Park Square: “Idiot’s Delight.” Girl Friday Productions, whose play this is, describes it as a “dramatic comedy about idealism, greed and the realities of war … set in a world on the brink.” Sounds contemporary, except Robert E. Sherwood’s play won the Pulitzer Prize … in 1936. Veteran director Craig Johnson leads a 17-member cast in what he calls one of the ‘big, sleek, well-constructed, entertaining yet thoughtful, limousine-like plays that Broadway produced in its heyday between the wars.” With John Middleton, Stacia Rice, Kory LaQuessa Pullam and Karen Wiese-Thompson. 7:30 p.m. FMI and tickets ($40/60). Ends July 23.