Start being sorry you gave away all your vinyl records (if you ever had any), or didn’t want your parents’ or grandparents’ collection, or don’t have a turntable. Vinyl is back. In fact, vinyl records are so popular that Sony, the biggest of the Big Three record labels, recently announced that it will start pressing them again, as soon as March 2018, in a new factory near Tokyo. The last time Sony made a vinyl record was 1989.

Bob Fuchs knows more about the music business locally than anyone. The general manager of the Electric Fetus, a longtime Minnesota mainstay, he has seen it all firsthand in his 30 years there (he started in the record department in December 1987). We spoke with him by phone last week.

MinnPost: Were you surprised by Sony’s announcement?

Bob Fuchs: I was. I didn’t think records were on their radar heavily enough, although I know they’ve been moving up. But with the streaming world we live in, I thought – vinyl’s not going to matter enough for Sony to press. It’s shocking, in a good way.

MP: What’s the story of vinyl at the Fetus?

The surprising thing to some people is we still sell CDs. They walk in and don’t even know that. They’re like, “I haven’t bought a CD in five or seven years!” We still sell twice as many CDs as LPs. Many people want physical media, whether it’s an LP or a CD. I play both every day.

MP: How has streaming affected your business?

BF: We’ve heard from many people who use streaming services so extensively that for them, that’s the radio. They pick a band they like on Spotify, hear other things like that, and use it for discovery purposes. Then they come in and buy the things they like best.

For many people, streaming is the be-all and end-all, and they won’t go any further. Maybe they bought some CDs or LPs 20 or 30 years ago, but no longer. We’ve lost about half the market. It’s just gone away. But of those who remain, many are coming back to LPs.

MP: Are you selling mostly new vinyl or used?

BF: Both. Probably about twice as many used as new. In dollar amounts, new vinyl is much more expensive than most used vinyl. Most new LPs are between $17 and $25.

MP: Why do you think people are buying vinyl? Is it just a fad or are they serious? 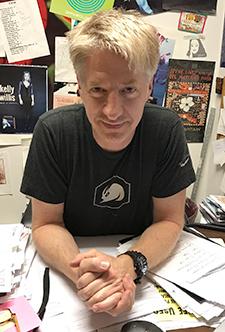 BF: I think many people want to write vinyl off as a fad that’s coming back. But it was a staple for 50 to 60 years, and then there was a period of about 10 years when it wasn’t in vogue, and now it’s coming back again because of the experience.

People say they like the sound, but regardless of the quality of your musical reproduction system at home, it’s the experience. You tend to be more engaged. You sit down. You stay close. Your experience is heightened by all your senses. You’re listening, you’re reading, you’re looking, you’re appreciating art. So it’s more encompassing than just streaming a song.

An LP is the ultimate cultural artifact for music. You’ve got liner notes. You’ve got lyrics. Oftentimes, you’ve got photography, artwork, information. It’s a stamp in time, and a physical presence. A gatefold LP is 2 feet by 1 foot. It’s like a book. Some people still prefer books.

MP: So the things we loved about the old LPs – the liner notes and art and illustrations – are coming back with the new LPs?

BF: When you compare most packaging now to 15 to 20 years ago, there were a lot of budget productions back then. Simple jackets, thin paper. They were minimalist and sometimes cheap. Today, people are thinking – this is the ultimate packaging. Let’s make it a gatefold. Let’s use heavier-weight cardboard or paper. Let’s press on heavier vinyl. Many people have commented at the counter that LPs are really heavy. They don’t remember them being so heavy.

MP: There’s a lot of bad news about streaming lately. SoundCloud cut staff, and Pandora’s CEO resigned, and the bigger Spotify gets, the more money it loses. Do you think Sony’s move is a response to that?

BF: It could be. It’s like the early days of Amazon. I don’t know if Amazon’s making money, but they’ve survived for years on taking territory and not making any margin. That’s kind of the game with a lot of the streaming services.

But streaming is here to stay. I know that. I don’t know who will perfect the business model, but Sony and some of the others have a long history of physical distribution, and they know they can keep at least a small core of the marketplace. Seven or eight years ago, just under a million records sold. Last year, 16 or 17 million records went through Soundscan [the sales tracking system]. Probably more than that sold, because many stores don’t report. And none of the used stuff gets reported. So LP sales were probably in the 30 to 70 million range last year, maybe over 100 million if you include all the used stuff that trades hands.

MP: From what I’ve read, Sony hasn’t yet decided what it’s going to issue on vinyl. If you were running Sony, what would you do?

BF: I would start to look at some of their major catalog players and if all those bases are covered. Your Michael Jacksons and your Springsteens, and are all the Clash records available? I would pick the obvious big sellers – the top 100 in rock, the top 40 or 50 in other genres – and then I would pay attention to the aftermarket. What rare records are selling for a bunch of money? I would pick and choose through some of those. Off the top of my head, I can’t tell you what those are for Sony, but we see things come through that are still going for $50 to $70. So I’d pick the rare collectible pieces and make sure they’re out.

MP: What has surprised you most about the vinyl revival?

BF: The single biggest thing I’ve noticed is the change in demographics. This whole revival has been pushed primarily, or at least initially and still very heavily, by people under 30. There’s a much higher percentage of women buying records than there were buying CDs or records previously. What stands out most for me is the number of young women who are buying records now. In my 30 years, I don’t ever remember that many young women in the store.

Because Thursday is the new Friday.

Tonight (Thursday, July 20) at Hamline Park: Spotlight on Peter Morales’ “Cajibracan” sculpture. Public Art Saint Paul is celebrating its 30th year with a series of birthday parties in every ward of the city. Tonight at Hamline Park on 1564 Lafond Ave., artist Peter Morales will talk about the creation of his mythological sculpture as part of the “Minnesota Rocks!” project, which began in 2006 and led to 12 artworks created from Minnesota stone, permanently installed in parks throughout the city. 6-7:30 p.m. Free.

Tonight at Orchestra Hall: Minnesota Orchestra 2017-18 Season Sampler. A Minnesota Orchestra season is always a lot to wrap your head around: nearly 100 performances and more than 50 different programs spanning 10 months from September through July. Where do you start deciding what to see and hear? The annual Season Sampler is a good place. Both Osmo Vänskä and Sarah Hicks will be there to lead the orchestra in excerpts from Beethoven’s Fifth and Mozart’s Symphony No. 31, an “All that Jazz” medley from the musical “Chicago,” and Berlioz’s “Roman Carnival” Overture featuring Minnesota Orchestra musicians playing side-by-side with their Fantasy Camp counterparts – talented musicians in the community. Plus surprises. 7:30 p.m. FMI and tickets ($25). Come at 5:30 for a $5 happy hour and music in the Atrium by the Jeremy Walker Trio. 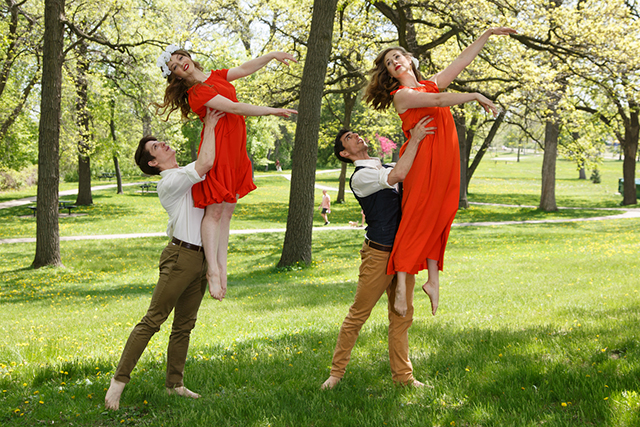 Tonight through Sunday at the Lab Theater: Eclectic Edge Ensemble Presents “Foot Flight by Night.” An evening-length adaptation of Shakespeare’s romantic “A Midsummer Night’s Dream,” told in dance and music. Working in the medium of jazz dance, which combines music and theater, artistic director and choreographer Karis Sloss has created dances that portray the longing for love, and has included comic relief in the form of a theatrical troupe lost in the enchanted forest. It’s all set to an original score and soundscape by four local composers, performed live. Sounds light, lively and fun. 7:30 p.m. Thursday-Saturday, 2 p.m. Sunday. FMI. Tickets here ($17 advance, $20 door, $15 students with ID). Friday’s performance will be followed by a reception.

Tonight through Saturday at the Southern Theater: Momentum: New Dance Works Week 2. The annual festival of what’s-new-and-now-in-dance began last week with two radically different and brilliant performances, one intense and hyperkinetic (Fire Drill and Tom Comitta’s “Bill: The Musikill”), one loving, welcoming, spiritual and magical (BLAQ’s “Taneber/BLAQ Wall Street”). Week 2 brings two more reasons to be amazed by the level of talent and creativity in our midst: “De’Light” by //CATHEDRAL\\ and STRONGmovement’s “6.” Watch what happens when dance artists are given time, financial support, expert feedback and opportunities to articulate and present their ideas. 8 p.m. FMI and tickets ($20). Here’s our preview of this year’s Momentum.

Starts tonight at Illusion Theater: Fresh Ink. The Illusion’s annual summer series of works-in-progress, with all tickets pay-what-you-want. Tonight through Saturday: “Strongman’s Ghost” by Jeffrey Hatcher, about a Great Leader who wants his story told the way he wants to be remembered, even if it diverges from the truth. Directed by Michael Robins, with Bill Corbett, Patrick Coyle, J.C. Cutler and Bob Davis. Next Thursday through Saturday (July 27-29): “The Pink Unicorn” by Elise Forier Edie, about a Christian widow in a conservative Texas town whose teenage daughter announces she is gender queer. Robins directs Kate Guentzel in the one-woman comedy. All performances are staged readings. 7:30 p.m. FMI and tickets ($1-30).