Standing a head above many people in the room, CRICE Kahlil, aka Connor Rice, surveyed the crowd at Public Functionary on Saturday. It was opening night for “The Shop,” a new exhibition he curated at the Northeast Minneapolis art space that prizes diversity, accessibility and community.

A conceptual show about the black barbershop, a microcosm of the African-American experience, it’s small but powerful, and smart. CRICE has gathered 15 works by eight black artists: well-established and emerging, men and women, across generations. The art – paintings, photographs, drawings, prints, a video and an animation – is approachable by anyone who comes in off the street.

If you go, read the labels, because things aren’t always what they seem. At first glance, Candice Davis’ video features a young black woman sitting patiently while white people do her hair. In fact, “Fix,” filmed at the Soap Factory, chronicles part of a 2016 performance in which Davis invited audience members to straighten her hair, a tale of violence perpetuated by white beauty standards, told in a privileged white space.

Now 24, just three years out of MCAD, CRICE had been thinking about “The Shop” for a big part of his young life. “I was a sophomore, going to shows, starting to be immersed in the art scene here, and I noticed there weren’t a lot of black people or people of color, and even less shows and work that dealt with issues we are experiencing and subject matter that relates to us,” he said in conversation at the opening. “I had a group of a few black friends at school and started talking about doing this show small-scale, just for us. I based my senior project on this theme. I always carried the torch for it. I thought it would be cool to get artists from here, other voices, to see if the themes and images they were thinking of were the same as I felt.”

As CRICE got to know respected older artists Seitu Jones and Ta-Coumba T. Aiken, who both have work in “The Shop,” he found “a lot of universalities through some of the stories. Some of the things Seitu was talking about from the 1960s could have happened this year. It was surreal.”

“The Shop” was welcome at Public Functionary, where director Tricia Heuring is committed to mentoring and supporting young curators, particularly curators of color. “I believe this is much needed in the Twin Cities and something I can do to create change,” Heuring wrote in an email. CRICE said, “I feel like the beliefs of this gallery are very clear and very strong. They are about giving access to people of color and creating authentic events.”

Supported by a 2017 Artist Initiative Grant from the Minnesota State Arts Board, CRICE put together an exhibition that explores blackness, culture, connection and self-reflection. It also celebrates black beauty and hair – most directly in Noah Lawrence-Holder’s animation “Undone!” and in two photographs from Bobby Rogers titled “Catch a Fade,” where black hair is a source of pride and strength. 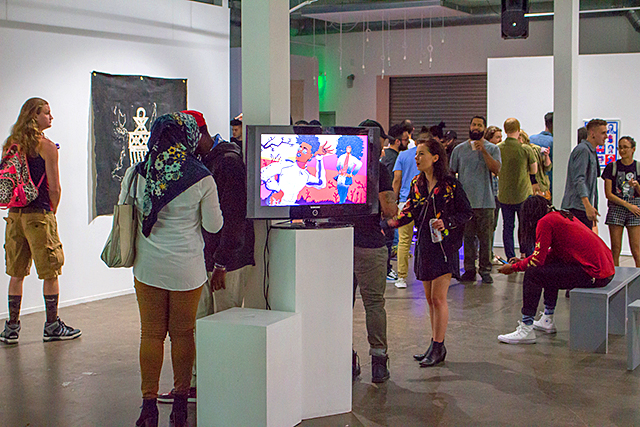 MinnPost photo by John Whiting
Opening night of “The Shop” at Public Functionary.

“A lot of people I grew up with are doing creative things and killing it,” CRICE said. “There’s no reason we shouldn’t have a robust arts scene here. Everybody says it’s so creative, but then people don’t want to go out and do things because there’s not that much going on. So I needed to do this.”

Of course, we had to ask CRICE who does his hair. “Me and my barber,” he said. “His name is Dre. Shout out to Dre over at Loc Starz in Bryn Mawr. It’s very popular. I snuck in today and he got me in. I knew I had to get it right for the show.”

“The Shop” continues through July 15. Go here for the hours and artist descriptions. On Thursday, July 13, Public Functionary will host an artist conversation called “Shop Talk” starting at 7 p.m. CRICE and a panel of Twin Cities artists, including some from the show, will discuss what it means to create art and space for art and expression as black artists/creatives in the Twin Cities.

Starts tonight (Wednesday, July 5) at the Walker: “Reshaping Our World: Cinema Without Borders.” The travel ban targets majority Muslim countries and affects many Minnesota immigrants and refugees. In response and solidarity, the Arab-American arts organization Mizna and the Walker have joined forces to present a series of five films from Africa and the Middle East that counter stereotypes with human stories. Tonight: “A Stray,” starring a largely local cast of Somali American actors. (We gave it a brief review last October.) The film will be introduced by state Rep. Ilhan Omar and Ifrah Mansour, a member of the cast. 7:30 p.m. FMI and tickets ($10/$8 Walker members, students and seniors).

Thursday at Magers & Quinn: Terry Tempest Williams presents “The Hour of Land: A Personal Topography of America’s National Parks” The latest from the author of “Refuge” and “When Women Were Birds” is a literary celebration of our national parks and a manifesto on why wild lands matter to America’s soul. 7 p.m. Free.

Friday at Studio Z: The All Originals Jazz Series: The Illicit Sextet. The series created and curated by trumpeter/Flumpeter Steve Kenny is back for its fourth season, with even more original music and world premieres. Kenny is calling this performance “the Illicit Sextet’s Greatest Hits,” and they have 25 years of music to choose from. With Paul Harper on saxophones, Chris Lomheim on piano, Nathan Norman on drums, Dave Roos on guitar, Tom Pieper on bass and Kenny on Flumpet, his all-original trumpet/flugelhorn hybrid. Doors at 7:30 p.m., show at 8. $10 online or at the door.

Friday and Saturday at the Bryant-Lake Bowl Theater: Danger Boat Productions Presents “Conundrum: An Improv Show of Philosophical Quandaries.” Tane Danger and Brandon Boat, creators of The Theater of Public Policy, are back with a new idea: exploring questions without easy answers, then adding improvisational comedy. Questions like “Would you rather be able to read minds or to fly?” and “How many dates can you go on with someone and still break up with them via text?” Come prepared with a conundrum or two of your own. 7 p.m. FMI and tickets ($12 advance, $15 door).

Tuesday (July 11) at Vic’s Dining: An Evening of Travel Talk with Kris & Tom of TravelPast50.com. Bring your questions about travel in the era of travel bans. After selling their home and most of their possessions in 2010, Tom Bartel and Kristin Henning – the former owners and publishers of City Pages and The Rake – started traveling and have never stopped. If you have a question, they’ll probably have an answer, and a good one. 7-9 p.m. Free.

Passes and tickets to the 2017 Minnesota Fringe are available now, and the new website is up and running. A VIP Pass ($200) gives you access to as many shows as you can squeeze in. Quantities are limited. Day passes ($16) and individual show reservations ($3.75) are also available. 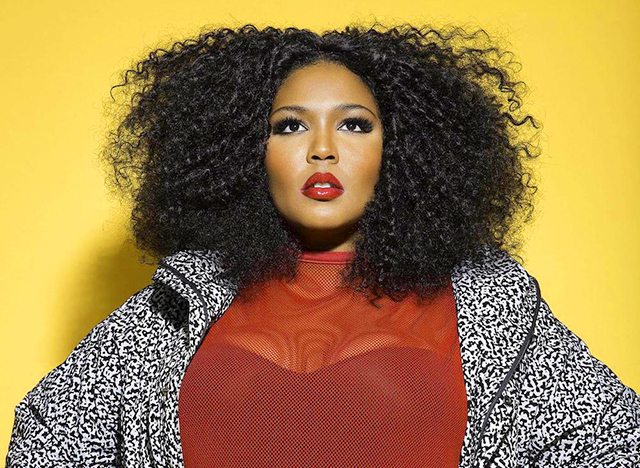 We’ll be writing more about the Fringe soon. But this show already stands out: “It Can’t Happen Here: A Benefit Production for ACLU” at the Ritz Studio Theatre. This will be an abbreviated version of the Federal Theater Project’s 1936 adaptation of Sinclair Lewis’ dystopian political novel – the one the New York Times called “the classic novel that predicted Trump.” Like George Orwell’s “1984,” it became a best-seller in the wake of the presidential election. This could turn out to be a very hot Fringe ticket. Profits from the whole run – all five shows – will go to the ACLU. Everyone will work for free.

Public Functionary introduces a new young curator; ‘It Can’t Happen Here’ is coming to the Fringe