The Minneapolis-St. Paul International Airport is more than a pass-through in and out of the state. Especially for visitors, it’s a first impression of Minnesota and Minnesotans, who we are and what we stand for. “It’s a gateway to Minnesota arts and culture, and our arts economy,” according to Robyne Robinson. The former senior news anchor for Fox 9 has been director of Arts@MSP, the arts and culture arm of Airport Foundation MSP, since 2013.

Under Robinson’s watch, the airport has gotten artier. Terminal 1-Lindbergh, the main terminal, now has colorful mosaics in restrooms along the Airport Mall and on concourses E and F, all commissioned from Minnesota artists. It has the first state-of-the-art film screening room in any major U.S. airport, showing short films and documentaries around the clock including “MN Original” episodes from TPT. It has live music in the Mall, and the musicians are paid. (Here’s the Call for Musicians page.)

A private reception in late July showcased the latest phase in the airport’s arts initiative. Several new works, commissioned from Minnesota artists, have been installed in the Terminal 2-Humphrey expansion between gates 10 and 14.

Hopkins-based artist Philip Noyed’s “Leap of Joy,” “Aurora Borealis” and “L’Etoile du Nord” (The Star of the North) are large, luminous, rainbow-hued and unmissable. “Leap of Joy” starts at the floor, angles upward, fractures into floating diamonds that follow the arc of an airplane taking off, and ends in a “Rainbow Leaper,” a figure meant to represent possibilities. “Aurora Borealis” is a wall of rainbow-covered chevrons 60 feet long and 6 feet tall, with a lighted rainbow diamond at its center. The 6-foot Star suspends from the ceiling nearby. It’s art on a grand scale, symbolizing freedom and welcome to all.

Two mosaics by Minneapolis artist Stacia Goodman continue the mosaics-in-bathrooms theme begun in Terminal 1. (Which is so smart, if you think about it. Where do most people beeline when they get off a plane? It’s the ultimate first impression.) Both are quintessentially Minnesotan. One is called “Winter Northern Lights,” the other “Summer Northern Lights.” In the first, the Aurora Borealis shimmers above snow and a dog sledder; in the other, it swirls above a Northern lake and loons. When you see them, take time to notice the details, and Goodman’s use of unusual materials.

Edina sculptor and jewelry designer Danny Saathoff’s installation, “Migration,” may be the most provocative and intriguing of the bunch. Two dozen small, illuminated zeppelin-like airships hang from the ceiling along the windows and above the heads of people seated below. Each is intricately crafted from metal, fabric, wood and wire. Is it a flock of mechanical birds? A scene from a science-fiction movie? An invading alien force? A school of fish? Saathoff thinks we should see in “Migration” whatever we want to see. 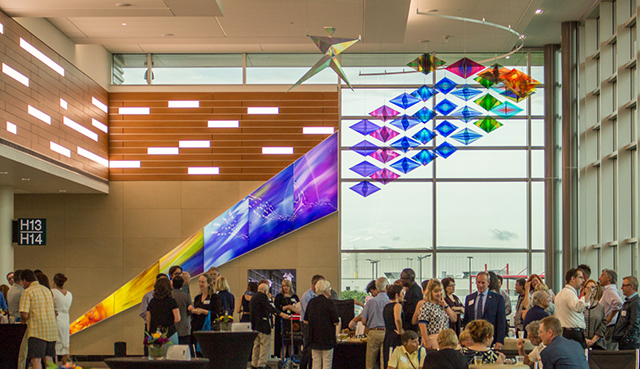 The arts and culture program at MSP Airport is ongoing, with a master plan in place. At the July event, Dennis Probst, MAC’s chief operating officer, noted that the program is meant to provide the “best passenger experience,” to “surprise and delight,” to “create an identity” for the airport and to form “personal connections” with visitors. Most people won’t care about the strategy behind the art, but they will, it’s hoped, take a moment to admire it, wonder about it and enjoy it.

There’s more to come. Robinson promised that “by 2020, we’ll have a signature piece in Terminal 1, created with help and input from the community.” Something that will communicate our identity as a state. Is that even remotely possible? It will be interesting to see.

Under way: Minnesota Fringe Festival. Under new Executive Director Dawn Bentley, the Fringe appears to be running like a well-oiled machine. Even the return of Sean Neely— whose pedophilia-themed show got him tossed out of last year’s Fringe lineup, which led to a lawsuit, which was followed by the departures of then-ED Jeff Larson and associate director Ann B. Erickson — turned out OK; reviewers gave it high marks, though some found it disturbing, and its five-show run is over now. We aren’t reviewing Fringe shows, but the Star Tribune and City Pages and Pioneer Press and plenty of others are. Be sure to sign up for the Daily Fringe newsletter if you haven’t already. Ends Sunday, Aug. 13, so there’s still time to pack in some comedy, drama, dance, a musical and a head-scratcher or two. FMI.

Tonight (Wednesday, Aug. 9) at the Film Society’s St. Anthony Main Theater: “Whitney: Can I Be Me.” The Minnesota premiere of the unauthorized Showtime documentary about the superstar singer and the forces that contributed to her sad end at age 48. Co-presented by Sound Unseen and the Film Society of Minneapolis/St. Paul. 7 p.m. FMI and tickets ($10/8 members).

Tonight at Norway House: 5 På Tvers (5 Across). This is not something you’ll hear or see every day. Presumably in town for the National Flute Association Convention, the Norwegian flute quintet will premiere its latest commissioned work by composer Bjørn Bolstad Skjelbred. In the Galleri, where you can also view the current exhibition, “Traditional Norwegian Weaving: American Reboot,” with 40 pieces based on several traditional Norwegian weaving techniques, updated. 6 p.m. FMI and tickets ($10, $5 members).

Friday at the Cedar: Centavrvs. The Mexico City band combines Mexican corridos (folk ballads) and Latin rhythms with electronic beats, reinventing traditional music and pulling it forward. They call their sound “neoregional electronica,” and it’s danceable to the core. “We want to make music that doesn’t repeat itself,” a band member said in a documentary, “That retakes stuff that is forgotten, maybe a bit dusty, but has a value worth rescuing.” With DJ Miguel Vargas of KFAI’s Radio Pocho. Doors at 7 p.m., show at 8. All ages, standing show. FMI and tickets ($15 advance, $18 day of show). 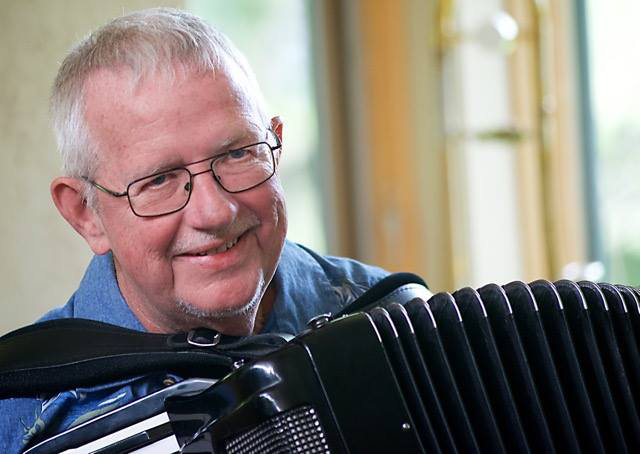 Photo by Andrea Canter
Denny Malmberg, one of the performers at this year’s Accordion-O-Rama in Zumbrota.

Saturday at Crossings at Carnegie: Accordion-O-Rama. This annual celebration of the squeezebox is the perfect excuse to drive to “the only Zumbrota in the world,” pop. 3,409, and enjoy the ambience of an old Carnegie library repurposed years ago as a wood-lined art gallery, gift shop and music venue. This year’s performers are retired South High band director Denny Malmberg and young Patrick Harison, button accordionist extraordinaire, leader of Patty and the Buttons, member of Jack Klatt and the Cat Swingers and the Cactus Blossoms, whose teacher was Denny’s dad, Larry Malmberg. This is a special evening and it usually sells out. 8 p.m. FMI and tickets ($18 advance/$20 door).