To create Mia’s first-ever exhibition of work by contemporary Somali artists, curator Jan-Lodewijk Grootaers didn’t have to look far; Minneapolis has the largest Somali population of any city in the U.S. “I Am Somali: Three Visual Artists from the Twin Cities” opens Saturday and spans three generations.

For Ifra Mansour, a multidisciplinary artist in her 30s, this won’t be her first show at the corner of 24th and 3rd Ave. S.; her one-woman play “How to Have Fun in a Civil War” was featured at the Children’s Theatre in 2016. Mansour’s “Can I Touch It” is a multimedia installation of film, audio, fabric and willow branches. Aziz Osman is in his 60s; he arrived in Minnesota in 1991, part of the first wave of Somalis to resettle here. His work is figural and semi-abstract. Hassan Nor is in his 80s; he resettled in the U.S. in 2002. His drawings depict narratives of daily life before the Somali Civil War and scenes of exile and migration.

Grootaers commented in a statement that “their work counters the widely held idea that art by Muslims is non-figural,” and that the artists “examine identity in a personal, vulnerable way, which is recognizable across cultures and religions.”

The three artists’ work will be displayed alongside traditional objects borrowed from the Somali Museum of Minnesota that illustrate daily life in Somalia, including milk containers, a pair of sandals, a camel bell and a Qur’an stand.

On Oct. 26, Mansour, Osman and Nor will take part in a panel discussion at Mia about art-making in Somali society and being an immigrant in the United States, among other topics. The talk will be moderated by U of M sociologist Cawo Awa Abdi and Ahmed Ismail Yusuf, author of “Somalis in Minnesota.” 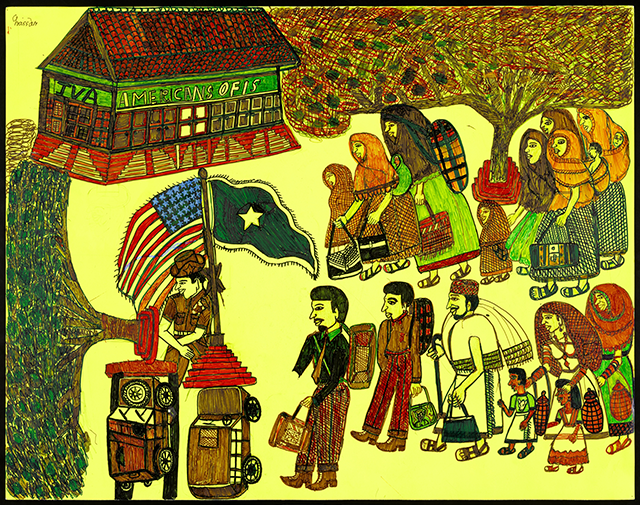 Collection of the artist © Hassan Nor
Hassan Nor (b. 1936) Untitled (Refugees II), marker and colored pencil on poster board.

AARP Minnesota and Pollen have released their second annual “50 Over 50” list, honoring 50 inspiring and accomplished leaders from across Minnesota who are making significant contributions and challenging beliefs about aging. There are honorees in five categories: Nonprofit, Arts, Business, Community and Disruption. You can meet them all here online, but we’re going to call out the 10 who are making the arts better for all of us.

Nancy Chakrin’s “Healing Blue Waters” collection of paintings has been traveling to medical centers for 17 years; her recent projects on yoga are exhibited in hospitals and wellness centers. In 2012, she was chosen as one of the University of Minnesota Buckman Fellows for Leadership in Philanthropy. Dr. Pamela Paulsen helped launch the Perpich Center for Arts Education in the early 1980s and today directs its professional development and resource program, helping teachers integrate the arts into the classroom. Steve Heckler co-founded the Twin Cities Jazz Festival and grew it from a small, six-hour event in 1999 to a three-day extravaganza that draws more than 40,000 Minnesotans to downtown St. Paul each summer. Lutsen artist Tom Christiansen’s gallery and bronze-casting studio, Last Chance Fabricating, is a North Shore welcome center. Minneapolis glam rocker, writer, painter and filmmaker Venus DeMars is one of our region’s first publicly trans artists, coming out as transgender more than 20 years ago.

Opens tonight (Thursday, Aug. 17): “Philemon and Baucis – Planet in Peril: A Picnic Operetta.” Now in its ninth summer, Mixed Precipitation Theater’s Picnic Operetta brings music, storytelling, and food to parks, farms, vineyards, orchards and community gardens across the metro and beyond. This year’s production is a new adaptation of Haydn’s rarely performed 1773 marionette opera, with music from Haydn’s “Creation” and the rock group Queen. Elizabeth Windnagel and Mixed Precipitation’s artistic director Scotty Reynolds have turned it into a space-age adventure that explores fear, displacement, and hospitality to strangers from another world. A five-course tasting menu of locally-grown, performance-inspired bites will be served during each show. 7 p.m. at the Dodge Nature Center in West St. Paul. Continues through Sept. 24 in various locations in St. Paul, Minneapolis, Babbitt, Eagan, Hastings, Wykoff and Winona. FMI and reservations (seating is limited). Or call 1-800-838-3006. Suggested donation $10-20 per person. No one turned away for lack of funds. 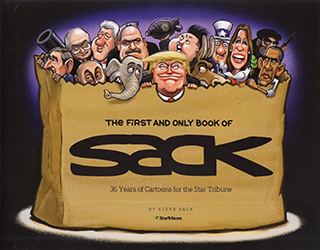 Tonight at the Minneapolis Central Library: Talk of the Stacks: Steve Sack. The longtime editorial cartoonist for the Star Tribune won a 2013 Pulitzer Prize and the Overseas Press Club of America’s Thomas Nast Award for best international cartoons published in 2016. But his most glaring moment in the spotlight was probably Aug. 4, when the Mooch retweeted his cartoon about … the Mooch. Sack has a new book, “The First and Only Book of Sack: 36 Years of Cartoons for the Star Tribune,” available tonight at the library, through the paper’s online shop, and at the Strib’s State Fair booth later this month. Some of the most interesting talks we’ve attended have featured cartoonists (Stephan Pastis, Roz Chast, Art Spiegelman) and we’re great admirers of Sack, so this should be a memorable evening. Doors at 6:15 p.m., program at 7. Free and open to the public. Seating is first-come, first-served.

Tonight on your teevee: Project Runway Season 16 begins. Why do we care? Besides the obvious reasons – the irrepressible Heidi Klum and the avuncular Tim Gunn (“Make it work!”), Nina (sometimes mean-a) Garcia and Zac Posen; the crazy clothes; the dwama – we have a contender: Minneapolis-based designer Samantha Rei is one of this year’s contestants. Also, this is the first year the show will feature models from sizes 0-22, and everyone will have to design for them. (Rei already does that, which should give her an edge.) For this, we can thank Tim Gunn, whose editorial last September in the Washington Post took designers to task for refusing to make clothes to fit American women. There’s another local connection in the new season: the promo video with Lizzo. And here’s the season trailer, with the usual teases of scandal and tears. 7 p.m. on the Lifetime channel. No cable? Clubhouse Jager will host a free screening from 6:30-9 p.m.

Friday at the Cabooze Outdoor Plaza: Michael Franti & Spearhood Love Out Loud Tour 2017. If you enjoyed soul-rocker/singer-songwriter and musical omnivore Franti at the 2016 Twin Cities Jazz Festival (where he drew a huge crowd), here’s another chance to see him outdoors, except not for free. He’ll probably have a few things to say about peace, social justice and the current political situation, and for sure he’ll deliver his big hit “Say Hey (I Love You).” 5:30 p.m. 18+. FMI and tickets ($40).

Sunday at Caponi Art Park: Kevin Kling and Simone Perrin. An evening of stories and music at the Art Park’s Theatre in the Woods, a large outdoor amphitheater nestled in a hilly landscape beneath a canopy of trees. Kling and Perrin perform often together and have an easy camaraderie. Kling’s autobiographical stories are for everyone and they never get old. This will be a genuinely family-friendly experience, entertaining and set in the beautiful Minnesota outdoors. 6:30 p.m. Tickets here ($5; 12 and under free).