Many people get their first and sometimes only glimpses of foreign countries and cultures through film. Watching images flicker on screens and reading subtitles while hearing the sounds of other languages can take us places we’ve never been, broaden our view of the world and let us know that people are people, no matter where they happen to live. They have families and jobs, joys and sorrows, good days and bad days. Just like us.

In our current political and social climate, when Arabs, Muslims and immigrants are vilified, hate crimes are on the rise, and the latest round of travel bans will prevent most citizens of seven nations from entering the U.S. indefinitely, the Mizna Arab Film Festival is more necessary than ever. Now in its 12th edition, the festival will take us into the lives, homes and stories of people in Lebanon, Syria, Palestine, Yemen, Iraq, Tunisia, Egypt, Jordan and Morocco. Starting at the Walker, moving from there to the Film Society’s St. Anthony Main Theatre, it will present two dozen indie Arab films, all Minnesota premieres, from tomorrow (Wednesday, Sept. 27) through Sunday, Oct. 1.

Opening night at the Walker features “Tramontane” from Lebanon, about a young blind man who discovers that his identification card is a forgery. The opening night reception is a multimedia album release and concert on the Garden Terrace by area Syrian electronic musician Hello Psychaleppo. Other highlights include “The Preacher,” an Egyptian box office hit from director Magdy Ahmed Ali, who will be here for the screening and stick around for a Q&A; “The War Show,” which chronicles the terrible fate of Syria through the experience of a small circle of friends and journalists; “Withered Green,” the North American premiere of a film about gender in Egypt; “Dreaming of Palestine,” an evening of short films and community story-sharing about the massacres at Sabra and Shatila in 1982 and the nearly 70 years of occupation; and the closing night’s “Solitaire,” which uses humor to show how tensions in the Middle East affect people’s personal lives. A filmmaker roundtable on Sunday will be catered by Shish Restaurant. A Saturday morning series of animated shorts is suitable for kids 12 and up.

Last year’s Mizna Arab Film Festival took place before the 2016 elections. A lot has changed since then. For increasing awareness, providing perspective – and for sheer artistry, let’s not forget that – we’re giving this a big thumbs up.

Here’s the complete schedule, with links to times, tickets and trailers. Here’s the Festival’s trailer, with music by Hello Psychaleppo.

Lesley Nneka Arimah named one of ‘5 Under 35’

We hope Lesley Nneka Arimah is getting used to the spotlight. Just last week, her debut short story collection “What It Means When a Man Falls From the Sky” was named one of six finalists for the Kirkus Prize, which carries a $50,000 purse. On Monday, the UK-born, Nigeria-raised writer now living in Minneapolis and teaching at the U was named to the National Book Foundation’s 2017 “5 Under 35” list of young debut fiction writers “whose work promises to leave a lasting impression on the literary landscape.”

Each of the five – all women this time – was selected by a National Book Award winner, finalist or previous “5 Under 35” honoree. Chris Bachelder, a 2016 finalist for “The Throwback Special,” picked Arimah. Each honoree will receive a $1,000 prize.

Arimah earlier won an O. Henry Prize for her short story “Glory,” which is included in “What It Means When a Man Falls From the Sky.”

If you missed her reading at the Weisman earlier this month, you can catch her Monday evening (Oct. 2) at the Brookdale Library in Brooklyn Center, where she’ll appear as part of the Club Book series. FMI.

Tonight at the Weisman: Alan Shapiro reading. The acclaimed poet, novelist and memoirist has written more than 13 volumes of poetry. His “Reel to Reel” was a finalist for the 2014 Pulitzer Prize; his latest is “Life Pig.” 7 p.m. Free and open to the public.. 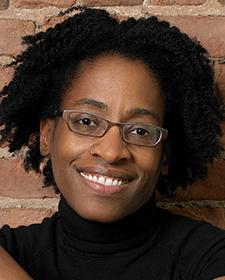 Wednesday at the Fitzgerald Theater: Talking Volumes: Jacqueline Woodson. Winner of the National Book Award for “Brown Girl Dreaming” (which also took the Coretta Scott King Award, the Newbery Honor Award and the NAACP Image Award), the prolific Woodson is out with her autobiographical novel “Another Brooklyn.” Woodson has also written many picture books. She recently concluded a two-year term as the Poetry Foundation’s Young People’s Poet Laureate. Kerri Miller will host. 7 p.m. FMI and tickets ($23-50).

Thursday through Sunday at the Avalon Theatre: “Sabra Falling.” Pangea World Theater presents Ismail Khalidi’s play about a Sabra refugee camp in war-torn Beirut. The play opened earlier this month, marking the 35th anniversary of the massacre of Palestinian refugees at the Sabra and Shatila camps. Khalidi takes audiences to the city of his birth at one of its darkest moments. With Adiyn Carreras, Lina Jamoul, Michael Karadsheh, Adri Mehra, Jawdy Obeid and Mohamed Yabdri; directed by Dipankar Mukherjee. The Avalon is Heart of the Beast’s space at 1500 E. Lake Street in Minneapolis. 7:30 p.m. Thursday through Saturday, 2:30 p.m. Sunday. FMI and tickets ($18-12).

Saturday at SooVAC: Opening reception for “Collect Call 3: Exploring Art Patronage.” What kinds of things do srt collectors collect, and why? What sparks a collection? The third iteration of this popular show spotlights several local collectors including Lori Barbero, Chris Barfield and Benjamin Brown, Connee Mayeron and Fuller Cowles, Herman J. Milligan, Robyne Robinson, and Tom Siler and Joan Vorderbruggen, all of whom will be sharing works from their private collections. Reception from 6-9 p.m. FMI. Ends Oct. 21. 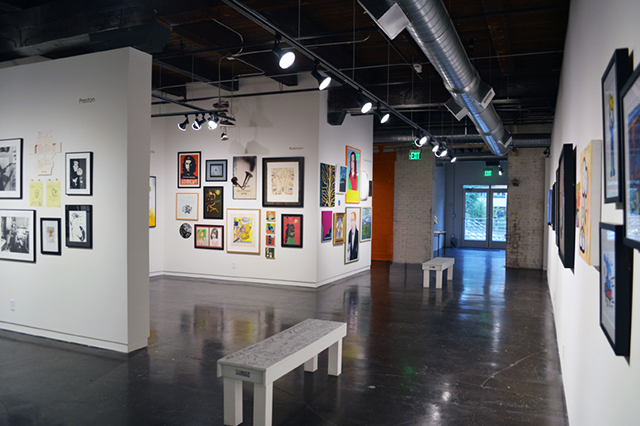 Courtesy of Soo Visual Arts Center
The opening reception for “Collect Call 3: Exploring Art Patronage” is this Saturday at SooVAC.

“An Evening with Kevin Smith.” Nope, not the Minnesota Orchestra president and CEO (though an evening with him would be pretty darned interesting), but the Kevin Smith who brought us “Clerks,” “Chasing Amy,” “Dogma,” and “Jay and Silent Bob Strike Back,” among others. The writer, author, actor, comedian, podcaster and film director will be at the Acme Comedy Company on Tuesday and Wednesday, Nov. 28 and 29, for two shows each night. 18+. FMI and tickets ($38.85). Add a dinner reservation for preferred seats.