Accepting her Lifetime Achievement Award at the end of Monday’s Ivey Awards, Ten Thousand Things Theater founder and artistic director Michelle Hensley, who will step down at the end of the current season, called for more transitions in theater leadership to be filled by women – especially women of color. “Who is in charge matters,” she told the cheering crowd. “Women think differently about things like power, rehearsal time and family time, and casting and gender.” Introducing Hensley, Regina Marie Williams called her “a fierce local hero.”

Accepting her Emerging Artist Award, Meghan Kreidler, currently on stage in Theater Latté Da’s “The Man of La Mancha,” thanked Mu Performing Arts for helping her discover her Asian-American identity. “What I’ve learned most,” she proclaimed, “is screw fear!”

The Lifetime Achievement and Emerging Artist awards were the final honors handed out in the efficiently staged and run 75-minute show, which combined ceremony with live performances of songs and excerpts from Chanhassen’s “Grease,” Mu and Park Square’s “Flower Drum Song,” Frank Theatre’s “Citizen: An American Lyric,” Daleko Arts’ “The Rink,” Mixed Blood’s “Vietgone” and the Jungle’s “Fly By Night.” For the finale, the young cast of Stages Theater Company was joined by the evening’s award winners and presenters for a performance of “You Will Be Found” from the musical “Dear Evan Hansen.”

Held at the State Theatre, hosted by Mark Benninghofen and Thomasina Petrus, the 2017 Iveys was a noisy, fun and festive evening, with a poignant pause to remember and reflect on the theater makers and supporters we lost during the year, most recently multifaceted artist J. Otis Powell and philanthropist Angus Wurtele. Faces flashed on a screen as Petrus channeled Billie Holiday while singing “I’ll Be Seeing You.”

Scott Mayer, who founded the Iveys in 2004 and produced it for the next 12 years, was in the crowd, seeming perfectly happy about no longer running things.

The 2017 Iveys were handed out in 11 categories. The categories change from year to year in what has always been less of a competition, more of a celebration – an annual excuse for a big theater party, or “theater prom,” as some people call it. Here are this year’s categories and winners: 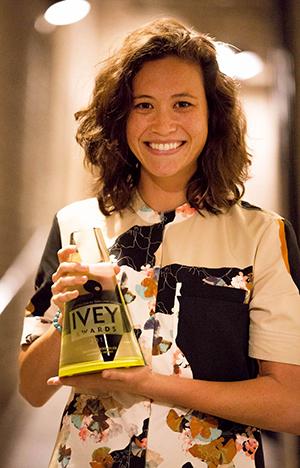 Courtesy of the Ivey Awards
Meghan Kreidler backstage at the Iveys.

Actor: Steven Epp for his role as Tevye in Ten Thousand Things’ “Fiddler on the Roof”

Actors: Sun Mee Chomet and Sherwin Resurreccion for their roes as Diana and Max in Mu Performing Arts’ “The Two Kids That Blow S*** Up”

As always, the Iveys were decided by the Ivey evaluators, more than 150 volunteers who attended more than 1,100 performances and gave written and numerical feedback. If you’d like to be an evaluator, register here.

Tonight (Wednesday, Sept. 27) at Common Good Books: Andrea Pitzer presents “One Long Night: A Global History of Concentration Camps.” For more than 100 years, at least one concentration camp (and sometimes many) has existed somewhere on Earth. Drawing from archival records and interviews on four continents, author and journalist Pitzer explores the chronological and geopolitical history of concentration camps. Not an easy evening, for sure, but an important one. 7 p.m. Free and open to the public.

Thursday at the Duluth Art Institute: Opening reception for “In Situ: Studio 101 Artists” and “Forever Home.” Artists Dorothea Diver, Lee Englund, Constance Johnson, Cot LaFond, Dale Lucas and Larry Turbes share a studio in downtown Duluth and come together weekly to create. Their show at DAI re-creates their studio environment, complete with easels, paint and an oriental rug. Their paintings are hung salon-style, and every Wednesday from 4:30 to 6:30 p.m., the artists will be there, live-painting models. “Forever Home” features before-and-after photos of adopted pets and their people, along with works by other artists in a range of mediums showing adopted pets in their forever homes. Reception from 5 to 7 p.m. Shows close Oct. 27. 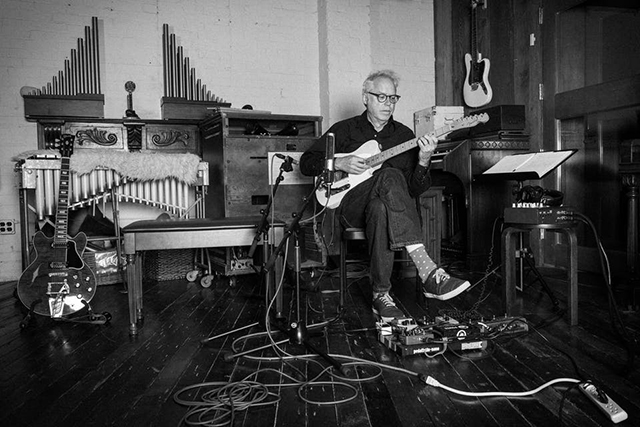 Courtesy of Monica Frisell
Bill Frisell will join The Bad Plus to perform this Friday at the Walker Art Center.

Friday at the Walker: The Bad Plus Bill Frisell ’85 – ’95. Reasons not to miss this: It’s your second-to-last chance to see The Bad Plus in Minnesota in its original incarnation – Reid Anderson on bass, Ethan Iverson on piano, Dave King on drums – before Iverson goes out on his own and Orrin Evans takes over the piano bench. (Your last chance is in December, when they return for their usual, this time final Christmas residency at the Dakota.) They’ll be performing their own unpredictable, signature versions of classic recordings by superstar guitarist Bill Frisell. And Bill Frisell will join them. This is a Walker commission, a world premiere, and a once-in-a-lifetime thing. 7 and 9:30 p.m. FMI and tickets ($30-45; members $24-36).

Friday at the Southern: Opening night of Sam Graber’s “mONSTER.” As much as we all use the internet – you’re using it to read this, we used it to make this – most of us by now have some general sense, or knowledge based on experience, that the web is not our friend. How did it evolve into what it is today: pervasive, ever-present, often destructive? Is online hate a new form of violence, or has it always been within us, waiting for a way out? Set in an increasingly claustrophobic dorm room in 1994, when the web first came into common use, this world premiere play is a partnership between Swandive Theatre and award-winning playwright Graber. 7:30 p.m. FMI and tickets ($12-24; ARTshare members free). Ends Saturday, Oct. 7.

Saturday at The Museum of Russian Art: Interference New Music Collective. TMORA is a small, beautiful museum and an intimate place to hear live music. Many of its concerts to date have been classical and/or Russian-flavored. Interference, an ensemble of three principal faculty members from American University in Washington, D.C., blends classical and jazz with technology: amplification, real-time processing, sound synthesis and visuals. Cellist Nancy Snider, saxophonist Noah Getz and composer Steve Antosca will bring their lush aural soundscapes to TMORA in a performance that will start in the main gallery and move throughout the museum. There are Russian connections; Interference has performed in Moscow, and Snider recently returned from a fellowship in St. Petersburg, as did TMORA’s director Vladimir von Tsurikov. 7 p.m. FMI and tickets ($10-20). On Friday, Interference will give a lecture-demonstration at MacPhail’s Antonello Hall. 7 p.m., free and open to the public, with treats following the event.