Art Shanty Projects is trying something new: a membership program. A Kickstarter launched last Friday with a goal of raising $15,000. Rewards range from your name on the On-Ice print program to member events, an On-Ice Sneak Peek and your name on a shanty you sponsor. The aim of the program is to keep Art Shanty Projects free for visitors and to fairly compensate artists for their work designing, building and programing their shanties.

Historically, Art Shanty Projects, like many arts organizations, has relied on grants.

“We need to diversify our income stream so we can continue to support the artists with competitive wages,” community outreach director Tom Loftus said in a statement. Plus grants have become less predictable. Art Shanty Projects hopes that memberships will ensure long-term sustainability.

For the 2018 event, Art Shanty Projects will move to Lake Harriet (Bde Unma) in South Minneapolis, where its four-week run (Saturdays and Sundays from Jan. 20-Feb. 11) will include Super Bowl weekend. It’s estimated that 25,000 people will visit. Past Art Shanties have been on White Bear Lake, and before then on Medicine Lake in Plymouth. The very Minnesotan festival began there in 2004, when a small group of artists built a collection of structures on the ice. It’s expected that the event will stay on Lake Harriet until 2020. Most of the artists and visitors live in Minneapolis.

“Art Shanty Projects operates on a shoestring and has asked the same from its artists,” said board member Ilana Percher. “This year, attendance is likely to be larger than ever, yet our budget and artist stipends have not grown. Any increase in our budget means not only can we stay in the black, but we can put more into the program and the artists.” Donations of any size are welcome; $25 makes you a member.

The 2018 artists and performers have been announced. The 20 shanties include places to play Twister and bingo, explore the belly of a whale, learn about monarch butterflies, park your smartphone (and explore the Shanties with a hand-drawn map), watch very short performances in a very small space, knit, and make wishes.

If you had $50,000 to create a work of art for the Commons – something that encourages individual and community engagement, that brings people together, that helps invigorate the Commons as a site of commonality – what would it be?

You have until Friday, Nov. 17, to come up with an idea and submit a proposal for the 2018 Creative City Challenge. Presented by the Arts, Culture and the Creative Economy program of the City of Minneapolis in partnership with Northern Lights.mn and The Commons, the Challenge is a showcase for local creative talent. Minnesota-resident architects, landscape architects, urban designers, planners, engineers, scientists, artists, students and individuals of all backgrounds may apply. The final project will be unveiled and featured at the opening of the all-night arts festival Northern Spark on June 6, 2018, and remain in the Commons through October 15.

Three finalists will each receive $2,500 to create full proposals. The winning proposal will receive a $50,000 commission to execute the project. Go here FMI. Visit the Commons and check out the winner of the fifth Creative City Challenge, “Orbacles.” Here’s a video about it.

An information session is scheduled for 6 p.m. Tuesday, Oct. 17, at 147 Holden Ave. in Minneapolis.

Maybe you’re thinking, “Wait – didn’t the Creative City Challenge used to have something to do with the Convention Center? Didn’t the winner used to be on that big green plaza across the street?” Yes to both, for the first four years. It moved to the Commons in 2017.

Tonight (Thursday, Oct. 12) through Sunday at Mixed Blood Theatre: “How to Use a Knife.” Set in a busy New York restaurant kitchen, Will Snider’s play is profane and hilarious, dark and disturbing. Manic from the start – it opens in a swirl of movement and noise against a burst of percussion – it’s as timely as theater can be. There’s a pair of good-natured, undocumented Guatemalan line cooks (Jake Caceres and Raúl Ramos); a silent, industrious African dishwasher (Ansa Akyea); a clueless, self-centered white owner (Michael Booth); a surly, volatile half-Puerto Rican chef (Zack Myers); a young white runner/busboy (Maxwell Collyard) who wants to be a writer; and an ICE investigator (Taous Khazem), whose mere presence is a threat. Both the chef, a recovering alcoholic, and the dishwasher harbor awful secrets. It’s a suspenseful slice-of-life with glimpses into horrors we can’t imagine here. We saw it and liked it very much. 7:30 p.m. FMI and tickets (free-$25); 651-338-6131. Ends Sunday with a matinee. 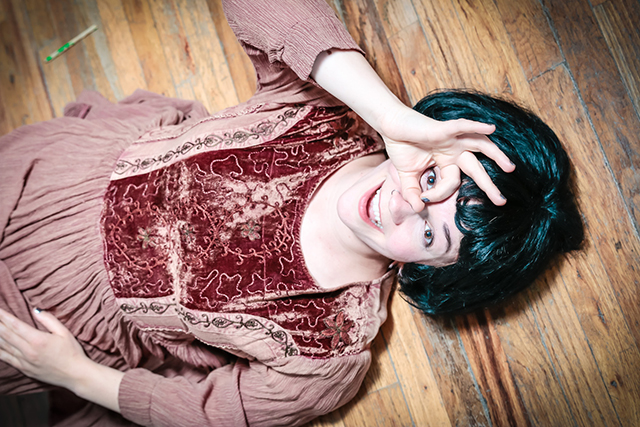 Photo by Matthew Glover
Kristina Fjellman as Wanda Gag in “In The Treetops.”

Tonight (Thursday, Oct. 12) through Sunday at Open Eye Figure Theatre: Sandbox Theatre’s “In the Treetops.” If the words “hundreds of cats, thousands of cats, millions and billions and trillions of cats” ring a bell, you’re probably familiar with a classic children’s book by New Ulm author and illustrator Wanda Gag. Sandbox has created a play about Gag’s years as a teenager and young adult. Filled with music, puppetry, song and movement, it’s for kids (8 & up) and grownups. 7:30 p.m. FMI and tickets ($5-40; pay-as-able at the door). Ends Oct. 15. If you haven’t yet been to Open Eye, it’s a magical place.

Tonight at the Cowles: Coming Out Party for “Out North: MNLGBTQ History.” If you thought the Stonewall riots in New York launched the gay revolution, you haven’t heard about FREE, one of the first LGBTQ college organizations in the nation, founded right here in Minnesota. Produced by Twin Cities PBS (TPT), “Out North” is the first feature-length film to document Minnesota’s LGBTQ history: the pioneers of politics, empowerment and pride; the places people gathered before gay venues were mainstream; the stories of our neighbors, friends and family members. See the film, stay for a party with the director. 7 p.m. FMI and tickets ($25); 612-206-3600. 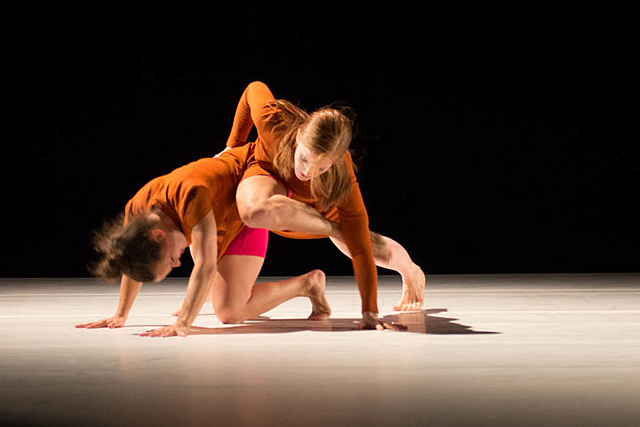 Courtesy of Rosie Herrera Dance Theatre
“Carne Viva,” which loosely translates as “open wound,” is a work for four dancers, brutal and visceral.

Saturday and Monday at MacPhail’s Antonello Hall: Minnesota Bach Ensemble: “Exuberant Winds and Water Gods.” Led by Andrew Altenbach, the Bach Ensemble will begin its 2017-18 season with works by two of J.S.’s many sons, C.P.E. and J.C.; Telemann’s Overture in C major; a Vivaldi concerto; and Bach’s Brandenburg No. 5. Tami Morse will be at the harpsichord. Here she is, playing the end of the Brandenburg V cadenza, known as “the Mt. Everest of harpsichord cadenzas.” Saturday at 3 p.m., Monday at 7:30 p.m. FMI and tickets ($30; $10 students).

Monday at Plymouth Congregational Church: Accordo. A sublime string ensemble composed of the Twin Cities’ top string players – the SPCO’s concertmaster, the Minnesota Orchestra’s concertmaster, and principals from both orchestras – Accordo opens its 2017-18 season with music by Barber (“Dover Beach,” Op. 3 for voice and quartet), Respighi (“Il Tramonto” for voice and quartet) and Dvorák (String Quartet in E-flat, Op. 97). Who’s the voice? Clara Osowski, the mezzo-soprano everyone is talking about. 7:30 p.m. FMI and tickets ($21-32.50); 651-292-3268. Or enjoy an informal, abbreviated version of the concert Tuesday night at Icehouse. FMI and tickets ($16; $12 students).

Art Shanty offers memberships; ‘How to Use a Knife’ at Mixed Blood