One of the oldest Bach societies in America is keeping it fresh. The Bach Society of Minnesota starts its 85th season tonight with a curiously named concert, artists from around the world and music by several composers that zigs among continents and centuries.

In its second year under German-born, Montreal-based artistic director Matthias Maute, and the first programmed entirely by him, the society will perform “Baroque Mississippi Diamonds: Come to the River” tonight at Hamline’s Sundin Music Hall, tomorrow in Long Lake and Sunday in Winona.

Why “Baroque Mississippi Diamonds”? Assistant conductor Marco Real-d’Arbelles explained: “Because of our location, the Twin Cities being by the Mississippi River. And the fact that all six performers on stage are from different countries, and they’ve been ‘united’ by the river.” The “diamonds” describe the music. The five movements of Jean-Baptiste Stuck’s “Les Festes Bolonnoises” are “French pearls at Versailles.” Two works by J.S. Bach are “musical gold from Germany.” Arias composed by Vivaldi for the Venetian opera, sung by Berraondo, are “Venetian splendor.” Clusters of melodies written in Peru, Bolivia and Argentina during the 16th through 18th centuries by European and indigenous composers, some who lived during the same time as Bach, are “South American jewels.” It’s Baroque music, so expect it to sparkle.

The society describes its 2017-18 season opener as “a portrait of the Twin Cities melting pot, and a reflection of our modern society.” Last year, Maute told Early Music America, “A concert shouldn’t be something we go to just because we’re civilized people. When we leave, something has changed in ourselves.” With Maute in the lead, the society will collaborate in spring 2018 with Ensemble Caprice, Maute’s Montreal orchestra, on its first-ever performance outside the U.S.

Intermedia Arts will sell its building

If you haven’t heard, Intermedia Arts has paid its salaried and hourly staff members – who were all laid off in September – for their final pay period. That was their first priority. An email sent earlier this week from Intermedia’s board of directors went on to say: “Beyond payroll, Intermedia has additional outstanding obligations that leave us with no choice other than to move forward with the sale of our building. We understand the magnitude of this decision and are committed to a process that mirrors the mission of Intermedia.

“In the coming weeks, we will secure advisors for the sale. As soon as the building is ready for listing, we will engage with the community to both listen and share information.

“As we prepare to list the building, we are working on alternatives to deliver Intermedia’s key programs. This is a work in progress; we promise to make announcements as soon as decisions are made regarding these programs.

According to the Star Tribune, the two-parcel property in the Lyn-Lake area of Minneapolis was last appraised at $1.5 million in 2016.

Tonight (Friday, Oct. 27) at the Bryant Square Recreation Center: Minneapolis Art Lending Library’s Fall Event. Stop by the rec center and browse a collection of 110 original artworks – paintings, drawings, prints, photographs, sculptures and works in ceramic by local and national artists. If you find one you like, check it out and take it home – like a library book, except you can keep it for three months. 5-8 p.m. FMI. Free. First-time borrower? Bring proof of your current address.

Opens tonight in the Solar Arts Building: 2017 AutumNE Member Art Show. Presented by the Northeast Minneapolis Arts Association, this annual exhibition formerly known as Fall Fine Arts features work by 150 NEMAA members. Peruse the paintings, photographs, sculptures and mixed-media art, all for sale, at tonight’s reception, with hors d’oeuvres by Chowgirls, a cash bar and live music. 6:30-10 p.m. FMI. Free. The show stays up through Nov. 5 and is open to the public Thursdays-Sundays.

Tonight at the Basilica of St. Mary and Sunday at the Ordway Concert Hall: National Lutheran Choir: The Holy Spirit Mass: Together in Hope. This major choral-instrumental work by Grammy-nominated Norwegian composer Kim André Arnesen had its world premiere last Sunday in Washington, D.C. Commissioned by the choir for the 500th anniversary of the Protestant Reformation, celebrating 50 years of dialogues between Catholics and Lutherans, its themes include mercy, grace, hope and mutual service to the world. At 8 tonight at the Basilica, 4 p.m. Sunday at the Ordway. FMI and tickets ($25-50, $10 students, 17 and under free). 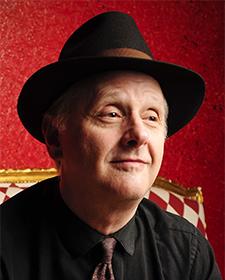 Saturday at Crooners: Arne Fogel: “September of My Years.” When singer Fogel does a themed show, he’s usually with a partner, like Maud Hixson or Jennifer Eckes, for songs and verbal back-and-forth. For this one, he’ll be on his own. Feeling pensive as he nears his 50th year as a working performer (singing, broadcasting, recording), he’ll perform the classic Frank Sinatra album “September of My Years,” whose title song starts like this: “One day you turn around and it’s summer, next day you turn around and it’s fall, and the springs and the winters of a lifetime – whatever happened to them all?” It’s going to get emotional. With Rick Carlson on piano, Gary Schulte on violin and Gordy Johnson on bass. 6:30 p.m. in the Dunsmore listening room. FMI and tickets ($15).

Opens Saturday at the Northern Pacific Rail Yard in Brainerd (free bus ride there and back): Pete Driessen: Trestle Support Systems. While the Soap Factory is closed for a $6.2 million renovation, its Rethinking Public Spaces project is raising its profile and expanding its reach to underutilized spaces throughout Minnesota. Monica Sheets’s “Collectively We Support Your Autonomy” neon sign on the Soap Factory’s roof is part of this project, and so is Driessen’s pair of monumental, site-specific installations, “Trestle” and “Trestle Worker,” in the Rail Yard’s Blacksmith and Boiler Shop. The installations include sound works composed by Michael Masura Flora. The bus leaves the Soap Factory at 2 p.m. and departs Brainerd at 8 p.m. FMI about the exhibit and link to sign-up for bus ride. Free.

Sunday at the Ordway Music Theater: Sir András Schiff. The Schubert Club International Artist Series starts its 2017-18 season with a legend. A Hungarian-born British pianist and conductor, Grammy and Gramophone winner, renowned interpreter of Bach, Beethoven, Mozart, Schubert and Schumann, and ECM recording artist (130 albums to date) knighted by Queen Elizabeth II in 2014 for his services to music, Sir András hasn’t played a Schubert Club recital in more than 20 years. On the program: Mendelssohn, Beethoven, Brahms and Bach’s English Suite No. 6 in D minor. 3 p.m. FMI and tickets ($32-71); 651-292-3268.