That Andrea Swensson’s first book starts in the year of Prince’s birth and ends in a visit with Prince at Paisley Park is not surprising. A music journalist, host of the Current’s “Local Show” and contributor to the Local Current Blog (and former music editor at City Pages, where she founded Gimme Noise), Swensson is a longtime Prince fan and student of his music and his life. When he died in April 2016, she was a primary online and on-air source of information. She shared her knowledge and her grief with the rest of us.

What’s surprising about “Got to Be Something Here: The Rise of the Minneapolis Sound,” just out from the University of Minnesota Press, is how much farther and deeper it goes, how richly detailed it is, how it captures a past at risk of fading away. In plumbing the story of what led up to Prince, Swensson explores the history of African-American music in north Minneapolis (so many bands!), the founding of The Way community center (now the site of the Fourth Precinct police station), the destruction of St. Paul’s Rondo neighborhood by I-94, the segregation that kept black artists out of clubs in downtown Minneapolis, and the racism that still plagues us. It’s an engrossing tale told in 200 pages, meticulously researched and echoing with the voices of dozens of people Swensson interviewed.

With the ink barely dry, Swensson said, “I wish I could add five more chapters.” We spoke by phone last Friday.

MinnPost: Take us back to the moment when the book began.

Andrea Swensson: The lightbulb came on about two years before I said I would write it. I went to a rehearsal at Secret Stash [in 2012]. They were getting ready to put out the “Twin Cities Funk & Soul” collection, and they were having the musicians come together and do a show at the Cedar. I remember walking down the steps into their space and seeing all these artists I’d only ever heard.

It was profound to see history come to life in front of me and realize that the artists are still here and active and performing. People like Wee Willie Walker; he plays at least a couple gigs a month. The Valdons had just reunited, and Sonny Knight was with them. Everyone was so excited, and all the memories were rushing to the forefront, maybe for the first time in decades.

But it stuck with me that someone does need to write this book, and it needs to happen soon. There’s a real urgency. That rattled around in my brain for about two years, and then [University of Minnesota Press editor] Erik Anderson reached out and asked if I had any ideas for a book, and I did. I started working on it in April 2014 and I handed in the manuscript this March.

MP: Did you start out writing the book it became, or did it change along the way?

AS: I had the idea at the beginning that this would be the definitive history of this community and all the people that contributed in any way – an encyclopedia. The more I researched, the bigger the social element became. You can’t tell this story without getting into the history of the Twin Cities and race relations and segregation and the construction of I-94 and the unrest in north Minneapolis in the late ’60s. These were all so intricately woven into these musicians’ lives, and the way the music persisted was really beautiful. 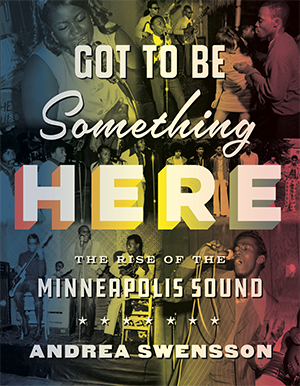 I realized that if I wanted people to understand why Prince getting onstage at Sam’s mattered – why that was such a triumph for him and for the city and the whole African-American music community – I couldn’t build that moment up without laying the groundwork. [Note: Sam’s became First Avenue soon after.]

It was a good time to learn this story myself. We’re grappling with so many issues right now that are so relevant to this history. It became obvious to me that I was having an awakening with my own understanding of race and privilege and the way our scene is laid out and what my role in it is. That made me want to get into the history – to understand how we got where we are now, what we can learn from the recent past, and what I could do to help other people understand it better. To help them learn more about it in a way that isn’t just a dry history. It’s a very alive story that’s full of music and passion and persistence and all these human stories.

MP: Did you ever have a moment of doubt, when you thought this was not your story to tell?

AP: Yeah, every day. That’s where I relied on letting other people help narrate it. I tell you a little bit about the big picture, but when we zoom in and talk about what Rondo was like, or what north Minneapolis was like in the ’70s, you see it through Herman Jones’ eyes or André Cymone’s. I’m not the one to take you there. I’m just sitting in the car next to them, writing down what they’re saying. I really tried to keep that in mind through the whole process. This is not my story. This is their story, and the focus always has to be on them.

Then there was the other element – that these stories are literally going to disappear if I don’t do this. I kept that at the front of my mind. Especially as time went on, I would interview someone and get the news a month later that they had passed away. It was really intense. That happened with David Hersk. Sonny [Knight] was a big loss. That added to the push to do the book, even if I had questions about it. I’m just really grateful that I was able to talk to everybody.

MP: Minneapolis has been discovering that we’re a lot more racist than we like to think we are, and we always have been. In your book, you write about how badly black bands and musicians were treated. Were you surprised by what you learned?

AP: I wasn’t, because I’ve heard current acts talk about their struggles and frustrations. People active right now on the hip-hop scene, and the pop R&B scene, in jazz and all these different areas say it’s easier to advance your career if you’re white. I’ve heard that over and over again. 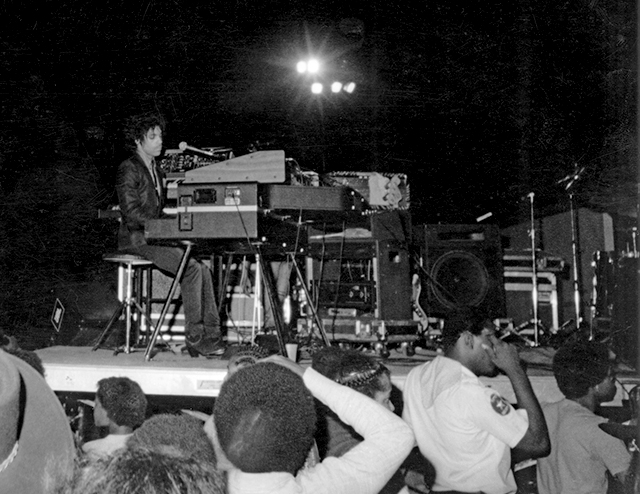 Photograph by Charles Chamblis, circa 1980/Courtesy of the Minnesota Historical Society
Prince performing at the Phyllis Wheatley Community Center.

What I didn’t know about were the technical and systemic and institutionalized ways this had happened for decades. That’s what propelled me to dive into the social part of it. We know things are off balance now, but how did this happen? Has it always been this way? Where did it begin? What are the big things that happened that made it this way?

There were definitely moments in the research that surprised me, about just how bad it was. But there were moments that surprised me in other ways. I felt the city [of Minneapolis] responded better in the ’60s than they would today. In the immediate aftermath of the first unrest in 1966, they didn’t call in heavily armored police. They blocked the street and backed off and let people calm down, and then they had a meeting so everyone could talk. It wasn’t this military thing. It was a community response and a dialogue, and we need to do that a lot more. There was more of a willingness to actually listen.

MP: Your book starts and ends with Prince. In a way, all roads lead to Prince. Was it fun for you to make those connections?

AP: Yeah. I had narrowed in on wanting to end when Prince plays First Avenue. I began [in the prologue] with Dick Clark saying, “This isn’t the kind of music that comes out of Minneapolis!” And me saying, “Well, actually, yes, it is!” Having these two bookends gave me a nice playground to find these little clues and ask, “What does this have to do with Prince?” And discover that this all has to do with Prince.

He was living in north Minneapolis when these events were happening, and this shaped his life and his world view. The school bus system and integrating the schools opened his eyes to different parts of the city. He was able to wander through them untethered, even though the generation immediately before him wasn’t.

He becomes a kind of character in the book, even though we don’t meet him until the book is over. We meet him in the epilogue. He’s just this little figure floating through all the stories, living his life as all this stuff is going on, and then he finally gets to have his big moment at the end.

Saturday, Oct. 28 at the Fitzgerald Theater: The Current Presents: The Rise of the Minneapolis Sound. The book launch party for “Got to Be Something Here” features music by Wee Willie Walker, Wanda Davis, the Valdons, the Original Family Band, and André Cymone, with Nooky Jones, PaviElle and Cameron Kinghorn. 8 p.m. FMI and tickets ($25-50).

Friday, Nov. 3 at Mid West Music Store in Winona: “Got to Be Something Here” reading and signing with Andrea Swensson. 7 p.m. Free and open to the public.

Wednesday, Nov. 15 at Magers & Quinn: “Got to Be Something Here” reading and signing with Andrea Swensson. 7 p.m. Free and open to the public.

‘Got to Be Something Here’ begins and ends with Prince