It begins with a funeral. Five mourners, weeping. Six chairs, an urn, a bag of ashes, a white cabinet shaped like a tombstone. A black cloth printed with “HOPE.” Has someone named Hope died, and are these her friends? Or has Hope itself died?

The latter seems likely. These are dark times. We’re battered by news of the world, of hurricanes and human misery in Houston, Florida, the Virgin Islands and Puerto Rico, genocide in Myanmar, a truck bomb in Somalia, a mass shooting in Las Vegas, horrible fires in California, madness in Washington, and a Worthington, Minnesota, father deported back to Guatemala last week, leaving his wife and children behind. It’s too much.

Using music, their bodies, their faces, costume changes and a few props, The Moving Company presses pause on all that is heartless, ugly and cruel. Described as “a raw new creation of movement theatre” (though it doesn’t seem raw, but lovingly crafted and polished), “Speechless,” its new work, is a metaphor, an allegory, a tonic and an elixir. It is both deadly serious and playful, transcendent and mundane. We watch as the members of the acting company – Heidi Bakke, Holo Lue Choy, Steven Epp, Masanari Kawahara and Nathan Keepers – struggle, transform themselves and each other, wash dishes, peel potatoes and mop the floor.

“Speechless” is 75 minutes of no talking. No words. When was the last time we experienced that? We spend most of our waking hours buried in words, and words follow us into our dreams. The wordlessness of “Speechless” concentrates our attention on the gestures and expressions of the actors. We’re free to study faces crumbling in grief; the long, graceful line of a back; dances with napkins and chairs; looks of consternation; tender, comforting embraces; and bits of theatrical legerdemain. In one scene (if there are scenes), thin, steadily falling streams of water are passed from hand to hand.

You may or may not perceive a story, a narrative. It doesn’t really matter. There are ashes at the beginning and ashes at the end. The soundtrack is mostly sad and stately music by Brahms, Schubert, Tchaikovsky, Elgar and Korngold. If we described in words what happened, in a line from start to finish, it wouldn’t make much sense and would spoil the surprise of the experience. There are moments of humor and delight, and Pieta-like beauty that brought gasps from the audience. When it was over, we were all a little stunned. Days later, that feeling lingers.

Overheard as the applause faded and people started leaving their seats: “Amazing.” “Cathartic.” “I needed that.” “The most brilliant thing I’ve ever seen.” “The best ever celebration of life.” Add “ravishing” and “radiantly hopeful.”

Conceived by Epp, Keepers and Dominique Serrand, created by the company and directed by Serrand, with set design by Serrand, costumes by Sonya Berlovitz, lighting by Marcus Dilliard and sound by Justin Burk, “Speechless” is at the Lab Theater through Nov. 4. FMI and tickets ($20-32); 612-333-7977.

Tonight (Tuesday, Oct. 17) at Open Book: Book launch: Alison McGhee’s “Never Coming Back.” Winner of four Minnesota Book Awards, the Geisel medal and more, Alison McGhee will read from her new novel about a young woman’s return to her rural Adirondacks home to care for her increasingly forgetful mother. Her previous books include “Shadow Baby” and “Someday.” 7 p.m. Can’t make it tonight? She’ll be at Magers & Quinn on Tuesday, Nov. 7 at 7 p.m. 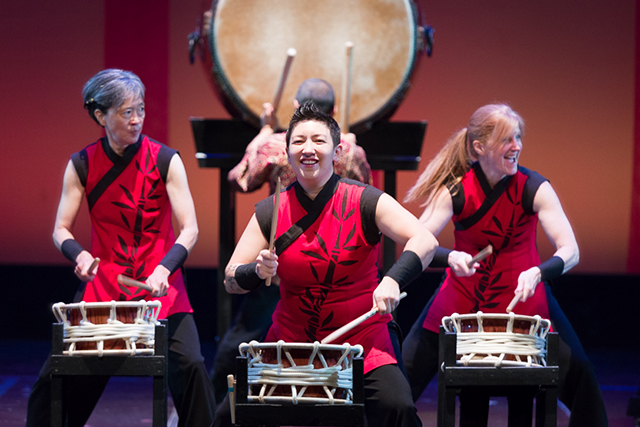 Courtesy of TaikoArts Midwest
Members of the Ensō Daiko ensemble, which will perform tonight at the North Garden Theater.

Tonight at the North Garden Theater: Taiko Tuesday. To spread the news (and the noise) about taiko drumming – athletic, energetic, fierce and loud – TaikoArts Midwest is holding a series of free monthly concerts by its resident ensemble, Ensō Daiko (formerly Mu Daiko). This month’s guest is Portland, Oregon-based Eien Hunter-Ishikawa, a member of the On Ensemble. Come for the drumming and check out the newly renovated theater – formerly the old Garden Theater – on 7th St. West in St. Paul. 7 p.m. Free. Mark your calendars for the next two concerts in this Knight Arts Challenge-winning series: Nov. 21 and Dec. 5, both at Gremlin Theater.

Wednesday at the Aster Café River Room: “The Sioux Chef’s Indigenous Kitchen.” With all our emphasis on ethnic restaurants and cooking, most Minnesotans are totally unfamiliar with foods whose roots go deeper than even lefse and lutefisk: the modern indigenous cuisine of the Dakota and Minnesota territories. Sean Sherman and Beth Dooley – Sherman is the Oglala Lakota chef and founder of The Sioux Chef, Dooley is the author of many award-winning cookbooks – will present and sign copies of Sherman’s new book at this open house event. Samples made from recipes in the cookbook will be served. 6-9 p.m. Free, but RSVP here. On Saturday at Mill City Museum, Sherman will give 30-minute cooking demos at 12:30 and 2 p.m. FMI. Included with site admission ($12 adults).

Thursday at the Arlington Hills Community Center: “The Blood is at the Doorstep.” The annual Human Rights Film Series starts its 12th season with Erik Ljung’s documentary about the 2014 police killing in Milwaukee of Dontre Hamilton, an unarmed black man with paranoid schizophrenia. The film digs deep into the case and its aftermath, following Hamilton’s family and surrounding community for three years. Here’s the trailer. A discussion will follow the film. 6 p.m. Free and open to the public. The series is a program of the Friends of the Saint Paul Public Library and the Advocates for Human Rights. 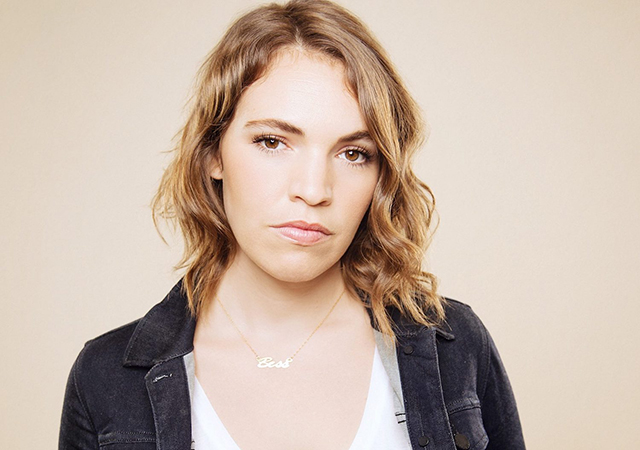 Photo by Mindy Tucker
L.A.-based Beth Stelling will be performing at the 10,000 Laughs Comedy Festival.

Thursday through Saturday: 10,000 Laughs Comedy Festival. Three days of indie comedy in six venues, with 13 shows featuring 60 comics from all over the country, including national headliners and total unknowns. This ambitious annual laugh-a-thon is now in its 7th year, which is saying something. The 2017 headliners are New York-based Shane Torres (“Conan,” Comedy Central), L.A.-based Beth Stelling (named a Comic to Watch by Time Out in 2016), and Dan St. Germain (“Jimmy Fallon,” “Conan,” a half-hour special on Comedy Central). FMI and tickets ($8-16).