The two plays couldn’t be more different. Shakespeare’s 400-year-old tragedy “Romeo and Juliet,” directed by Joseph Haj, on the Guthrie’s thrust stage, with a cast of 15 and a magnificent set on a turntable that reveals different scenes: the streets of Verona, a monastery, Juliet’s bedroom, her balcony. And Alice Birch’s new play “Revolt. She Said. Revolt Again,” directed by Frank Theatre’s Wendy Knox at the Gremlin, with a cast of six and various objects – pots and pans, bras, dolls, shoes – hanging from the ceiling.

About all they have in common is Shakespeare’s name. “Revolt” was commissioned by the Royal Shakespeare Company and first performed in Stratford-upon-Avon in June 2014. Yet they’re playing simultaneously in our own Twin Cities, which are so filled with good theater this fall we’re about to burst.

“Romeo and Juliet” is enthralling. Some have opined that the color palette – mostly black, brown and gray, with rare touches of red – gets monotonous, but when light hits the two lovers, dressed in white, they glow like ethereal creatures. From Kate Eastman and Ryan-James Hatanaka, Haj evokes a very youthful pair of star-crossed lovers; in the play, Juliet is not yet 16, and Eastman is a total teenager: passionate, impulsive, erupting in frustrated squeals. Hatanaka is a dashing Romeo whose adolescent crush on the fair Rosaline turns to love for Juliet at first glance. There’s real chemistry between the two, which is key to the whole thing as they spiral toward their doom. The famous balcony scene, which can get overly sweet, has touches of humor as Romeo tries and fails to scale the wall up to Juliet’s room. A few moments later, she shows him how it’s done.

Haj has cast Mercutio as a woman; all abs and tatts, Kelsey Didion nails the character’s labyrinthine wordplay. Other standouts in the cast are Stan Demidoff as a menacing Tybalt, Shá Cage as a regal Lady Capulet, Candace Barrett Birk as a chatterbox Nurse, and James A. Williams, whose Friar Lawrence exudes authority, even as he admits his part in the tragic events. Victor Zupanc’s score and Jennifer Moeller’s costumes give the production a modern feel, complete with heavy metal music during fight scenes. Scenic designer Anna Louizos took advantage of the turntable to create impressive sets that make sense. The turntable can be a showy distraction, but it isn’t here.

Lovely to look at, achingly sad, and never slow (at 2 hours and 35 minutes, including one intermission), “Romeo and Juliet” is a winner. 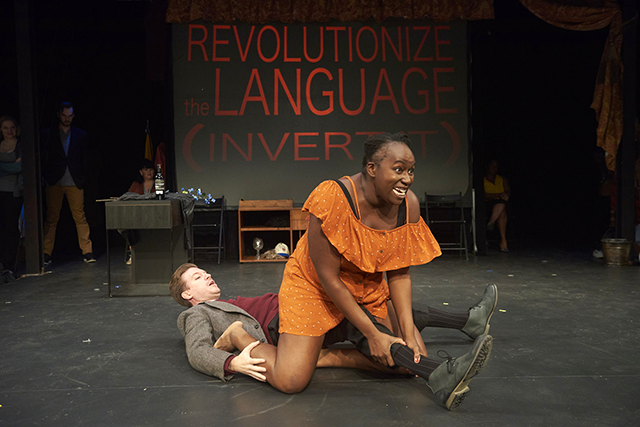 Photo by Tony Nelson
Grant Henderson and Joy Dolo in a scene from “Revolt. She Said. Revolt Again.” at the Gremlin.

We’re trying not to think of Harvey Weinstein as we look back on “Revolt. She Said. Revolt Again.” Or Bill O’Reilly. Or that leaked “Access Hollywood” tape. “Revolt” will bring back memories of dumb, demeaning things men have said and done, because we all know men who have said and done them. Alice Birch’s play, staged by Frank Theatre in Gremlin Theatre’s new space, is shocking, hilarious and infuriating. Why, in 2017, is sexism still even a topic?

“Revolt” is not a play in the more usual linear sense. It’s a series of six scenes where the actors portray different characters in different circumstances, with no overlap except for a few repeated words dropped like crumbs along the way: bluebells, watermelon, potatoes.

In “Revolutionize Language (Invert It),” a man (Grant Henderson) and a woman (Joy Dolo) do a bitter mating dance. (The characters are not given names.) He praises her, flatters her, and tries to seduce her; she turns the tables, leaving him a confused and muddled mess. In “Revolutionize the World (Do Not Marry),” a man (Gabriel Murphy) assumes that a diamond engagement ring will seal the deal with the woman he loves (Emily Grodzik). He couldn’t be more wrong. To her, marriage is a suicide bomb.

Anyone who has had a job will relate to “Revolutionize Work (Engage with It).” A woman (Charla Marie Bailey) wants Mondays off. She wants to work less, sleep more, walk her dog. Her boss (Henderson) offers her everything except what she asks for, growing increasingly enraged when she sticks to her original request. Maybe – for all of us – vending machines and dogs in the office and a gym in the basement aren’t substitutes for spending less time at work. He eventually asks, “Do you want to be paid as much as the boys?” Nope, not even that.

“Revolutionize the Body (Make It Sexually Available Always)” takes place in a grocery store, “Revolutionize the World (Don’t Reproduce)” at a meal between three generations of women. In the final scene, “Revolutionize the World: Galvanize,” all heck breaks loose. A woman (Jane Froiland) says, “I thought I had been living under the principle of kindness and hope being enough. … The thought hasn’t been enough.” The play is a high-speed rat-a-tat of language, with tight timing and physicality that doesn’t look controlled but must be, or someone would get hurt. In 80 minutes, with no intermission, it’s over, and you stumble out wondering, “What just happened?” Now that’s a night at the theater.

Tonight (Tuesday, Oct. 10) at the University Club of St. Paul: Amy and Dave Freeman read from “A Year in the Wilderness: Bearing Witness in the Boundary Waters.” National Geographic’s 2014 Adventurers of the Year, the Freemans will read from their beautiful new book, which chronicles the 366 days they spent in the BWCA after learning of toxic mining proposed within its watershed. Published by Milkweed in September, it’s a compelling argument and plea to protect our fragile natural treasure. Here’s the trailer. Ben Weaver will play a few songs and join the Freemans for conversation. 7 p.m. FMI. Free and open to the public.

Tonight at Northrop: Malpaso Dance Company with Zenon Dance Company. The 2017-18 Northrop Dance Season opens with a double header (baseball pun intended). The Havana-based Malpaso will make its Minnesota debut, with our own Minneapolis-based Zenon as special guest. For his McKnight International Choreographer residency in 2014, Malpaso’s artistic director, Osnel Delgado, created a baseball-themed piece, “Coming Home,” for Zenon. Now we get the chance to see his company, known for its “fluid, sexy athleticism.” The program will include works by Delgado, Aszure Barton and Ronald K. Brown; Delgado will dance. 7:30 p.m. FMI and tickets ($26-46; $30 under 30); 612-624-2345.

Tonight (Tuesday, Oct. 10) and Wednesday at the Dakota: The Corea/Gadd Band. Legendary pianist, multiple Grammy winner and NEA Jazz Master Chick Corea is always on tour, always forming new bands, always reinventing himself. This time, he’s back with the great Steve Gadd, the first electric Return to Forever drummer and another music legend (“50 Ways to Leave Your Lover,” Steely Dan’s “Aja”). Rounding out the stellar ensemble are Benin-born guitarist Lionel Loueke on guitar, Steve Wilson on saxophone, Carlitos Del Puerto on bass and Luisito Quintero on percussion. 7 and 9 p.m. FMI and tickets ($65-100); 612-339-5299.

Wednesday at Macalester’s Mairs Concert Hall: Undaunted Exploration: NASA’s New Horizons Mission to Pluto with Richard Binzel. Pluto was still a planet when “New Horizons” was launched into space. Binzel did his first research on Pluto as a Macalester student working as a summer intern at the U.S. Naval Observatory in Washington, D.C. Now an MIT professor and member of the NASA mission team, Binzel will talk about the latest discoveries and the decades-long effort to explore the farthest reaches of the solar system. 7 p.m. in the Janet Wallace Fine Arts Center, 130 S. Macalester St., St. Paul. Free.

Thursday at the Fitzgerald: The Splendid Table Live: Lynne’s Goodbye. In February, Lynne Rossetto Kasper, co-founder and longtime host (since 1994!) of public radio’s “The Splendid Table,” announced that she would retire at the end of 2017 and that New York Times columnist Francis Lam would take over. Lam has been hosting since March 10, with Lynne contributing. This night of conversation, music and stories will be recorded to air later in December as Kasper’s final show for broadcast. 7 p.m. FMI and tickets ($22-49); 612-290-1200. 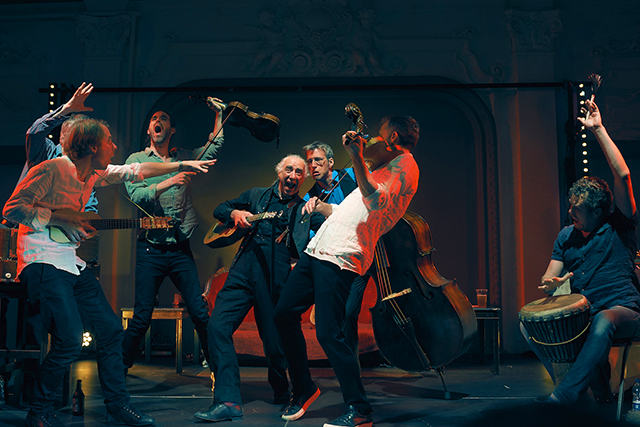 Thursday at Aria: “The Alehouse Sessions.” Schubert Club Mix kicks off its fifth season with a high-energy night of music by the Norwegian ensemble Barokksolistene, whose specialty is early music on period instruments. They’ll play Purcell overtures, English sea shanties and Scandinavian folk songs, which might sound stuffy and old-fashioned, but don’t worry. Schubert Club Artistic and Executive Director Barry Kempton told us back in May, “It’s more like a jam session in a pub than a formal early music program. Much less reverential.” Here’s a video. This will the first time Barokksolistene has played the Twin Cities. 7:30 p.m. FMI and tickets ($30); 651-292-3268.