On the last Wednesday in September, the Soap Factory, a venerable nonprofit arts center in a 130-year-old, 52,000-square-foot historic warehouse near the Minneapolis riverfront, had a symbolic groundbreaking for a complete renovation. The $6.2 million redo – financed by historic tax credits, the New Markets Tax Credit Program, donations and a mortgage – will include residency studios, refurbished galleries, two floors of artist studios and a restaurant facing the river.

Just two years ago, a lot of people (including this writer) thought the Soap might be a goner. Its longtime executive director, Ben Heywood, had left rather suddenly for another position. A big grant from the Andy Warhol Foundation went away. Recent renovations had led to budgeting issues. In November 2015, the Soap announced it would put its staff on part-time and close its doors at the end of December. Two board members quit and the position of associate director was terminated. The neighborhood was rapidly gentrifying, and the Soap seemed ripe for redevelopment into offices, an entertainment center or pricey condos.

What happened at the Soap between then and now? That’s a question with extra resonance in light of recent news from Intermedia Arts, another venerable nonprofit arts center that owns its building, which last week laid off its entire staff and is now “evaluating options to preserve the mission of the organization.”

We asked Bill Mague, the Soap’s executive director, for insights. Mague joined the Soap’s board in 2014, bringing more than 25 years of experience in real estate finance, development and strategic management, including 11 years as a vice president for Artspace. He became ED in April 2016.

“After Ben’s departure [Mague calls this a ‘cathartic moment’], the board hired an interim executive director, David Fey. He put together information in a clear way for the board, in particular for me and one other member with a background in financials, so we could get a handle on what was going on.

“Prior to Ben’s departure, I had been leading a process of interviewing potential developers and vetting a potential development scenario. That was moving along just fine, and it all sort of stopped when Ben departed. David Fey did a very good job of helping get the house in order, but the board itself had to form the message, and it was difficult to do, so we decided that the message at the moment needed to be that we were going to go dark for the winter, which was not unheard of.

“The messaging was terrible. Twitter and Facebook went bananas. Everybody thought the devil incarnate was coming and the building would be sold and condominiumized. That whole narrative was picked up by MPR and City Pages.

“That put us in a position of saying, ‘Anybody and everybody who has a question, here are two days when the board will be at the Soap Factory. You can arrive at any time. We’ll be here to answer every question in an orderly fashion, but we want to make sure that we are clear what the facts are, and we need to know what you, the community out there, wants for the Soap Factory. The first fact is: We do own the building. Let’s be clear.

“There was some very visceral conversation about whether [the Soap] was the artists or the building. It was fascinating to watch that take place. Everybody was wrestling with that challenge. And we realized – it doesn’t have to be either/or. It really is both together. This place is important, and we increasingly know that. We began to turn the corner on ‘OK, how are we going to move through this?’

“The fall meeting was attended by roughly 150 people. It included our foundation program officers, our councilmember [Jacob Frey], our lender, and 100-plus artists and folks who had been part of the Soap for a long time. Out of that, we asked 30 artists to help us synthesize a transitional strategic plan. These were artists who had shown at the Soap Factory, were established in their practices, and were some of the alumni that cut their teeth in the Soap in the mid-’90s.

“The outcome of that exercise was two things that were very clear: We would remain a place for emerging artists and experimental place-based art activities. And – this is the critical one – we would expand our capacity to serve artists while leveraging the capacity of our building. This was a way to say, ‘It’s not either/or, it’s both.’

“Rather than going small and trying to stay in our footprint of the 15,000 square feet of the first floor and let the rest go for some other commercial purpose, we – at the advice of many, and after some fairly substantial discussions – decided to go big. We would make the most of the equity we have in the building, and the equity we have in the community of artists who came together, spent time going through the process and came out with a plan we could rally around.” 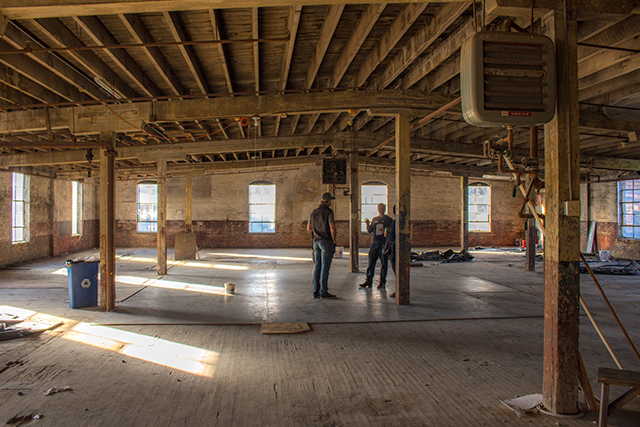 To stay engaged with artists and in the public eye during the transition, the Soap launched the 3X5 Emerging Artist Residency Program; Here & There, which placed art by Soap Factory artists around the exterior of the building and throughout the state; and an international exchange with a cultural organization in Sweden. Four Minnesota-based artists will spend a month there; four Swedish artists will come to the Soap in 2018.

We asked Mague to summarize the story of the Soap’s transformation during the past two years.

“I guess I would say that the building is a beautiful albatross. The albatross became a  greater and greater weight on the organization. The departure of the longtime executive director could have had the organization go one of two directions very easily. The depth and breadth and moxie of our arts community really supported this evolution. We came out of a cathartic moment with an immense amount of strength in the arts community and a laser-like focus on artists in residence. And that’s where we’re going.”

Later this month, as part of Here & There, a large-scale neon sign by artist Monica Sheets saying “Collectively We Support Your Autonomy” will be installed on the Soap’s roof. An opening reception is scheduled for Oct. 15 from 7-10 p.m. The sign will stay up for a year.

Tonight (Friday, Oct. 6) at Augsburg: Rayuela Music Festival: Immigrants’ Journeys. Rayuela is a brand new festival of Latin American chamber music. Its debut concert features the premiere of Reinaldo Moya’s “The Way North,” a work for solo piano (Matthew McRight) that portrays the journey of a Central American migrant through Mexico to the United States. It also includes readings and performances by Augburg theater students. At Sateren Hall. 7 p.m. Free. The festival continues Sunday at 3 p.m. with a program of works by Latin American composers. 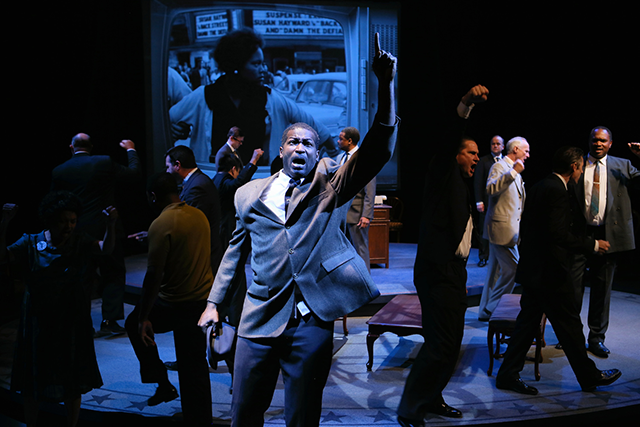 Photo by Scott Pakudaitis
Ron Collier as Freedom Summer activist David Dennis in the History Theatre production of “All the Way.”

Opens Saturday at the History Theatre: “All the Way.” The regional premiere of Pulitzer Prize winner Robert Schenkkan’s play about LBJ’s first year as president. In 1964, as Johnson looks forward to an election, he also works for the passage of the Civil Rights legislation that has languished in Congress. This play won the 2014 Tony Award for Best Play. Ron Peluso directs, with Pearce Bunting as LBJ and Shawn Hamilton as Martin Luther King Jr. 7:30 p.m. FMI and tickets ($25-52). Ends Oct. 29.

Sunday at Macalester’s Mairs Concert Hall: Zlata Chochieva. The Frederic Chopin Society begins its 35th season with a Moscow-born pianist trained in the old-school Russian tradition. Her 2014 “Chopin: Complete Etudes” recording was included in Gramophone’s list of 50 greatest Chopin recordings. Her program at the lovely, HGA-designed Mairs will include Chopin’s Trois Nouvelles Etudes and 12 Etudes, Op. 25, Rachmaninoff’s Variations on a Theme of Chopin and Bach-Rachmaninoff’s Suite from Violin Partita, transcribed for piano. 3 p.m. FMI and tickets ($30). 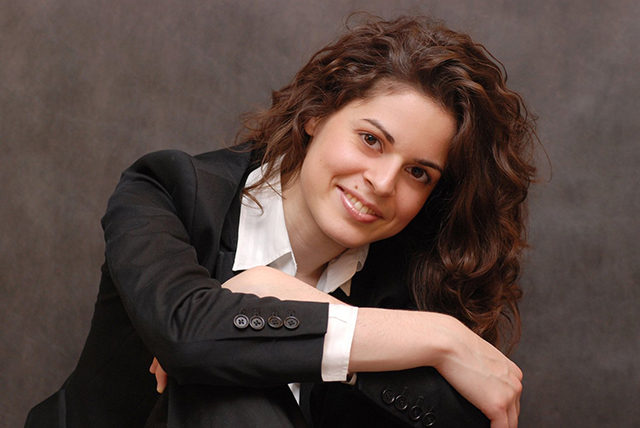 Sunday at Crooners: Katie Thiroux CD release. She sings, she scats, she plays the upright bass, and she composes. The New Yorker called her a “first rate bassist and beguiling vocalist,” she just spent the summer at Quincy Jones’ new club in Dubai, and she’s currently on a 16-city national tour for her sophomore CD, “Off Beat.” The intimate Dunsmore listening room at Crooners will be an ideal place to check out this rising young musician. With pianist Steve Feifke and drummer Matt Witek. 7:30 p.m. FMI and tickets ($25).

The Soap Factory’s recent evolution; ‘All the Way’ to open at History Theatre