Sen. Al Franken will spend a big chunk of Saturday at the Twin Cities Book Festival, a giant of a literary gathering. He’ll attend the Morning Mingle for local authors starting at 10 a.m., then present “Al Franken, Giant of the Senate,” at 12:30 p.m. Franken’s new book is a #1 New York Times best-seller. The New Republic called it “the best political book of 2017.” Here’s a trailer – Franken through and through.

Held each year by Rain Taxi, the Book Festival is a jam-packed, day-long event at the Fine Arts Center on the Minnesota State Fairgrounds that starts the night before with a reception and opening night talk. (The reception is ticketed; the talk is free.) This year’s talk features the new anthology, “Tales of Two Americas Stories of Inequality in a Divided Nation,” with editor John Freeman and two contributors – poet Lawrence Joseph and fiction writer Claire Vaye Watkins – in conversation. Couldn’t be timelier.

The Southern looks ahead to 2018 season

The Southern Theater announced its 2018 season in late September, and on Monday evening, five artistic companies gave us glimpses into what they will bring to the stage beneath the stone arch.

Katie Kimball did an elegant dance on a trapeze for SunsetGun Productions and Twin Cities Trapeze Center. For The Catalysts, cancer survivor Max Wojtanowicz revisited his Fringe hit “Ball: A Musical Tribute to My Lost Testicle.” Sumunar Indonesian Music and Dance dazzled with music and movement. Daara Dance Company performed a complex, energetic selection from “The Journey of Dust,” a work by founder and artistic director Michel Kouakou. And dancer/choreographer Vie Boheme was as riveting at the Southern as she was in the New Griots Festival at the Guthrie in July.

From January to December, 26 companies will present dance, theater, film, performance art, music and more at the Southern. New this year, applications were curated by a panel of four artistic directors: performer, writer, filmmaker and curator Shá Cage; theater maker, director and educator Jon Ferguson; musician, performer and spoken word artist Joe Horton; and dancer/choreographer Kaleena Miller. A group of community members was invited to review and score the applications, based on their interest and relevance to the community, including the West Bank neighborhood. 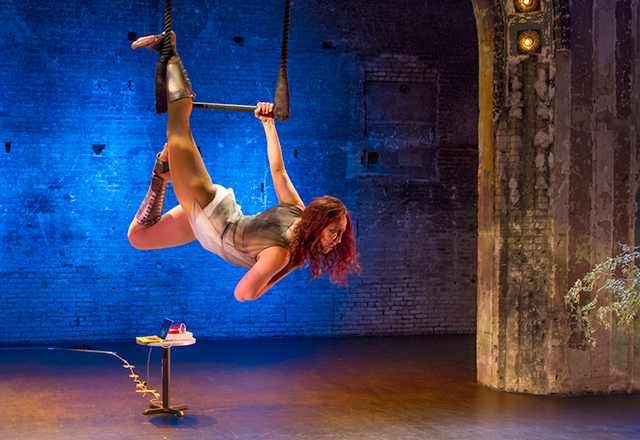 MinnPost photo by John Whiting
Katie Kimball performing an elegant dance on a trapeze for SunsetGun Productions and the Twin Cities Trapeze Center.

The ARTshare program will continue. For $18/month, members can see as many shows as they want. Single tickets will go on sale later this year.

Looking back, briefly: The Southern, a gem of a historic theater that opened its doors in 1920, almost went under in 2011 during a financial crisis. Damon Runnals stayed on as the only staff member and ran the Southern as a rental facility. He cleaned up much of the financial mess and came up with ARTshare, which began in January 2015. Runnals stepped down in late 2016, and Jamie Schumacher moved up from development director to interim executive director. The Southern is looking to hire an executive director.

Thursday and Friday at the Walker: Salva Sanchis and Anne Teresa De Keersmaeker / Rosas “A Love Supreme.” John Coltrane’s musical masterpiece intertwines faith, art, and spiritual ecstasy. Many artists have found inspiration in this powerful work and have taken it on. (One of our all-time favorite Walker concerts was the Campbell Brothers’ sacred steel performance on slide guitars in Feb. 2015.) We can’t wait to see what Belgian dance master De Keersmaeker and Spanish-born choreographer Sanchis have done with it. Each of the four male dancers represents a musical instrument in saxophonist Coltrane’s original quartet with pianist McCoy Tyner, bassist Jimmy Garrison and drummer Elvin Jones. 8 p.m. FMI and tickets ($25/20 Walker members). 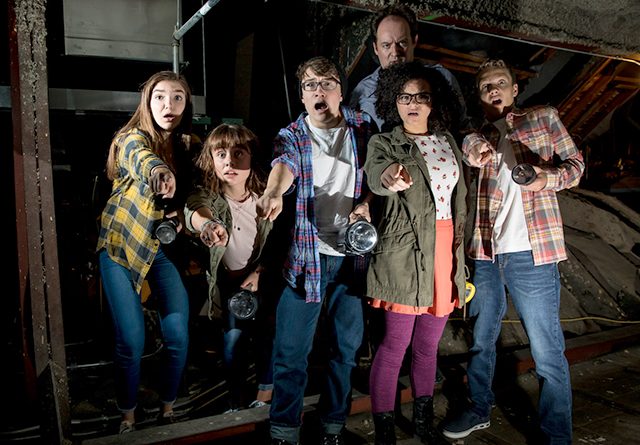 Opens Friday at Steppingstone Theatre: “Goosebumps the Musical: Phantom of the Auditorium.” The “Goosebumps” series by R.L. Stine has sold more than 400 million copies, so chances are the kids you know are familiar with it. Dane Stauffer directs a cast of young actors in an only slightly spooky tale of Brooke and Zeke, who are excited to star in their school’s next musical – until mysterious events start happening in the theater. The musical had its world premiere in Oregon just last year, so it’s almost brand new. 90 minutes with one intermission. Grades 2 and up. 7 p.m. FMI and tickets ($12/$16; pay-as-able on Oct. 15). Through Oct. 29, with many matinees.

Friday at the Trylon-no-longer-micro-Cinema: Friday the 13th All-Night Marathon. The new Trylon holds twice as many people as the old, for twice as many screams. Starting Friday at 6 p.m., ending Saturday at 8 a.m., you can see the first eight Friday the 13th films. Fourteen hours, with intermissions. Doomed, you’re all doomed! Ari Lehman, the “first Jason,” will stop by courtesy of the Twin Cities Zombie Film Crawl. 6 p.m.-8 a.m. FMI, trailers and tickets ($40).

Sunday at the Dakota: Joey Alexander Trio. Now 14 years old, Bali-born Alexander made his U.S. debut with the Jazz at Lincoln Center Orchestra led by Wynton Marsalis, where his solo version of Thelonious Monk’s “’Round Midnight” blew people away. He has since released two chart-topping albums, earned three Grammy nods, been profiled for “60 Minutes” and performed at the Obama White House, clubs and festivals including the 2016 Twin Cities Jazz Festival. He’s touring behind his third album, “Joey. Monk. Live!” and that’s what he’ll play at the Dakota. Joey’s just a kid, but he plays like an old jazz soul. 6 and 8 p.m. FMI and tickets ($35-50); 612-332-5299.