When Joseph Haj was named artistic director of the Guthrie Theater in 2015, succeeding Joe Dowling, who had held that position for 20 years, we knew change was gonna come. The son of Palestinian immigrants, Haj is one of the few Arab-American artistic directors in the U.S. He is committed to equity, diversity and inclusion, and to ramping up the Guthrie’s community engagement.

In 2016, the Guthrie received a $1 million, three-year Mellon Foundation grant to support something called the Level Nine Initiative: treating the small Dowling Studio on the Guthrie’s ninth floor as a community space, growing the programing and lowering ticket prices to $9 for all performances there. In 2017, Haj and Michelle Hensley’s Ten Thousand Things Theater were named co-recipients of the prestigious Rosetta LeNoire Award, which recognizes theaters for diverse and inclusive casting.

Part of the 2015-16 season had already been programed by Dowling when Haj arrived. The 2016-17 season was the first to be fully curated by Haj. News of the season that ended Aug. 31 was reported at the Guthrie’s annual meeting on Monday.

The budget was balanced, with an operating surplus of $19,029 on $28 million. The number of season ticket holders grew to 19,623, the highest number in five years. Individual donors grew by 16 percent. The debt on the theater’s home on the river dropped from $14 million  to $6.5 million. The theater invested nearly $1 million in maintenance and equipment.

Programing expanded to 28 productions and 655 performances across three stages. Three new works by nationally known playwrights were produced on Level Nine, and six outside companies presented their work. More than 100 audience engagement events took place there, led by the new director of community engagement, Carra Martinez. Four community gatherings called “Happenings” took place, one a response to Charlottesville, another highlighting the relationship between Native communities and water rights.

The Guthrie’s offices, stages and backstages became markedly more diverse. From FY15 to FY17, 28 percent of the full-time staff hires were people of color. The number of actors of color more than doubled, from 15 percent to 37 percent. Creative teams went from 11 percent artists of color to 36 percent. The number of female collaborators jumped from 17 percent to 39 percent.

Total attendance dropped from 380,108 to 368,292. Twenty-three percent of tickets went to students, teachers and other community members free of charge or for less than $10 per ticket, on average.

“A Christmas Carol” continues on the thrust stage through Dec. 30, “Blithe Spirit” (with Sally Wingert) on the proscenium through Jan. 14. The next scheduled performance in the Dowling Studios is a Solo Emerging Artist Celebration that starts Feb. 24 with Antonio Duke, A.P. Looze and Ifrah Mansour.

The Commonweal Theatre’s 30th season will include six plays over five months, all in its intimate space in scenic Lanesboro. Earlier this year, the Commonweal won a 2017 Minnesota Nonprofit Award for Excellence from the Minnesota Council of Nonprofits – the first professional theater company ever to receive this distinction.

April 5-June 23, 2018: “Silent Sky” by Lauren Gunderson. The true story of Henrietta Leavitt, a pioneering astronomer who made many important discoveries in an age when women couldn’t vote. Gunderson, the most-produced playwright in the country, also wrote “Miss Bennet: Christmas at Pemberley,” now at the Jungle.

May 4-Sept. 24: “The 25th Annual Putnam County Spelling Bee” by William Finn, Rachel Sheinkin and Rebecca Feldman. As sixth-graders battle for the championship, they reveal their passions, fears and dreams through songs. Alan Bailey will direct the Tony Award-winning musical.

June 28-Oct. 22: “The Clean House” by Sarah Ruhl. A romantic comedy about a cleaning woman who would rather be a comedian, Ruhl’s play was a finalist for the 2005 Pulitzer Prize.

Nov. 16- Dec. 22: “It’s a Wonderful Life: A Live Radio Play” by Joe Landry. The beloved tale of George Bailey and Bedford Falls, staged as a 1940s radio broadcast, with five actors voicing all of the town’s residents and sound effects created live onstage.

Season passes are available now. You don’t need to commit to specific dates in advance.

Thursday at the Red Eye Theater: “Hatchet Lady.” The story of Carrie Nation, hatchet-wielding prohibitionist, told as a feminist punk-rock musical. The timing couldn’t be better. Commissioned by Walking Shadow, written by Savannah Reich, directed by John Heimbuch, with music by Luc Parker, a four-woman cast and a live four-woman band, The Hatchetations. Lovell lives and works in Philadelphia but was born and raised in Powderhorn Park. 7:30 p.m. FMI and tickets. Closes Saturday, Dec. 16. 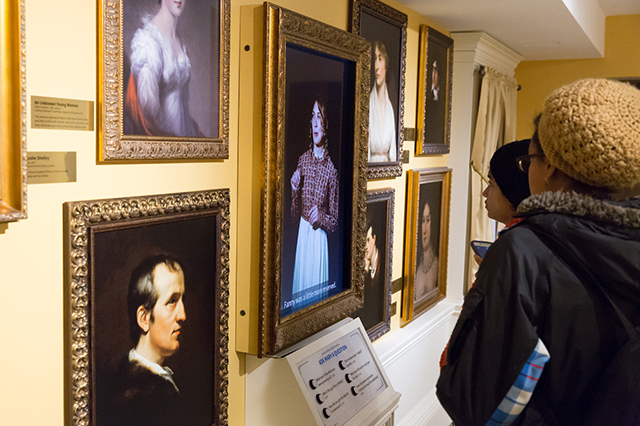 Thursday at the Bakken Museum: “Mother of the Monster: An Evening With Charlotte Gordon.” Gordon is the author of “Romantic Outlaws: The Extraordinary Lives of Mary Wollstonecraft and Mary Shelley.” The mother was a prominent feminist; the daughter married poet Percy Bysshe Shelley and wrote “Frankenstein.” Doors at 5, lecture at 6, with first-come, first-served seating for 50 and limited standing room. Arrive early and take in the museum’s interactive exhibit, “Mary and Her Monster: Mary Shelley and the World That Created Frankenstein.” Free, and so is museum admission, since this falls outside normal museum hours.

Saturday and Sunday at Brickmania Toyworks: A LEGO Fan Expo. Founded by designer Daniel Siskind, based in northeast Minneapolis, Brickmania creates custom LEGO kits. They’re made from genuine LEGO parts, but the subjects aren’t part of the official product line. This show features several of the big displays Brickmania takes to museums – like a gigantic model of the USS Missouri – plus train club layouts, a LEGO Nye’s Polonaise and an entire LEGO city. FMI including a video, map and tickets ($8 online, $10 door). Saturdays and Sundays through Jan. 7. This will be the last Brickmania fan expo at the NE Minneapolis warehouse.

Now at the Brave New Workshop comedy theater: “The Polarizing Express: Dysfunction Junction.” The name is a mash-up of a children’s book by Chris Van Allsburg and an educational (but fun!) kids’ TV show “Schoolhouse Rock!” The show is an evening of nonstop jokes, skits, and laughter, and this year, BNW claims, it has more material than ever to draw upon. With Lauren Anderson, Denzel Belin, Heather Meyer, Ryan Nelson and Taj Ruler, directed by Caleb McEwen. FMI and tickets ($20-38); 612-332-6620. Nightly through Jan. 27. 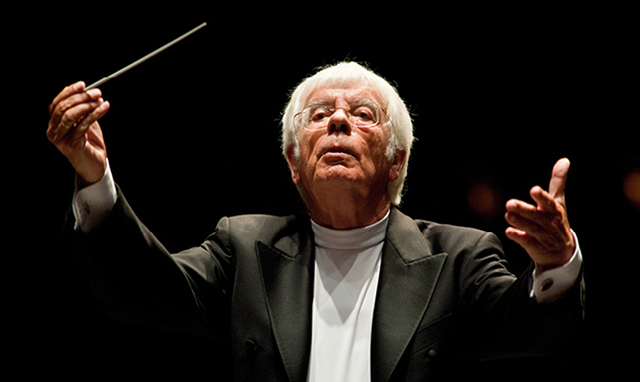 Photo by Jon Christopher Meyers
Helmuth Rilling will lead the orchestra, the Minnesota Chorale and soloists in performing Bach’s Christmas Oratorio Cantatas I, II and III.

Bach celebrated the holiday season with a festive Christmas Oratorio in six parts, spread out over six days. No one has time for that now – or wants to sit through the whole thing at once (over three hours) – so most performances these days include three or four of the six cantatas.