After a six-month commitment that turned into four years, Minnesota Orchestra President and CEO Kevin Smith will retire … again. Smith made the announcement at the orchestra’s annual meeting last week, which was full of otherwise good news.

For the third consecutive year, the orchestra balanced its budget, with a surplus of $79,000 on a $32.6 million budget. Assets are up, fundraising and rental income for the Hall are up, debt is down. The 2016-17 season was full of highlights: performances by Joshua Bell and Yo-Yo Ma, the release of two highly praised recordings, one featuring Sibelius’s “Kullervo” and the other Mahler’s Fifth (a 2018 Grammy nominee); a new recording of Mahler’s Sixth; a performance for 66,000 fans at a Vikings game; a record-breaking Symphony Ball; a Florida tour; a Young People’s Concert webcast that reached audiences in 22 countries; and free outdoor concerts that drew thousands.

Smith came out of retirement in 2014 to lead the bruised and battered orchestra following a lockout that lasted 16 long months. He became interim president and CEO in August 2014, then accepted a multiyear contract in November that ends on August 2018, the end of the 2017-18 season. “At that time, I will head back into retirement,” Smith said during the meeting. “I will do so feeling extremely confident about where the Minnesota Orchestra is headed.” A search for Smith’s successor has begun. 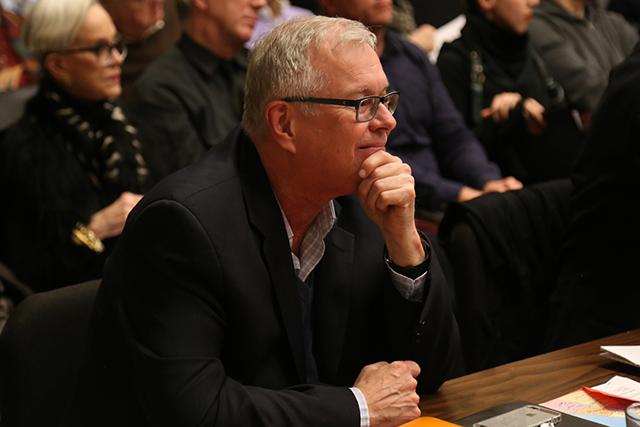 Photo by Lu Zang
Dale Johnson at the final orchestra workshop of “Dinner at Eight.”

At the Minnesota Opera, Dale Johnson will step out of his role as artistic director – a position he has held for more than 30 years – and into a new role as creative adviser to Ryan Taylor, the opera’s president and general director since May 2016. Starting in summer 2018, Johnson will advise the opera on the development of new work and the identification of promising new artists. The opera has no plans to replace Johnson and is not searching for a new artistic director. Instead, it will create a new artistic administration position.

In his career-long commitment to the opera, Johnson has supported the commissioning and world premieres of nearly 20 operas, led more than 150 productions and developed the careers of over 200 emerging artists. He has served as principal coach, chorus master, music administrator and artistic director. New operas have been created and careers have been launched by his two signature programs, the New Works Initiative and Resident Artist Program. Taylor, who was a member of the Resident Artist Program, sang roles in “Turandot,” “Street Scene,” “Il barbiere di Siviglia” and “Pagliacci/Carmina Burana” during the 2000-01 season, then returned to sing Sharpless in “Madame Butterfly” in 2004 .He said in a statement, “I credit Dale with helping to shape my artistic vision and love of opera as the pinnacle of musical storytelling.”

Johnson has plenty to do through the end of the opera’s current 55th anniversary season. He’s leading the production of “Fellow Travelers” at the Cowles Center in June, during Pride week. Several new works are in development, including a new opera about the 1919 White Sox scandal. And he’s working with Taylor and the opera’s leadership team to craft the 2018-19 and 2019-20 seasons.

Twin Cities Gay Men’s Chorus is searching for a new artistic director. Dr. Ben Riggs announced in October that after five seasons with the chorus, he and his husband, Rev. John Dwyer, would move to Berkeley, where Dwyer has accepted the position of COO at Church Divinity School. Riggs’s final concerts will be TCGMC’s “Gay Holiday Spectacular – Around the World!” on Dec. 8-10. 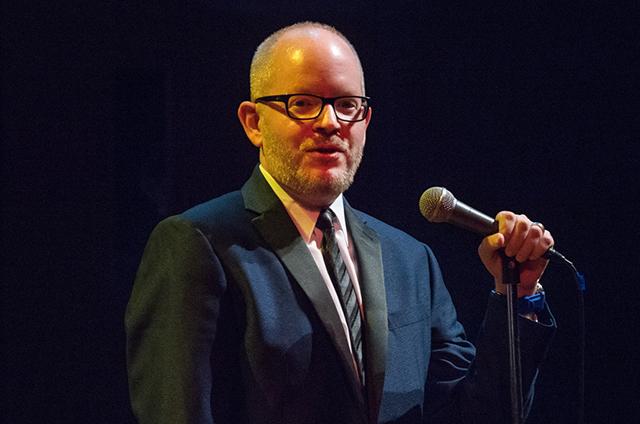 The remaining concerts in TCGMC’s 37th season will bear Riggs’s stamp. Spring’s “Rise Up!” will have a social justice theme and feature the local premiere of the controversial choral work “Seven Last Words of the Unarmed.” Summer’s “QUEEN” concert will be all about Queen. TCGMC’s next artistic director is expected to be in place by fall 2018.

Tonight (Tuesday, Dec. 5) at the American Swedish Institute: Nordic Table Featuring Richard Tellström: Folklore Traditions in Swedish Food. In June 2016, when ASI hosted celebrity Swedish chef Magnus Nilsson, he was accompanied by a small group of Swedish officials and scholars including Tellström, a food historian who penned the introduction to Nilsson’s epic “Nordic Cookbook.” We were so charmed by Tellström that we returned to ASI for a presentation by Tellström, during which we learned a lot, very painlessly. Tellström is currently in residence at ASI, hosting events like this one, where he’ll share stories, folklore, some Swedish oatmeal porridge and tips on how to meet a future spouse. 6:30 p.m. FMI and tickets ($15/$10 members).

Tonight at Plymouth Congregational Church: Jim Lenfestey reads from “A Marriage Book: 50 Years of Poems from a Marriage.” What does it mean to be married to the same person for half a century? How is it even possible? What keeps people together for a lifetime, in spite of everything? Minnesota Poet Laureate Joyce Sutphen has called Lenfestey’s latest book “a fine tribute to 50 years of real world love.” Milkweed Editions publisher Daniel Slager will introduce Lenfestey; Plymouth member and chef Beth Dooley will cater the post-reading reception. 7 p.m. Free.

Tonight and Wednesday at the U’s Rarig Center: “Godot Has Come.” No more waiting. This will be the U.S. premiere of a play by contemporary Japanese playwright Minoru Betsuyaku, in which Godot arrives, but Vladimir and Estragon are too preoccupied with their own lives to notice. The Tokyo-based Theatre Office Natori is touring the play, which will be here for two nights only, performed in Japanese with English supertitles. So far, it has toured in Paris, Berlin, Dublin, Moscow and Sibiu, a city in Transylvania. This could be a catch-it-or-regret-it-situation. In the Stoll Thrust Theatre. FMI and tickets ($17-7). 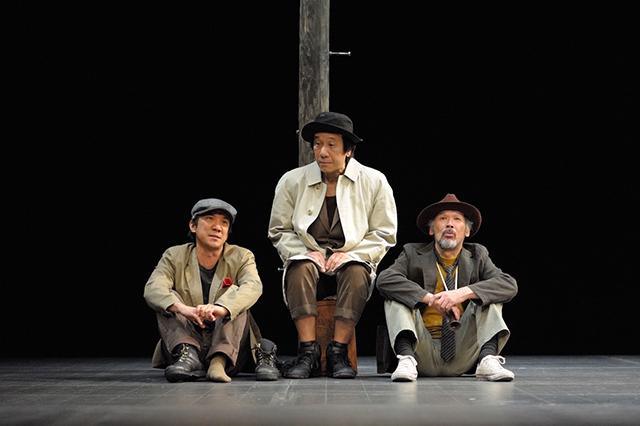 Courtesy of Theatre Office Natori
At the U: The U.S. premiere of “Godot Has Come.”

Wednesday in the Dunsmore Room at Crooners: Laura Caviani Trio “Confluences” CD release. Pianist and composer Caviani has been on fire this fall. In August she released “Mysterious Thelonious,” and now “Confluences,” an album of original music and arrangements. The centerpiece is a suite of songs inspired by Shakespeare’s “A Midsummer Night’s Dream.” They’re joined by “In the Moment,” which bursts out of the gate with joy; the mellifluous and flowing title track; the sassy, hard-swinging “Boogaloo for Mary Lou”; and an arrangement of “Somewhere Over the Rainbow” that brightens and lightens a tune we’ve heard to death. With Chris Bates on bass, Dave Schmalenberger on drums. 7:30 p.m. FMI and tickets ($15).

Wednesday and Thursday in the Ordway Concert Hall: Schubert Club International Artist Series: Eric Owens and Clara Osowski. Bass-baritone Owens gave up the oboe for a more secure line of work: opera singing. Even his speaking voice will give you chills; his laugh is a luscious rumble. Minnesota-based Osowski  is the mezzo everyone wants to hear. She recently won a big prize for the best interpretation of Schubert lieder; she and Owens will sing an all-Schubert program. 10:30 a.m. Wednesday, 7:30 p.m. Thursday. FMI and tickets ($24-66).

Singing, dancing and bloodshed! “A Very Die Hard Christmas” returns to the Bryant-Lake Bowl TheaterLead for its sixth year, which makes it a tradition as far as we’re concerned. (Plenty of holiday shows wish they lasted that long.) Presented by Mainly Me Productions and Dana’s Boys, this irreverent evening combines the action and suspense of “Die Hard” (you do know it’s a Christmas movie, right?) with the sentiment of actual Christmas specials. Starts this Friday, Dec. 8. 10 p.m. FMI and tickets ($15 advance, $18 day of show). Through Dec. 21.

Is “the most wonderful time of the year” not so wonderful for you? You’re not alone. On Wednesday, Dec. 20, Dissonance, an arts/mental health/recovery support organization, will host its second annual Unhappy Holidays event at the A-Mill Artist Lofts. Fun, lively and alcohol-free, it will be an evening of good food, good music, storytelling and community-building in a safe space. This year’s guests include singer-songwriter Charlie Parr, spoken word poet Saymoukda Vongsay, storyteller and podcaster Levi Weinhagen and more TBA. Free, but space is limited; register here. Doors at 6, program at 7.