Minneapolis is one of the most literary cities in America. Why shouldn’t we have our own annual book festival? Portland, Cincinnati, Baltimore and Ann Arbor do. And Chicago, Los Angeles and Washington, D.C. Book fairs are popular, inclusive, city-defining events.

That’s what Britt Udesen was thinking back in April 2015, when she started interviewing for the job of the Loft Literary Center’s executive director. “I thought this community was ready for a big event on a national scale,” Udesen said. “We kicked it around and talked about it. It’s been in our long-term goal since the day I moved in.”

Meanwhile, Stephanie Opitz moved back to Minneapolis, her hometown. She had been running the Texas Book Festival, and before then had been the fiction co-chair of the Brooklyn Book Festival and on the programs team for the PEN World Voices Festival. She knew her way around books and festivals.

Opitz is now the Loft’s festival director, and on May 11-12, 2019, the Loft will hold its inaugural Wordplay festival, “a book party in the heart of Minneapolis.” Announced Tuesday at a members’ event, Wordplay will take place in the Mill District, indoors and out: at Open Book (home to the Loft), Mill City Museum, the Commons park at the nearby U.S. Bank Stadium and other locations, all within walking distance of each other. The Loft hopes to bring in more than 100 authors – local, national and international – and draw a crowd of 10,000.

But wait: Don’t we already have a book festival? The Twin Cities Book Festival, held annually by Rain Taxi? That’s in the fall; Wordplay will be in the spring. That’s in St. Paul; Wordplay will be in Minneapolis. In a show of support, Rain Taxi editor Eric Lorberer was in the house when the Loft made its announcement. Udesen said, “We both believe this community has the capacity to support two major literary events a year.”

We’ll know the lineup of Wordplay authors in late 2018 or early 2019. (It depends on which authors will be touring during festival time.) Udesen and Opitz are both thinking big. Udesen hopes Michelle Obama will have written a book by then. For Opitz, “If Ina Garten wants to come, I’m on board with that.” Garten, aka the Barefoot Contessa, has a popular program on the Food Network and has authored many best-selling cookbooks. This will not be exclusively a literary festival. It will have something for anyone who loves to read, whatever they read.

Wordplay will offer a mix of book signings, gatherings large and small, activities, conversations, exhibitors and special events, some “ridiculous and silly.” Some will be ticketed; most will be free. Opitz promised “food trucks and actual parties.”

Community partners are signing up to help. An advisory board of authors is already in place that includes Lesley Nneka Arimah, Charles Baxter, Matt de la Peña, Louise Erdrich, David Mura, Celeste Ng and Danez Smith. Near the end of Tuesday’s event, Udesen stepped up to the mic to say, “We didn’t plan this, it just happened – we just got our first individual sponsor at the $50,000 level. An individual came forward with $50,000.” 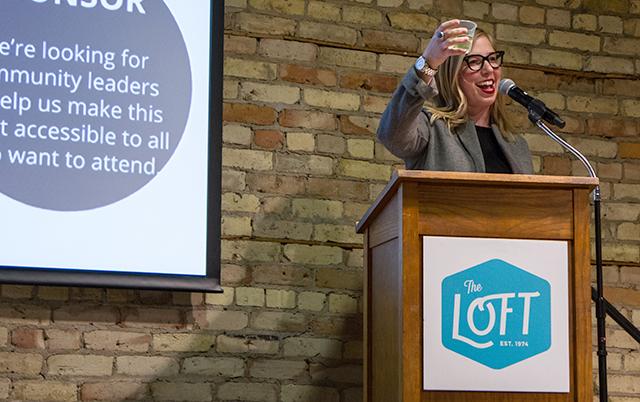 MinnPost photo by John Whiting
Loft Executive Director Britt Udesen: “I thought this community was ready for a big event on a national scale.”

The Loft has committed to three years and three festivals. “This is the most ambitious thing we’ve done, perhaps since our founding,” Udesen said. “We’ve continued to grow and evolve, but to take this big of a leap. … It’s growing our budget in a major way. We don’t expect to make a bunch of money off of this. We expect to break even.

“More nonprofits are thinking about how they serve their communities through events. An event gives more people access, and it serves people beyond those who already know they love you. It builds community and awareness. Also – and maybe this sounds a bit pie-in-the-sky – but at a time that seems especially fractured, we love the idea of bringing people together around storytelling.”

Tonight (Wednesday, Dec 13) at Hayden Heights Library: Two Buster Keaton silent films with music by Dreamland Faces. Most of us have seen a silent film or two with a canned score, or a silent film with solo piano accompaniment, usually music from the era when the movie was made. Dreamland Faces – musicians Karen Majewicz and Andy McCormick – write original scores for silent films, then perform them live at screenings. It’s a totally different experience, and brand-new. Hear what they have to say about “One Week” (Buster tries to build a house) and “My Wife’s Relations” (Buster marries the wrong woman). Presented by the Friends of the St. Paul Public Library. 7 p.m. Free.

Friday at Immanuel Lutheran Church in Eden Prairie: A Christmas Sing-Along. What could be sweeter than singing Christmas songs on a Friday night, in a church, with an orchestra and chorus? Santa might visit, and there will be fudge for sale in the lobby. The music includes selections from “The Nutcracker,” “Messiah” and Leroy Anderson’s “Christmas Festival.” Ho-Yin Kwok leads the Mississippi Valley Orchestra; William Mathis leads the Polaris Chorus. The sing-along arrangements are by former Minnesota Orchestra associate conductor (and Mississippi Valley Orchestra conductor emeritus) Henry Charles Smith. 7:30 p.m. Free; donations accepted. Also next Friday, Dec. 15, at Lake Harriet United Methodist Church in Minneapolis.

Friday at the Museum of Russian Art: Magnum Chorum in Concert. Christmas music you probably haven’t heard before, from Russia, Sweden and the Baltic region. Brian Schmidt will lead the 60-voice a capella choir Magna Chorum, founded in the choral tradition of St. Olaf College, in a program that includes Kopylov’s “Heavenly Light,” Alexander Levine’s “Hymn to the Lord” and “Hymn to the Virgin,” Chesnokov’s “Gabriel Appeared,” “Ave Maris Stella” by Polish composer Lukazewski, and a prayer of Mother Teresa. All in the lovely setting of TMORA’s main gallery. 7 p.m. FMI and tickets ($30; $25 members). Magnum Chorum also performs Saturday, Dec. 16, at Nativity of Our Lord Catholic Church and Sunday, Dec. 17, at Church of the Annunciation. FMI and tickets. 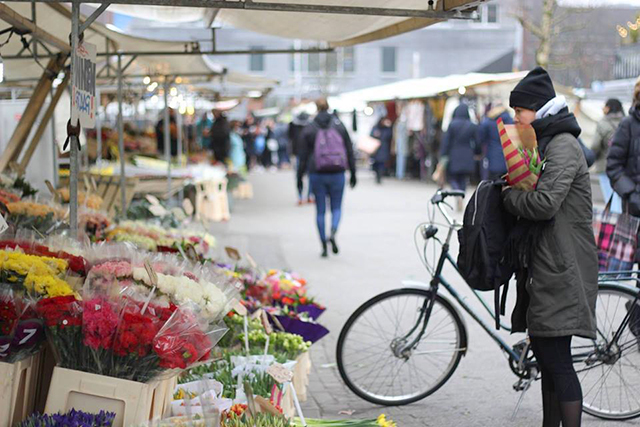 Courtesy of Our Streets Minneapolis
An Open Streets event will be held on Dec. 16.

Saturday: Winter Open Streets at Holidazzle. We’re getting Norther by the minute. The proof: An Open Streets event, for which the minimum expectations are usually 1) beer and 2) being able to walk around in one’s shirtsleeves, will be held on Dec. 16. Outdoors. Don’t be a baby; bundle up and head to downtown Minneapolis. (Get a free Metro Transit ride pass here.)  The one-mile route follows the newly reopened Nicollet Mall from 5th to Grant St., then heads west on Grant to Loring Park and Holidazzle. 11 a.m. – 5 p.m. FMI. Free. Got a bicycle? Join the Winter Slow Roll.

Saturday: Lowertown SantaCon X. It’s a pub crawl with Santas, the Brass Messengers and the Minnesota Krampus Society. No starting bar, no ending bar, no entrance fee, no wristbands and no merch. Come as Santa, Rudolph, an elf (please, not on the shelf) or yourself. The Santacon Express starts at 7 p.m. at Big River Pizza (Wall and E. 5th streets, moves to Kelly’s Depot Bar (Kellogg & Wacouta) at 9 p.m., then heads to the Biergarten Germania (Wall between E. 4th and E. 5th) from 11 until bar closing. FMI. Find the latest on the Facebook page. 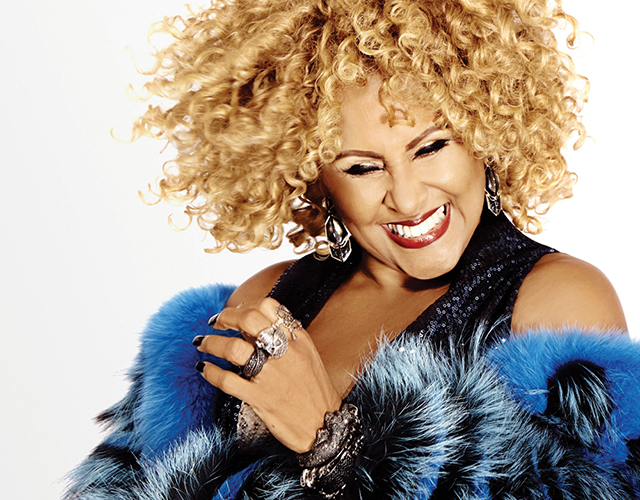 Courtesy of the Ordway
Darlene Love is back for her second Christmas show at the Ordway.

Friday at the Ordway: Darlene Love: Love for the Holidays. The Rock & Roll Hall of Famer was such a hit last year that she’s back for her second Christmas show at the Ordway. It’s not really Christmas until you’ve heard Love belt “Christmas (Baby Please Come Home).” Expect her hits as well, like “He’s a Rebel” and “(Today I Met) The Boy I’m Gonna Marry.” 7:30 p.m. FMI and tickets (start at $47).

Correction: An earlier version of this story had the wrong date for Darlene Love’s show at the Ordway.