Set in the newly restored Minnesota State Capitol, “Our House: The Capitol Play Project,” the new play from Wonderlust Productions, moves from the vault beneath the Rotunda to a public meeting room, a Senate hearing room, stairs, hallways, and the Rotunda itself, a place of neck-craning grandeur and majesty.

The characters include civil servants, a lobbyist, activists, tour guides, legislators, a security guard, ghosts, zealots, and toga-clad human embodiments of the four golden horses on the Capitol’s roof. Some are played by actors, most by members of the Capitol community – people who keep the state running. Ginger Commodore, one of four main characters, works in the Department of Commerce. (She’s also a great jazz vocalist and a member of Moore by Four.) Like Wonderlust’s “In My Heart: The Adoption Play Project,” seen at Mixed Blood in 2016, “Our House” is based on true stories gathered during a series of story circles held over a period of years.

Ambitious and challenging dramaturgically, logistically and financially – funding came from a Knight Arts Challenge Grant, a Kickstarter, MRAC, the State Arts Board and other sources – “Our House” is Wonderlust’s third play. Co-founded by Alan Berks and Leah Cooper, the company crafts plays from the memories and experiences of real people. It’s a courageous, risky, and time-consuming way to make theater. How can you know that story circles will yield enough material? How will you wrangle it all and shape it into something that grabs audiences?

Oh, and there’s live music, too. And original songs.

Like “In My Heart,” “Our House” works as theater. It doesn’t pack the emotional wallop of the adoption play, but it tells a story, the characters are convincing and you enter another world. The story turns on a case of mistaken identity. On her first day on the job, Sheila (Commodore), hired to work the information desk, is mistaken for the new governor’s chief of staff. Urged on by her fiery, outspoken daughter, Angela (Gabrielle Dominique), she speaks out on equality, diversity and the need for greater access to government for all. Hung on this surprisingly sturdy frame is a short course on the Capitol’s history, how Minnesota state government works and the importance of relationships to getting things done. Information is delivered as anecdotes and lively, sometimes heated conversations between characters. You learn something without feeling like you’re sitting in a classroom. You leave with a sense that many people who work in the Capitol are serious about serving the public, even if their version of what that means is not the same as yours.

The political climate, how government is perceived, and even what we think government means have changed since Berks and Cooper started gathering stories. That “Our House” opened the day after the federal government shut down is ironic, to say the least. But it’s a thrill to see a play among the marble columns and granite walls, bronze busts and paintings of our magnificent Cass Gilbert-designed Capitol. We were at Friday’s preview, and Wonderlust managed to move us all – a cast of about 20, a three-piece band and a sold-out crowd of 100+ people – from place to place without a noticeable hitch. The play is well acted and enjoyable, with moments of heart-touching seriousness and humor.

And it’s absolutely one of a kind, specific to our time and place, a world premiere with a short run. Definitely worth seeing. Just three performances remain – Friday, Jan. 26, at 7:30 p.m., Saturday at 12:30 p.m. and Sunday at 1:30 p.m. – and all are sold out. Plays have no-shows, so you can take a chance, arrive a half-hour early and put your name on a list. Unclaimed tickets will be released five minutes before each performance. The play is about 2 hours and 20 minutes long, including a 10-minute intermission. FMI. 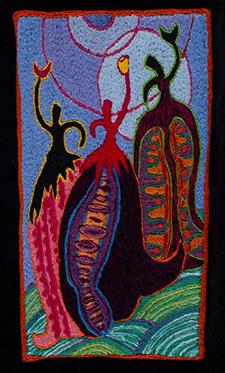 Courtesy of the Textile Center
“Three of Cups” by Laurel Izard

Tonight (Tuesday Jan. 23) at the Happy Gnome: Books & Bars: “Dead Man Walking.” The Minnesota Opera has been making more forays into the community. Earlier this month, the opera company, MinnPost and Mitchell Hamline School of Law co-hosted a panel discussion about the death penalty, social justice and forgiveness around “Dead Man Walking,” the opera that opens this week. Tonight Minnesota Opera President Ryan Taylor will drop by the Gnome to join B&B moderator Jeff Kamin for conversation around Sister Helen Prejean’s book, the inspiration for the opera (and the movie). 6:15 p.m. Free, but register here. Don’t worry if you  haven’t read it; there won’t be a test.

Wednesday at the American Swedish Institute: Frozen in Film: “Arctic Superstar.” Warm up at a free movie about an indigenous Sami rapper. Nils Rune Utsi, aka SlinCraze, lives with his mom in the Arctic Highlands of Norway. When he raps, it’s in an endangered language almost no one understands. This acclaimed music documentary, a film festival favorite, screens in Norwegian with English subtitles. (The tag: “100 words for snow. No word for Yo!”) Here’s the screener. Here’s a music video. 1 p.m. and 7 p.m. No museum admission required. The Frozen in Film series continues Wednesday, Feb. 21, and Wednesday, March 21. 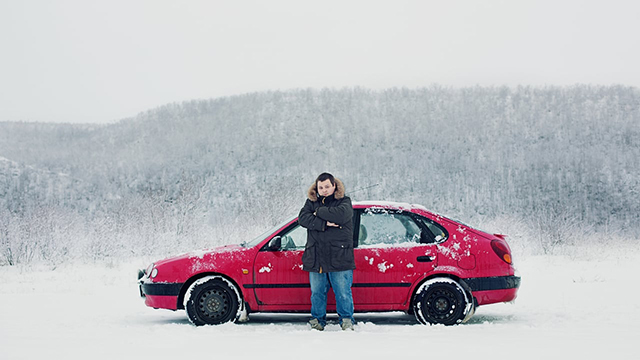 Courtesy of Indie Film
A scene from the acclaimed music documentary “Arctic Superstar.”

Wednesday at the Hamline Midway Library: Miriam Karmel presents “Subtle Variations and Other Stories.” A small neighborhood library with a working fireplace, Hamline Midway starts its 24th annual Fireside Reading Series with the winner of the inaugural First Fiction prize from Holy Cow! Press. Karmel’s collection explores topics of marriage, divorce, old age and motherhood. Presented by the Friends of the Saint Paul Public Library. 7 p.m. Free and open to the public, with coffee, cider, cookies and a book signing after. Here’s the full 2018 line-up.

Registration is filling up for the Luminary Loppet on Lake of the Isles on Saturday, Feb. 3. Whether you ski, snowshoe or walk the groomed trails, you must display an official Loppet glow stick. (“No glow, no go.”) In addition to the luminaries, which are magical all by themselves, the Loppet has fire dancers, an ice-Cropolis, an Ice-Henge, an Ice-ster Island, an Ice Pyramid, an Enchanted Forest and more chilly, glowing attractions. This year will also see the premiere of a concert performed on ice instruments. Percussionist, educator, and cultural anthropologist Marc Anderson is working with ice sculptor Trevor Pearson and musicians to create drums, xylophones, tubaphones, horns, shakers and more carved out of ice. If you were lucky enough to see Terje Isungset at the Cedar in 2013, you’ve had a taste of what this might be like. Loppet hours are 6-10 p.m. FMI and registration ($26/14 today; jumps to $30/15 on Jan. 30 and $40/20 on Feb. 3).