Last Thursday, prolific composer and McKnight Distinguished Artist Libby Larsen was at Icehouse, listening to mezzo soprano Clara Osowski howl like a wolf. The occasion was Minnesota’s first-ever SongSlam, an evening of new art songs that drew a cheering, whistling standing-room crowd numbering nearly 200. Larsen’s song was based on a poem by Bill Holm called “Wolf Song in Los Angeles,” about the bones of dire wolves found in the La Brea tar pits. With Mark Bilyeu at the piano, Osowski nailed it. Ar-oooooo!

Tomorrow (Thursday, Jan. 17) will find Larsen at TPT’s Street Space, hearing more of her work performed. Music about an early superhero, a real-life serial killer, a lion-taming bass player and the divine. Larsen describes the program of her Schubert Club Mix concert as “a cabinet of curiosities.” It will be a blend of new music (including a world premiere), video projections, multitracking and lighting design. Two of the selections are based on comic books.

“I’ve been working towards this direction for most of my career, and finally we’re at a place where I can do it. Yay!” Larsen said by phone last week from her home in Minneapolis. (She’s an ebullient, exuberant Distinguished Artist.) Which direction? “Shifting the formal concert to something more visual and narrative. Because the concert hall tradition is so refined and defined.”

The program at TPT will include “The Fantom of the Fair,” based on a 1939 comic by Paul Gustavson. (For context, the first Superman comic came out in 1939.) The Fantom lives below the New York World’s Fair, using secret trap doors to emerge and save people. He’s originally from Iceland, and he’s 1,000 years old. Larsen’s piece was commissioned by a conservatory in Connecticut and first performed in 2014. “You know how it is with inspiration,” Larsen said. “Suddenly 17 thoughts that have nothing to do with each other come together, and there’s your idea. At least, that’s how it works for me.”

Larsen has long been fascinated by heroes and superheroes. In 1994, she wrote a piece for VocalEssence called “Seven Ghosts,” about American heroes. Two years earlier, for her “Adventures of Wonderboy,” she created a group of large cartoon panels that could be moved around the stage on wheels. By 2014, the technology was available to deconstruct the pages of “The Fantom of the Fair,” fade in and out, remove and re-insert text, and move from panel to panel. It could all be done simply, from a laptop. Larsen describes the results as “an acoustically animated comic book.” 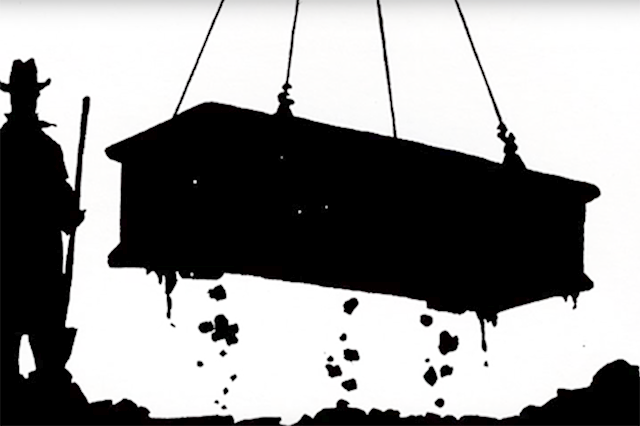 A still from Rick Geary’s animated narrative for “The Peculiar Case of Dr. H. H. Holmes.”

Also on Thursday’s program: “The Peculiar Case of Dr. H.H. Holmes.” A work in five movements for baritone and prepared piano, it’s based on the horrifying confessions of Herman Webster Mudgett, aka Dr. Henry Howard Holmes, known as America’s first serial killer. During the 1893 Chicago World’s Fair, Holmes is believed to have killed anywhere from 27 to 250 people. There’s nothing campy or funny about the music, and the prepared piano gives it an off-key, unsettling edge. Larsen said that “some won’t sing it because they don’t want to inhabit the role.”

At first the piece was performed without visuals. “Originally I thought if I can make Holmes real enough to get inside the heads of the listeners, I don’t need visuals because the listeners themselves will provide them – a kind of theater of the mind. In fact, it works well enough that some people are really creeped out.” But Larson wanted more. Now the music is accompanied by an abstract animated narrative created with Rick Geary, whose book “The Beast of Chicago” describes Holmes’ murderous career.

Turning again to comics, Larsen wrote “Love Doctor” for Thursday’s concert, where it will have its world premiere. Commissioned by the Schubert Club, adapted from a 1952 comic book, it’s the tale of a timid bass player who’s hopelessly in love with a torch singer. But is he man enough for her? Larsen promises “a technology refinement of what I was doing with ‘Fantom of the Fair,’ ” adding, “One thing I love about comics is you can move into the world of the absurd really quickly, and it’s a great deal of fun.”

The “cabinet of curiosities” ends with a new setting of “O Magnum Mysterium,” a medieval Latin chant from the Matins of Christmas. Larsen joins a centuries-long line of composers who have written music for this text, including William Byrd, Palestrina, Poulenc, and Morten Lauridsen. Larsen wrote hers for her friend Paul Phoenix, a former tenor in the King’s Singers, who will sing it at TPT. “I wondered if it’s possible, in the Magnum Mysterium, to actually surround ourselves with divinity,” Larsen said. As Phoenix sings, he’ll be surrounded by speakers playing 12 more tracks of him singing, recorded earlier at a studio in London. That, plus lighting design and strings, “should lead us from the human to divine.”

The four parts of the concert will be linked by four short sections from “Evening in the Palace of Reason,” a longer piece Larsen wrote for the Saint Paul Chamber Orchestra in 2007. The eight parts together form “a kind of ‘Pictures at an Exhibition,’ ” she said.

Composer Libby Larsen calls her next concert ‘a cabinet of curiosities’