On Tuesday night – the day after the Trump administration announced that nearly 200,000 Salvadorans now in the U.S. will have to leave, and the day Trump seemed open to negotiating a new immigration deal, and around the same time a federal judge in California ordered the administration to restart the DACA program  – Jack Reuler and Joseph Haj stood together on the stage of Mixed Blood Theatre in Cedar Riverside. “This evening will make the political personal,” said Reuler, Mixed Blood’s artistic director. “Theaters make poor forts, but great bridges,” said Haj, artistic director of the Guthrie.

The two theater leaders were introducing “Enacting the Dream,” a free community event about the Development, Relief, and Education for Alien Minors (DREAM) Act. It was technically a Guthrie “Happening,” one in a series of in-the-moment public conversations Haj has been hosting at the Guthrie. But instead of taking place on the Guthrie’s Level Nine, it was at Mixed Blood, whose neighborhood includes some 4,500 people from 65 countries speaking 93 languages. A near-capacity, mostly white crowd had gathered to learn more about the realities of living in perpetual uncertainty. “This is part of our everyday conversation,” Reuler said.

The evening began with a reading from Karen Zacarías’ play “Just Like Us,” which she based on the real lives of Dreamers. Zacarías’ “Native Gardens” was a hit at the Guthrie last summer. Since September, when the Trump administration announced the end of DACA, Zacarías has made “Just Like Us” free to any institution that wants to use it to raise awareness. Born in Mexico, she once faced the possibility that she would be deported.

After the reading from the play, which follows four Latina teenagers in Denver – two documented, two undocumented – whose lives are complicated by the craziness surrounding immigration, things got real.

Carlson led us through the basics of DACA and DREAM, which are not the same. “DACA is always temporary,” she said. “DREAM is a way to becoming permanent.” She equated the end of DACA to whiplash. She talked about a student with a 4.0 GPA and a soccer scholarship who couldn’t travel outside the U.S. to play because she might not get back in.

Ramos explained how immigrants’ hopes are limited in the so-called land of opportunity. “Many young people don’t even consider college,” he said. “Some quit high school and get jobs. They’re already giving up.” He reflected on how “we [immigrants] are judged by the actions of a few. Historically, that has not changed.”

Diehl, who recently came to Minnesota from Miami, feels “immense pressure to do a good job. You cannot fail.” Her mother is an immigrant from Guatemala who finished college; her grandfather was a Cuban immigrant. For Diehl, “moving to Minnesota has been this out-of-body experience.”

Karina was the evening’s poster child for everything wrong with current immigration policies. Her younger sisters are documented; she is not. The older she gets in the current climate, the more her options narrow. “When I get sick, I can’t go to a doctor,” she said. “I never chose to be different from everyone else. Everyone sees you as ‘that alien.’ That turns into you hating yourself for not being born here. … I can’t say I’m Mexican. I can’t say I’m American, either. I’m not anything.”

Martinez urged us to end on a positive note, to suggest a meaningful action. Carlson offered this: “When we are citizens, we can pick up the phone. Email your representative and congressperson. DACA and DREAM have huge support among U.S. citizens. And vote! Vote your conscience and goodwill.” 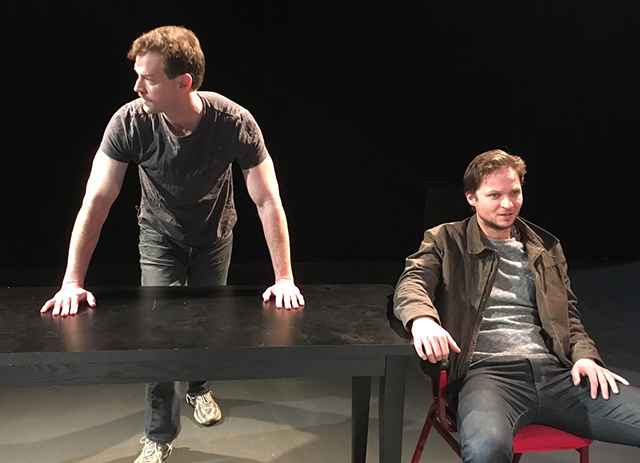 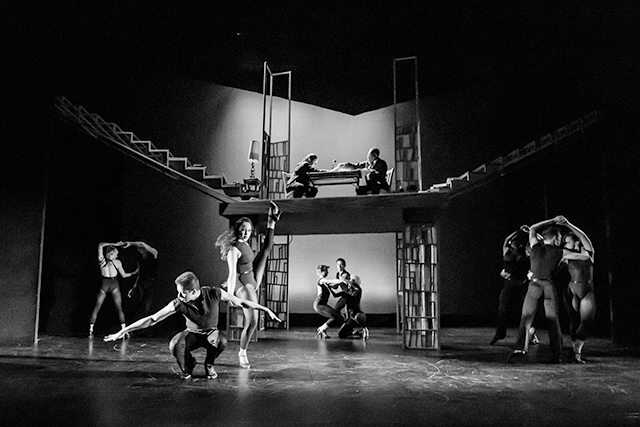 Photo by Tino Tran
Saturday at the Ordway, a performance by Seattle-based Spectrum Dance Theater.

Saturday at the Ordway: Spectrum Dance Theater: “A Rap on Race.” In 1970, James Baldwin and Margaret Mead held a lengthy, candid, far-ranging conversation on race. It was recorded, transcribed and published as the book “A Rap on Race.” Forty years later, playwright and actor Anna Deavere Smith and choreographer Donald Byrd, artistic director of the Seattle-based Spectrum Dance Theater, created a new work based on this historic talk. Fusing dance with theater, set to music by Charles Mingus, it goes beyond the limits of language and enlivens our current conversation around racial and cultural equality. The Seattle Times called it “a tight, 80-minute mix of quest and showdown.” With Byrd as Baldwin, Kathryn Van Meter as Mead and company artists from Spectrum. 7:30 p.m. FMI and tickets ($19-40). Come at 6:30 for a pre-show discussion on racial justice in the arts that will include excerpts from Threads Dance Project’s “The Secrets of Slave Songs.”

Saturday and Sunday at Crooners: Bryan Nichols and Brandon Wozniak Live Album Recording. Nichols is a pianist, Wozniak a saxophonist. What, no drums or bass? In 2017, the two discovered their mutual love for “People Time,” an album of duets by pianist Kenny Barron and saxophonist Stan Getz, recorded live in Copenhagen in 1991. “We got to talking about how fun it might be to do our own recording in a similar vein,” Nichols said. Fun for the audience, too. Nichols and Wozniak have been friends and colleagues for 10 years, playing together in various configurations, achieving what Nichols calls “a near-telepathic interplay.” They’re planning a mix of original compositions and standards, with an album to follow. Saturday at 6:30 p.m., Sunday at 7:30. FMI and tickets ($10-12); 763-760-0062.

‘Enacting the Dream’ draws a crowd to Mixed Blood; ‘Forever Flight’ opening at the Southern