In November 2008, the future of the Minnesota Museum of American Art looked grim. Longtime director Bruce Lilly had resigned. It had lost its St. Paul space to redevelopment. It was financially strapped in an economic downturn. In what sounded like a death rattle, the museum announced it would close its exhibition space and reduce its staff.

What a difference 10 years can make. In June 2009, Kristin Makholm was hired away from MCAD as MMAA’s new director. In October 2012, the museum partially reopened in a small suite on the street level of the Pioneer Endicott building. The shows it hosted there offered glimpses into its collections of American masters and contemporary Minnesota artists.

In 2017, MMAA rebranded as “the M” and revealed ambitious $12.5 million development plans. Staying put in the historic Cass Gilbert-designed Pioneer Endicott, it would expand into 20,000 feet of public space including a state-of-the-art gallery, community gathering spaces and a sculpture court with a sky bridge. That’s now known as Phase 1, scheduled for completion in late 2018. By 2019, the end of Phase 2, it will have added 16,000 more square feet of gallery space.

Makholm called attention to the M’s “sixfold expansion,” from 6,000 to 36,000 square feet, and the promise of more exhibitions, initiatives, classes and accessible public experiences. She acknowledged that the M stands on the traditional territory of the Dakota people. “Our relationship to this land and its indigenous people will inform the museum’s work now and into the future,” she said.

Carter praised artists for being a part of “every good thing that’s happened: civil rights, women’s rights, labor rights. All those moments that have been transformational in moving our country forward, artists have been at the forefront.” Coleman noted that the St. Louis Museum of Art is also a Cass Gilbert-designed building and predicted that the M would be better. “I don’t think there’s a building that represents the transformation of downtown more than this building,” he said, recalling the days when the Pioneer Endicott stood empty.

Hausman, introduced by Makholm as “our incredible and tenacious champion on the Hill,” emphasized that arts and culture keep us economically healthy and competitive. “The mayors understand that. The city council understands that. State leaders need to understand that as well,” she said.

On ‘Dead Man Walking’ at the Ordway

Because we saw the final dress rehearsal of Minnesota Opera’s “Dead Man Walking” and not an actual performance, this is not a review. Rather, it’s a series of responses to a profound and powerful work in our midst.

Based on the book by Sister Helen Prejean and the Oscar-winning movie that came after, written by Jake Heggie (music) and Terrence McNally (libretto), “Dead Man Walking” is about the relationship between a convicted murderer facing execution and a Catholic nun who becomes his spiritual adviser. It’s about the widespread consequences of violent acts. It’s about capital punishment, without asking us to take sides; some characters are for it, some are against it, and all have their reasons.

Parts are tough to watch. The prologue is a shocker (you can wait to be seated after, if you want), the end almost unbearably intense. One of the most indelible scenes occurs when the killer’s mother asks Sister Helen to take a picture of her with her sons, shortly before his death. She smiles for the camera.

In a way, it’s a romance; real love develops between Joseph De Rocher, the killer, and Sister Helen Prejean, the nun. It’s deadly serious, but with moments of human warmth and even humor. 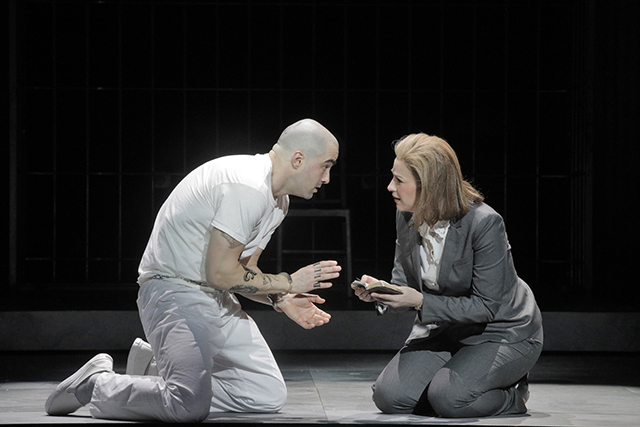 In a time of so much CGI that dead actors can play key roles in big-budget films and much of what we see and hear is tweaked, augmented or wholly artificial, nothing compares to singers on stage (no pitch correction, no lip-synching) and a conductor-led orchestra in the pit. The air is electric. If you’re looking for authenticity, opera is one place to find it.

Modern operas can be musically challenging. You won’t come out of “Dead Man Walking” humming tunes. To some ears, trained operatic voices singing contemporary words and ideas sound weird. As with any new music, the best approach is simply to listen. “Dead Man Walking” is the most popular 21st-century opera in the world. The music fits the story. It soars and screams, struggles and mourns. Parts are incredibly beautiful; parts are horribly sad.

Three hours (including one intermission) go by quickly. There wasn’t a moment when we thought, “Can we please speed this along just a little?” Mezzo-soprano Catherine Martin is luminous as Sister Helen. Baritone Seth Carico is a tightly wound spring as Joseph De Rocher. Head shaved, he has the look to play the role, and the physical build and strength; he sings while doing push-ups. Soprano Emily Pulley breaks your heart as Joseph’s mother, holding on desperately to her denial of his crimes. Soprano Karen Slack is a rock and a refuge as Sister Rose, Helen’s superior and friend.

The staging uses projections, which are often misused or overused and can seem cartoonish. Here, they make sense. They let us know we’re on the road with Sister Prejean, in the prison, in the convent, in a school. They make us feel boxed in, like Joseph and the other prisoners on Death Row. They create an uneasy sense of movement toward an inevitable conclusion.

Two performances of “Dead Man Walking” remain, on Thursday and Saturday. If you’ve been saving up your pennies for something special, consider this. FMI and tickets (start at $25).

At the Capri Theater: Prince Legacy Tours. On Jan. 5, 1979, at a small theater on West Broadway, Prince played “the gig that started it all.” Photographer Greg Helgeson was there to make a visual record. The Capri is pitching this to Prince fans in town for the Super Bowl, but Prince fans who live here can also take a self-guided tour of Helgeson’s now-historic photos, the auditorium and the stage. On the hour from 10 a.m. to 4 p.m. through Monday, Feb. 5. FMI and tickets ($20). Proceeds benefit the Capri’s arts programs including the Youth Apprentices. 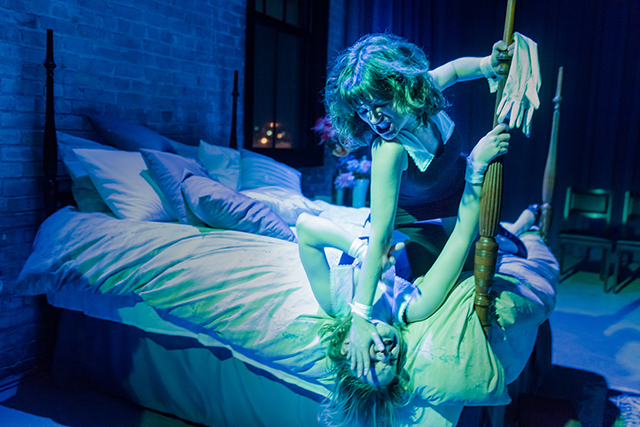 Photo by Rich Ryan
Sara Marsh, top, and Jane Froiland are sisters Solange and Claire in “The Maids.”

At the Grain Belt Warehouse: “The Maids.” Don’t mess with the women of “The Maids,” the latest play from fearless Dark & Stormy Productions. Jean Genet’s convoluted 1947 drama tackles issues of power, servitude, sexuality, violence and revenge while hinting strongly at incest. Sara Marsh and Jane Froiland are the two murderous sisters, Emily Bridges (Beau’s daughter) a surprisingly gracious Madame in a three-person one-act that begins with a sadomasochist role play. Marsh, the company’s founder and artistic director, also became director of “The Maids” when Mel Day had to drop out for health reasons. She liked directing. 77 13th Ave. NE, Minneapolis. FMI and tickets ($34/39/15). Eleven more performances from Thursday, Feb. 1, through Saturday, Feb. 17.

Thursday at the Dakota: Nooky Jones. The six-member neo-soul band fronted by vocalist Cameron Kinghorn brings its jazzy, funk-infused sound to the Dakota in the middle of Super Bowl week. 7 and 9:30 p.m. FMI and tickets ($25/20/15). Here they are on “MN Original.”

The M starts construction in the Pioneer Endicott; ‘The Maids’ at Grain Belt