When Ryan Taylor became the Minnesota Opera’s president and general director in May 2016, he brought more than experience as an administrator. For 10 years, Taylor was an operatic baritone, performing more than 30 roles with companies across the U.S., including the Minnesota Opera.

His final role was in “Dead Man Walking,” the opera based on the book by Sister Helen Prejean, with music by Jake Heggie and libretto by Terrence McNally, that opens this weekend at the Ordway.

“It was the last piece I ever sang when I had a performance career,” Taylor told MinnPost earlier this week, “and it was the only one I ever fought for. I did not sing the lead. I sang Owen Hart, a small but pivotal role. The moment he appears – his vocal entrance – punches you in the gut. I bartered with an opera company that wanted me to come and sing something else. I said I’d sing the other thing, but they had to let me do Owen in the following season. I ended up doing both.”

Taylor’s passion for “Dead Man Walking” is one reason we’ll see it here. We say “one reason” because when asked how the 2017-18 season came together – the first Taylor had a hand in as president, because 2016-17 was already in place when he arrived – he emphasized rather strongly that it had been a team effort.

“For many years in our country, and around the world, there was someone who was the artistic guide for each organization, whether you were a ballet or a theater or an opera,” Taylor said. “But as the landscape has changed, it’s important for us to realize that many viewpoints should help influence the artistic decisions.” At the end of this season, Dale Johnson, the opera’s artistic director for more than 30 years, will step back to an advisory role. He will not be replaced.

Why bring “Dead Man Walking” to Minnesota? “I love this piece,” Taylor said. “What you want in opera is a great story and evocative, beautiful music written by someone who understands the voice. There’s a reason this is the most frequently performed new American opera of the past 20 years.” Since its 2000 San Francisco premiere, there have been more than 50 productions.

Taylor sang in the Fort Worth Opera production in 2009 and has seen four others. The one we’ll see at the Ordway is the Vancouver Opera production that opened in April 2017, with stage direction by Joel Ivany, scenic and projection design by Erhard Rom and costumes by Sheila White. Taylor called the Vancouver production “one of the most gratifying I’ve seen.” Working with Ivany, the Minnesota Opera made a few tweaks. “Pretty minor things,” Taylor said. “Colors of costumes here and there, and a way to open part of the set a little wider to bring the audience closer to the action.”

What makes “Dead Man Walking” great? “It’s a big, epic, emotional journey, but the story is very immediate and very simple,” Taylor said. “There’s something magical about the way the libretto and the music work together to pull you in. Some operas you feel like you’re sitting through and watching the story unfold. This one pulls you forward through the entire piece until you get to the end, and then it drops you.”

The opera is also timely. “You’re not going to leave the theater wanting to do a tap dance. But it’s not the kind of piece that leaves people more polarized than when they went in. It absolutely convinces you of the nuance surrounding some of the issues we grapple with.

“I remember the first time I sang it in Fort Worth. I thought – here’s a state that is relatively conservative on the whole, and they might not appreciate this piece. I was a little nervous because we would go out and meet the audience and the patrons after the show was over. I thought – this is not going to be any fun. I’ll get an earful about their beliefs. I did get an earful, but I also got a lot of questions. What would I do if my daughter was the victim of a violent crime? It made me challenge what I thought, and it made others challenge what they thought, and we had a very open conversation.”

Any tips on what to listen for musically? “Jake is a master of the motif. If you’re someone who likes to home in on musical exploration, listen for those sonorities or melodies that appear whenever a certain character is onstage. If you’re coming to the piece for the first time, it’s interesting to see how many different genres of music he’s put into it. There are jazz influences, lullabies, sappy ’80s pop music references, gospel, rock-and-roll. There’s a bit of Verdi. He drew from many musical influences and created something that was brand spanking new when he put it onstage. At the same time, it’s pretty melodic. There are things that are challenging, but it’s easy to listen to, and there are definitely tunes that stay in your head.” 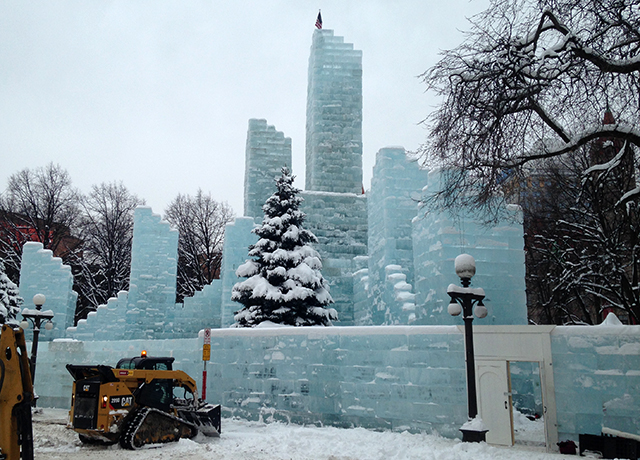 MinnPost photo by Bill Lindeke
Final touches being made to the Ice Palace in Rice Park in St. Paul.

On now: Saint Paul Winter Carnival. We’re supposed to put aside our old ways and start thinking of every winter-related event in the Twin Cities as part of The Great Northern. Well, maybe next year. Winter Carnival is in full swing and complete with an ice palace in Rice Park. The Moon Glow Pedestrian parade was last night, but there are two more parades to come. The Saintly City Cat Show takes place Saturday and Sunday at the the RiverCentre, and the Pioneer Press Treasure Hunt is under way. Here’s the whole calendar of events taking place in St. Paul and on the Minnesota State Fairgrounds. Here’s just the new stuff. If you find yourself on 4th Street in downtown St. Paul, take a moment to notice the lampposts. More than 160 have been wrapped in handmade cozies that were knitted, crocheted, woven and/or quilted by 160 Minnesota residents. The project is called Saint Paul Cozy, and it makes us feel all warm and fuzzy. The art installation will stay up through March 3. 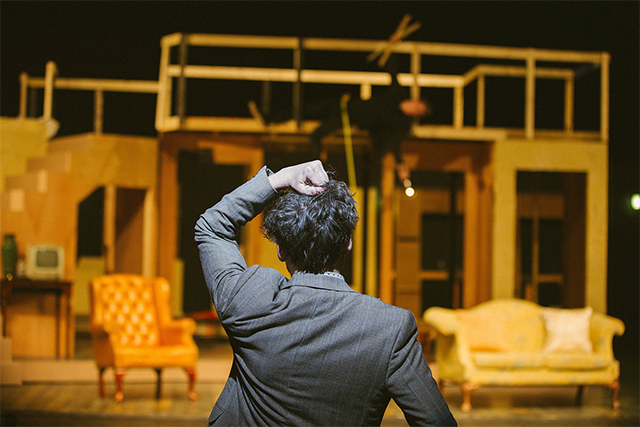 Courtesy of Artistry
“Noises Off” at Artistry closes Feb. 18.

Starts tonight (Friday, Jan. 26) at Artistry: “Noises Off.”  Angela Timberman stars in Michael Frayn’s comic play-within-a-play about a theater company putting on a farce. Benjamin McGovern directs; his production of “Wit” for Artistry won a 2017 Ivey Award. With Riley McNutt, Caitlin Burns and Paul Rutledge. In the Schneider Theater, the bigger of Artistry’s two stages. 7:30 p.m. FMI and tickets ($41/$36/$12). Friday is a ticketed preview ($12); Saturday is opening night. Closes Feb. 18. Btw Artistry’s current production of “The Last Five Years” in the black box is totally sold out, including the added performances. 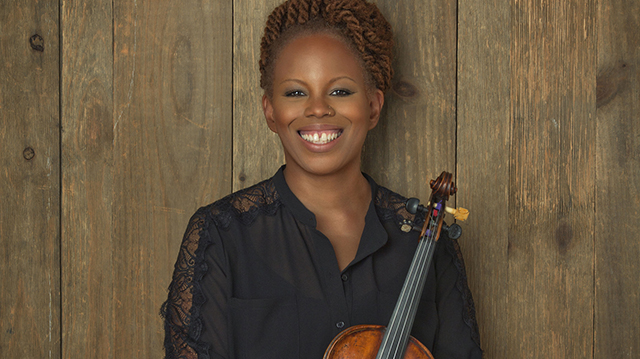 Sunday at Crooners: Twin Cities Winter Jazz Festival. Over the years, Winter Jazz Fest has bopped around, moving from Lowertown to MacPhail in Minneapolis to the St. Paul Hotel. This year it’s heading north to Fridley, where it will take over Crooners starting at 1 p.m. Both the main lounge and the Dunsmore Room will be in use for almost a dozen performances ending in a jazz jam. Headliners Regina Carter and Xavier Davis will play two sets in the Dunsmore, where tables will be replaced by stadium seating to accommodate the crowds. The Crooners move may be the ticket to success; the festival is sold out.

Tuesday at the History Center: Curt Brown: “Minnesota, 1918: When Flu, Fire, and War Ravaged the State” book launch. In the first year of a global conflict that would later be known as World War I, Minnesotans also experienced horrific events at home: an influenza epidemic that left more than 10,000 dead and fires that raged across 1,500 square miles in seven northeastern counties, killing hundreds and leaving thousands homeless. Scouring letters, diary entries, newspaper accounts and interviews, Brown tells a tale of Minnesota perseverance. 7 p.m. Free and open to the public. Can’t make the launch? Brown will hold a fireside chat at the Hennepin History Museum on Thursday, Feb. 1, at 6 p.m. Included with museum admission ($5/3).