Just when you want to curl up under a blanket and wait for winter to go away, the Walker says, “Get dressed and get Out There.” Forget the c-c-c-cold and see something provocative, poetic, shocking, funny, strange or puzzling. Now in its 30th year, the Walker’s annual Out There festival is how to start the New Year. Clear the cobwebs and reset your head.

All four January weekends are filled with experimental theater and performance works, plus chances to meet the artists. FMI, times and tickets ($25/20 members). Buy the series, save $$.

Jan. 11-13: Dana Michel: “Mercurial George.” Wandering through heaps of debris, Montreal-based choreographer/performance artist Michel searches for herself. Here’s an enchanting interview with her from 2015. (She originally planned to be an accountant.) 75 min. Mature content and strobe lights.

Jan. 17-20: 600 Highwaymen: “The Fever.” Last year, the audience sat on the McGuire stage, not in the theater seats, for Andrew Schneider’s “Youarenowhere.” It’s different down there. “The Fever” is described as “performed in complete collaboration with the audience,” but this is Minnesota, so participation is optional. Surprise yourself. 90 min.

Jan. 25-26: Forced Entertainment: “Real Magic.” From the UK’s leading experimental theater company, now in its 33rd year: a tale of optimism, repetition, mind-reading, anticipation, hope, defeat, and the question of whether change is possible, told by a cast of three, sometimes wearing chicken suits. A Walker commission. 90 min.

Jan. 27: Forced Entertainment: “Quizoola!” A six-hour performance/social event at the Soap Factory, during which the performers ask and answer questions, from trivial to personal (“An answer must always be attempted”). Stay as long as you like; pop in and out. Performance from 4-10 p.m.

Jan. 27: Out There 30th Anniversary Party. Stay after “Quizoola!” or come for the party. Free drink tickets (first-come, first-served) and free snacks by Chowgirls. 10 to midnight at the Soap Factory.

Omnifest at the Science Museum

The Science Museum’s perennially popular festival of super-sized movies has something for everyone – train buffs, spelunkers, explorers, animal lovers, people in love with flight. Five films will be in rotation for two months on the Omnitheater’s 90-foot domed screen. Even though IMAX is not a new technology (nerd alert: the first IMAX film screened at Expo ’70 in Osaka), it’s still pretty amazing to sit high in a theater and be wrapped in moving images.

Omnifest starts Friday, Jan. 5, and runs through Thursday, March 1. Screenings are on the hour starting at 10 a.m. FMI including times, trailers and tickets ($9.95/$8.95). Buy in advance, avoid the lines.

Travel to Tanzania with “Jane Goodall’s Wild Chimpanzees.” Watch chimps hunt, play, and communicate with each other; meet the next generation of researchers who will carry on Goodall’s work. A Science Museum of Minnesota original production. “Journey Into Amazing Caves” follows two women into the ice caves of Greenland, the underwater caves of Mexico’s Yucatan Peninsula, and the rocky caves of the Grand Canyon as they search for extremophiles – microorganisms that thrive under extreme conditions. 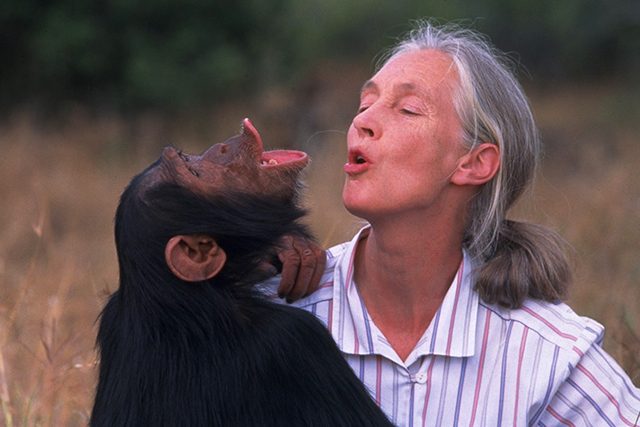 In “Wolves,” nature photography and historical footage bring you close to these nearly mythical creatures in their natural habitat. “Rocky Mountain Express” takes you on a present-day steam-train journey through the Canadian Rockies and tells the story of the building of Canada’s first transcontinental railway. “The Magic of Flight” starts by examining how birds fly, looks back at the Wright Brothers, soars with the Blue Angels and nails precision landings on aircraft carriers.

Almost all IMAX theaters these days are digital only. The Omnitheater is the only theater in Minnesota that screens large-format film on a daily basis, and one of the only remaining such theaters in the world. The reels are huuuuuuuge.

In 2011, the Minneapolis-based law firm Lindquist & Vennum and Milkweed Editions launched an unusual partnership: a poetry contest. The law firm’s foundation would fund the $10,000 prize and the press would publish the book. Six books and $60,000 later, this is still happening.

Submissions open today for the seventh year of this premium prize, one of the nation’s largest annual regional literary prizes. Poets must reside in Minnesota, Iowa, North Dakota, South Dakota or Wisconsin. This is not a first-book prize; poets may be at any stage in their career. There is no entry fee. Complete guidelines are here.

This year’s judge is Rick Barot. Submissions will close Feb. 15. Finalists will be announced in April, the winner in May, with publication (and a book launch/celebration) in November.

Now at Norway House: “Gingerbread Wonderland.” Are you not quite ready to let go of Christmas? The anticipation, the magic, the excited little voices? Grab the kids or a friend and head to Norway House for an exhibit of more than 80 gingerbread structures made by community members and local bakers – including “Mosque” by Colette Bartkowski of Edina, the People’s Choice best-of-show winner in the adult category. See a VR tour of Gingerbread City in Bergen, Norway, which includes 2,000-plus structures and inspired the show at Norway House. $5 for 12 and older, free under 12. Closes Sunday, Jan. 7. Open late (until 8 p.m.) Wednesday.

Thursday at the Woman’s Club of Minneapolis: Virtuoso Baroque. The Brainerd-based Lakes Area Music Festival takes place in the summer but holds a winter series in the Twin Cities. This winter, it’s in residence at the Woman’s Club. Minnesota Orchestra’s Roma Duncan will lead a baroque chamber ensemble of LAMF musicians in a piccolo concerto by Vivaldi and Bach’s fifth “Brandenburg.” Cash bar and menu available at 6 p.m., music at 7. Free and open to the public. Donations accepted. Also Sunday (Jan. 7) at 2 p.m. at Trinity Lutheran Church in Brainerd. 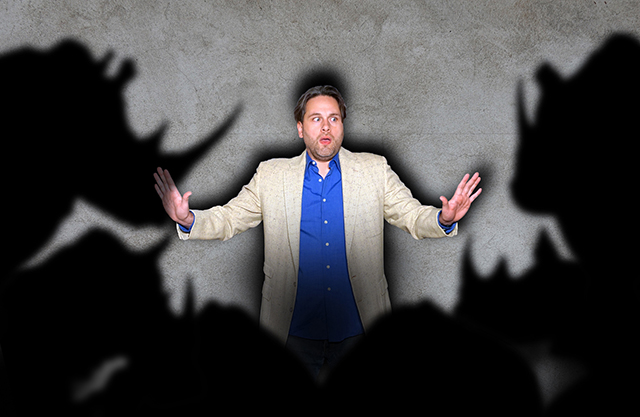 Photo by Bob Suh
Weekends through Jan. 28 at Theatre in the Round: “Rhinoceros.”

Friday at Theatre in the Round: “Rhinoceros.” TRP starts the New Year in its newly trompe l’oeiled building on the West Bank with a nod to the French avant-garde. Ionesco’s play, written in 1959, asks “What does it mean to remain human in the face of a trampling herd”? Good question. FMI and tickets ($22). Weekends through Jan. 28.

Sunday at the Como Park Conservatory: Music Under Glass: Paul Metsa. Can’t afford to flee the cold for a sunny beach? What about a free concert in tropical gardens closer to home? Como’s Marjorie McNeely Conservatory is a tonic in the winter months, even more so when it’s filled with live music. This year’s Music Under Glass series kicks off with folk singer, bluesman, guitarist, author (“Blue Highway”) and dog lover Paul Metsa. 4:30-6:30 p.m. Free. Beer and wine will be available for purchase. Here’s the whole winter lineup, if you want to take a look.

Opens Thursday, Jan. 18 at the Rochester Art Center: Eamon O’Kane: “Intimate Expansive.” Born in Ireland, based in Denmark, a professor of fine art at Bergen Academy of Art and Design in Norway, Eamon O’Kane is interested in (among other things) the architectural influence of Frank Lloyd Wright in the Upper Midwest. This mid-career retrospective of O’Kane’s work will include three original paintings of Wright homes in Rochester; a new series of paintings, drawings and animations based on Wright’s Taliesin in Spring Green, Wisconsin; and a refreshed reinstall of the interactive show “Froebel Studio: A History of Play” that highlights the connection between Froebel (whose famous maple building blocks influenced many Modernist architects) and Wright. 6-10 p.m., artist talk at 6. Free; RSVP here. Related programming includes guided trolley tours of Wright-designed homes in the Rochester area (three weekends starting Jan. 20) and interior tours of two FLW homes in April. FMI.

The Walker wants you ‘Out There’; Omnifest at the Science Museum