Overheard after Robert Wilson’s lecture last week at the Minneapolis Institute of Art: “This exhibition will change everything.”

The exhibition is “Power and Beauty in China’s Last Dynasty,” which opened Saturday in Mia’s Target Galleries. Conceived and designed by Wilson, a titan of the arts (theater, opera, and visual arts), it’s not a museum exhibition in the usual sense. It’s an experience complete with sights, sounds, special lighting, even smells.

Objects selected from Mia’s vast collection of Chinese art are arranged in a thematic progression of 10 galleries. Some galleries contain many objects; three hold one each, and two are obscured. Walls are lined with specially printed paper, mylar, straw, 18-gauge stainless steel panels and dried mud.

What’s missing are labels (those paragraphs on the wall that tell you what you’re seeing), a catalog (there isn’t one) and docents (starting Feb. 20, they’ll be around, but only as you exit). You’re offered a brochure at the end that describes the themes and, in a parsimonious sort of way, a single object in each gallery.

So, what to make of it all? That’s up to you. Wilson, who gave a lecture last Thursday and spoke with the press earlier that day, was very clear. “If you go to a gallery or a museum that has labels, the first thing people do is bend over and read the labels before they look at the work. … What you experience is what’s most important.”

He talked about seeing an exhibition at the Metropolitan Museum of Art in New York City. The head curator walked him through it. “I felt like I was in high school,” Wilson said. “So often it feels like I haven’t read all the books or I don’t have the background, or somebody’s lecturing to me the way I was lectured in high school. It was a very academic approach to showing something. Exhibitions can be like that. You feel like you’re being lectured. Let history books do that.”

Should you see “Power and Beauty”? Absolutely. Here are six reasons why:

1) To stand in Robert Wilson’s light. To have one of his works in the Twin Cities is hugely important. To be able to wander through it, pause and ponder, and take photos if you want (no flash, and don’t be annoying) is a rare opportunity. This show is a window into the mind of a protean thinker and fearless innovator.

2) To learn something about Liu Yang. He’s Mia’s curator of Chinese art and head of the museum’s Department of Chinese, South and Southeast Asian Art. It was his idea to approach Wilson with this project. Liu knew Wilson and also that Wilson collects Chinese art. Liu’s other exhibitions at Mia have included the record-breaking “China’s Terracotta Warriors.” He’s a curator to watch.

3) To see the objects. Mia’s collection of Asian art includes nearly 17,000 objects. “Power and Beauty” features 154, from tiny snuff bottles to an Imperial throne, a Standing Buddha statue and an emperor’s ceremonial court robe embroidered with nine dragons. To see such a precisely curated collection up close, with objects meticulously positioned in relation to each other (Wilson’s doing), is a treat. 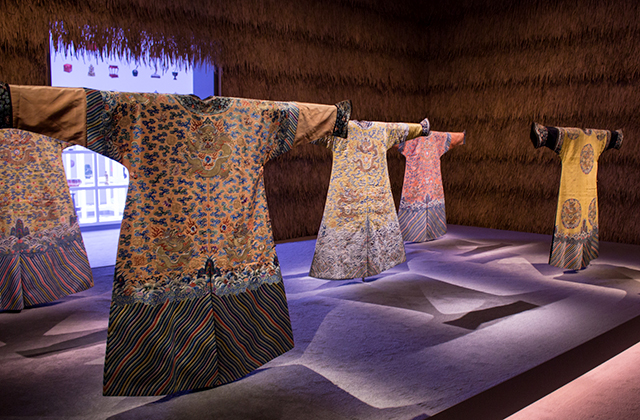 4) To support Mia. Our largest art museum is thinking outside the granite-and-marble box. It recently launched an international initiative to explore whether art breeds empathy, and if museums can use their collections to build empathy and, from there, a better world. Currently it’s hosting the first-ever major museum exhibition of contemporary Somali art.

Deputy director and chief curator Matthew Welch told the press, “We’ve installed exhibitions the same way for the better part of our 100-year history, but under our fearless leader, Kaywin Feldman, we have really been stepping out.” They certainly have. Robert Wilson didn’t design “Power and Beauty” for free, and the installation itself was costly. Buy a ticket.

5) To have fun. “Power and Beauty” takes some of the reverence and solemnity out of the museum experience. True, these are important and valuable objects. And some people around you may want to view the whole thing very seriously, so be respectful. But “Power and Beauty” is playful at its core. Sometimes even silly. We don’t want to give too much away, but … a toilet flushes. A lion roars. Someone screams. Thunder suddenly crashes (be glad you’re not holding a drink). Someone sings a happy song. Wilson said, “Bring the children.”

6) Because you won’t see it anywhere else. No one will. It’s ours alone. It won’t tour. And it closes May 27. Tick-tock. 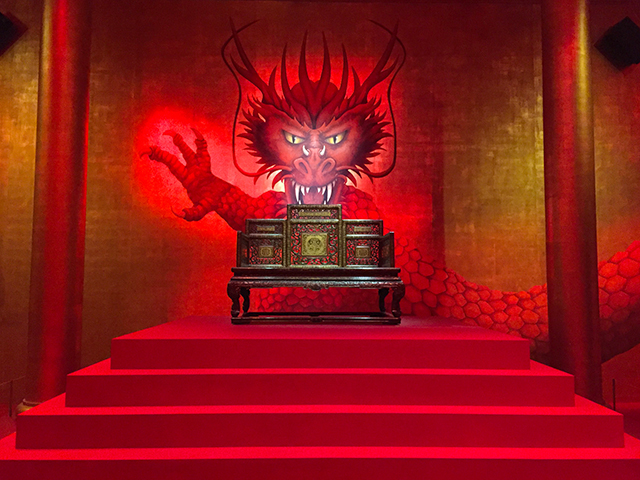 Will this exhibition “change everything”? Probably not. It can be frustrating to look at a bowl, a scroll, or a sculpture and not have the chance to learn even the basics about it – what it’s made of, where it’s from, how old it is, what its purpose was or might have been. We missed that. “Power and Beauty” is exhilarating but can also be kind of taxing. It’s like watching an opera you don’t know performed in a language you don’t speak, without supertitles. (Although Wilson, who once created a silent opera seven hours long, would say, “And your problem with that is what?”)

But it can and should and likely will change some things. How curators approach exhibitions. How old things can be made to seem new. What audiences expect when they go to a museum, and what they receive. The risks both museums and audiences are willing to take. How we see and think about objects and museums, and maybe ourselves and each other.

Because of how the exhibition is arranged and the experience it’s meant to deliver, capacity is limited and tickets are timed. “Power and Glory” closes on May 27. FMI and tickets ($20/16).

P.S. You might have heard that you’re asked to spend nine minutes in silence in the first gallery, a dark room with a single, lightly illuminated object. The point is to empty your mind before moving on. The good news: Nine minutes have been reduced to five.

Tonight (Friday, Feb. 9) at Penumbra Theatre: “Joy Rebel.” Khanisha Foster is the daughter of a former Black Panther and a white mother whose family invented Bubble Wrap. As a child, she learned that her grandmother loved her but condemned her parents’ interracial relationship. Today Foster is an actor, writer, director and featured storyteller on NPR’s “Dinner Party Download.” Directed by Lou Bellamy, her one-woman autobiographical work is having its world premiere here, as part of Penumbra’s annual Claude Edison Purdy Individual Artist Festival. FMI and tickets ($25); 651-224-3180. Through Feb. 18.

Opens tonight at Theatre in the Round: “Emma.” In Sandra Fenichel Asher’s adaptation of Jane Austen’s novel, Austen herself is a character, shepherding Emma Woodhouse, her trusting protégé Harriet Smith, and Mr. George Knightley through the story. Directed by Ivey winner Miriam Monasch, with Gabriella Abbott in the title role and Jenny Eisenbraun as Austen. 7:30 p.m. FMI and tickets ($22); 612-333-3010. Through March 4.

Saturday at the Weisman: “Out of the Box Opera: Opera + Jazz/Soul.” The upstart opera company that presented a “Diva Cage Match” at a boxing gym last fall is back with another new idea: an evening of Puccini, Gershwin, Mozart, Stevie Wonder and more performed by tenor Chris Colmenero, mezzo soprano Clara Osowski, soprano Brittany Ann Robinson, bass Ben Sieverding and opera/musical performer Dom Wooten. With Lara Bolton on piano, Doug Little on saxophone and Nate Babbs on drums. In the Davis Gallery at the Weisman. Doors at 6:30 p.m., program at 7. FMI and tickets ($30/45). 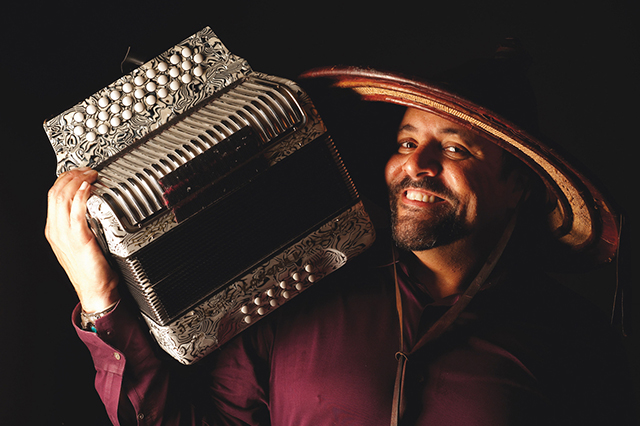 Photo by Michael Weintrob
Terrance Simien and the Zydeco Experience performs Saturday at the Ordway.

Saturday at the Ordway: Terrance Simien and the Zydeco Experience. The two-time Grammy winner and his band have played the New Orleans Jazz & Heritage Festival for more than 30 consecutive years (2018 will be their 33rd). They have performed more than 7,000 concerts and toured millions of miles to over 45 countries. An eighth-generation Louisiana Creole, Simien will raise the roof at the Ordway. 7:30 p.m. FMI and tickets ($27-32). A post-show mingle with the artists follows in the atrium.

Monday at Icehouse: John Raymond & Real Feels “Joy Ride” CD release show. Now teaching at Indiana University after several years in the jazz crucible of New York City, Minnesota-born-and-bred Raymond is out with his trio and their second studio CD. As most music fans know, it’s exciting to follow a young artist as he or she grows and gets better and better, and Raymond is a prime example. “Joy Ride” feels like a giant step, with originals by Raymond, rearranged/reinterpreted covers of songs by Paul Simon, Peter Gabriel, Bob Dylan and Bon Iver (“Minnesota, WI”), and a stirring, surprising version of the hymn “Be Still, My Soul,” because faith isn’t always a smooth ride. With Raymond on flugelhorn, the trumpet’s honey-toned cousin, Gilad Hekselman on guitar and Colin Stranahan on drums. 7:30 p.m. FMI. $15 at the door. Make it a night and stick around for the 9:30 show by Litigation (Davu Seru, Jindra and other guests TBD). FMI. $8.