The huge Broadway hit “Hamilton” is coming to Minneapolis – not for a few days, but for six weeks (more accurately, five and a half). And so is another huge Broadway hit, “Dear Evan Hansen,” making Hennepin Theatre Trust’s 2018-19 Broadway on Hennepin season one of the most exciting in recent memory.

We’ve known that “Hamilton” would show up here sometime this season. Hennepin Theatre Trust put out the first teaser in December 2016, and people have speculated on the dates ever since. But “Dear Evan Hansen” was a surprise. A six-time 2017 Tony winner (including Best Musical and Best Original Score) and 2018 Grammy winner (Best Musical Theater Album), it features a score by “La La Land” composers Benj Pasek and Justin Paul.

In more big news, Tony-winning Broadway legend Betty Buckley will star in the first national tour of “Hello, Dolly!” the Tony-winning Best Musical Revival (April 16-28, 2019). We’ll also see “A Bronx Tale – The New Musical,” based on the semi-autobiographical book by Oscar nominee Chazz Palminteri (“Bullets Over Broadway”), co-directed by Robert De Niro and Jerry Zaks (Feb. 9-24). Rounding out the eight-show season package: Roald Dahl’s “Charlie and the Chocolate Factory” (March 6-17); “On Your Feet!” based on the life and music of Emilio and Gloria Estefan (Jan. 22-27); “Fiddler on the Roof” (July 30-Aug. 4); and “The Play That Goes Wrong” (May 7-12). Like “The Curious Incident of the Dog in the Night-Time,” which came to the Orpheum in December 2016, and “The Humans,” on right now, “The Play” is a play, not a musical.

Current season subscribers can renew now. New season subscriptions are on sale to the public starting today, Wednesday, Feb. 14, at 10 a.m. Buy online, by phone (800-859-7469) or in person at the State Theatre box office and save on fees. Eight-show season packages start at $359 and top out at $1,019. Season subscribers are guaranteed the same seats at locked prices for each show. Tickets for individual productions will go on sale to the general public at later dates TBA. But if you want those “Hamilton” (and “Dear Evan Hansen”) tix, a subscription is the way to go.

Not for new projects or performances, sadly. After laying off its entire staff in late September, the Intermedia Arts board spent just under a month evaluating its financial situation. On Oct. 24, after paying salaried and hourly staff for their final pay period, they announced that its building and long-time home would be sold.

On Monday, the board sent an email stating that “Intermedia Arts, in conjunction with its broker, Nils Snyder of Colliers International, will accept proposals for the purchase of its property at 28th & Lyndale Avenue South in Minneapolis during the time period of February 15-28, 2018. Inquiries regarding a proposal should be directed to Nils Snyder, Nils.Snyder@colliers.com.” 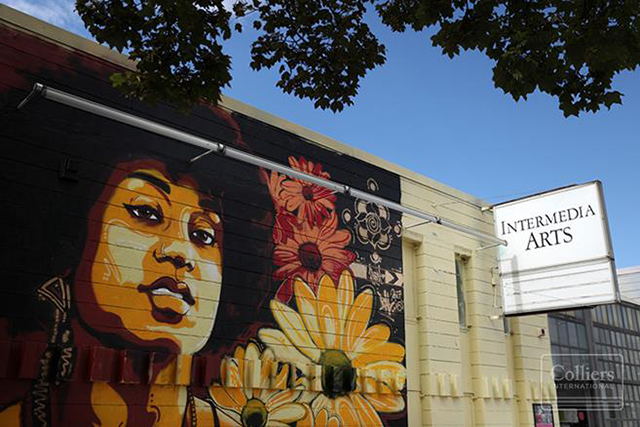 Colliers
Intermedia Arts will accept proposals for the purchase of its property at 28th and Lyndale Avenue South in Minneapolis.

A few bullets from the listing:

And it’s covered with art. By sheer coincidence, two days ago in New York City a federal judge awarded a group of 21 graffiti artists $6.7 million for the destruction of their work by a developer. Their paintings and murals had covered warehouse buildings that were later torn down to make room for an apartment complex. Before the buildings were demolished, the paintings, which had become a tourist attraction, were whitewashed.

Tonight (Wednesday, Feb. 14) at Hamline Midway Library: Fireside Reading Series: Carolyn Porter, “Marcel’s Letters: A Font and the Search for One Man’s Fate.” Proof that a book can come from anywhere. Porter, a graphic designer, was looking for inspiration for a new typeface when she stumbled across letters that would lead her to a Frenchman who worked in a German labor camp in World War II. She wrote a book – and created an award-winning font. With cookies, coffee and a crackling fire. 7 p.m. Free.

Now at the Orpheum: “The Humans.” Stephen Karam’s domestic comedy-drama – not a musical, even though it’s in Hennepin Theatre Trust’s current season – won four 2016 Tonys including Best Play and was roundly hailed as best play of the year. Set during a family Thanksgiving in lower Manhattan, it’s a snapshot of middle-class American anxiety in an age of uncertainty in a world that grows more threatening by the day. The New York Times called it “blisteringly funny, bruisingly sad and altogether wonderful.” The cast includes Emmy winner Richard Thomas (“The Waltons,” “The Americans”), who has also tucked a lot of Broadway plays under his belt. FMI and tickets (start at $29). Through Sunday, Feb. 18. 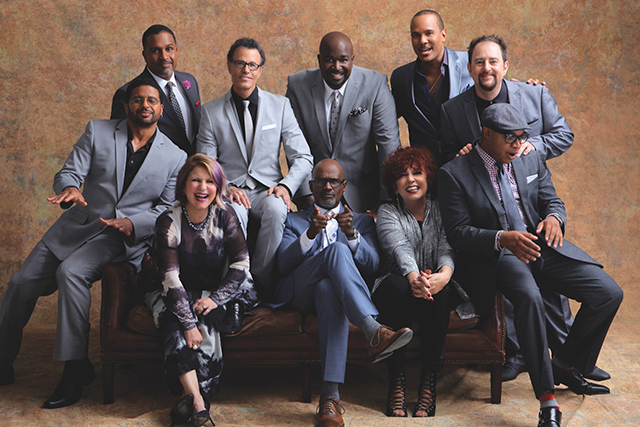 Courtesy of the Ordway
The Manhattan Transfer and Take 6 will perform separately and together Thursday at the Ordway.

Thursday at the Ordway: The Summit: The Manhattan Transfer Meets Take 6. It’s a lot of vocal power on one stage, and years of music and mastery. With 20 Grammys between them, the two supergroups – one a New York-based vocal quartet, the other the most-awarded a cappella gospel group in history – will perform separately and together. 7:30 p.m. FMI and tickets (start at $48).

Friday and Saturday at the Cowles: Contempo Physical Dance: “Vulcão.” Contempo revisits and refreshes a dance work inspired by volcanos, first performed at the Cowles in 2015. A collaboration among choreographer Marciana Silva dos Santos, composer Divanir Antonio Gattamorta and the dancers, it explores parallels between nature and human relationships — and the unique traits of the individual dancers, which dos Santos has investigated and woven in. Contempo is known for its fusion of Afro-Brazilian contemporary dance and the athleticism of its dancers. This should be a night of power and heat. 7:30 p.m. FMI and tickets ($20-28).

Sunday at Orchestra Hall: “VocalEssence Witness: Of Such I Dream.” VocalEssence’s annual WITNESS concert, a tradition begun in 1991, is a regular part of Black History Month and a high point of winter. This year’s concert will feature the debut of the VocalEssence Youth Choir, a group of Twin Cities high school students led by G. Philip Shoultz III. Since 2018 is the 100th year of the Harlem Renaissance, the performance will include the world premiere of composer William Banfield’s chamber symphony “I Trust Harlem Is Still There,” based on the letters of Langston Hughes. Also on the program: the world premiere of Laura Caviani’s “The Dream Cycle.” A multidisciplinary, multimedia experience, the concert is meant to inspire and empower everyone present to become agents of change in their own communities. 4 p.m. FMI and tickets ($10-40).

Westminster Presbyterian Church has a new music venue, and from what we’ve seen (in pictures) and heard, it’s a beauty. Cantus, the men’s vocal ensemble, will give the inaugural concert on Friday, March 2, at 7:30 p.m. A reception will follow. Directions and tickets ($30).