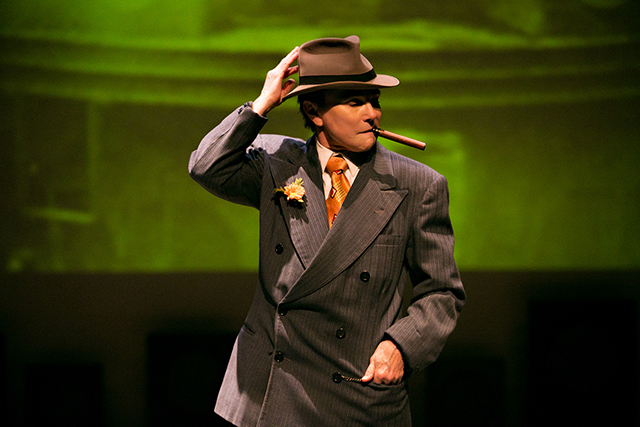 Lauren B Photography
Tovah Feldshuh as Joe “Yussel the Muscle” Jacobs in “Dancing with Giants.”

Do you feel like seeing a play tonight, or a musical? Now is the time. In a quick scan of the Twin Cities Theater Calendar, Minnesota Playlist and a few other places, we count three dozen shows that are up and running. Still more will open this weekend.

February in the Twin Cities is Theater Gone Mad Month.

You could stay home with a beer, your cat and Netflix, but that would be silly. Especially since the long winter freeze seems to be lifting. So here are three shows that deserve to be seen.

‘Dancing with Giants’ at the Illusion Theater

David Feldshuh’s new play is not perfect. Go anyway. It’s a world premiere by the playwright who created “Miss Evers’ Boys,” a Pulitzer Prize finalist that became an HBO movie and won five Emmys. It’s a story most of us don’t know, about the great German boxer Max Schmeling and the brash Jewish boxing promoter Joe Yussel “The Muscle” Jacobs, who were friends in a time when Hitler was coming to power.

The whole cast is strong: Tovah Feldshuh as Yussel, convincing in the cross-gender role; Sam Bardwell as Schmeling, a political pawn who just wants to box; Ricky Morisseau as Joe Louis, young and fast and beautiful; and James Cunningham as a limping, menacing Joseph Goebbels, Hitler’s minister for public enlightenment and propaganda. (“Boxing,” Goebbels declares, “is a weapon of the state.”)

There’s too much history lesson in the telling, but the performances make up for that fixable flaw. Especially Tovah’s. Barbara Portinga dresses her slim, slight form in a way that gives Yussel weight and substance. The character glides more than strides across the stage (movement and choreography by Megan McClellan) but looks solid, like someone who can stand up to fighters and fascists. It’s hard to take your eyes off Tovah, but how often do we get to see her in person, in a theater the size of the Illusion?

Plus she has the play’s best line. Speaking of Germany and Goebbels, Yussel says, “They got a guy over there who’s nuts! He just makes things up to make people crazy!” On opening night, she had to pause while people clapped. FMI and tickets ($25-48). Ends Feb. 24.

‘My Mother Has 4 Noses’ at the Jungle

When we first heard of Jonatha Brooke’s one-woman show about caring for her mother with dementia, we thought the noses were a joke. But Brooke’s mother, Darren Stone Nelson, really had four prosthetic noses, after losing her own to the ravages of untreated cancer.

Nelson was a Christian Scientist. She was also a poet, a clown, an eccentric, a magical thinker and a “serial character looking for a play” whose love for her daughter – she called her “Boolie” – was absolute. That love goes both ways, even when Brooke finds her mother’s excesses embarrassing. When Nelson was failing and in need of care, Brooke stepped out of her own life and into the grind of caregiving. 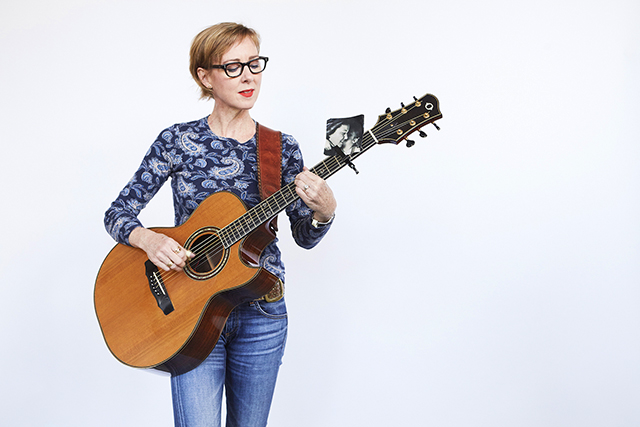 Photo by William Clark
How does Jonatha Brooke do this show without falling apart, then return the next night (or later the same day) and do it again?

Told in stories and original songs (Brooke is a successful folk/pop singer/songwriter with several albums to her credit),“My Mother Has 4 Noses” is heartfelt, frank and incredibly brave. There are moments of humor and gratification, and moments of what Brooke calls “terrible intimacy,” when the child becomes the parent and there’s no room for squeamishness. You can’t help thinking, “OK! I get it! Enough with the poop stories. Let’s move on!”

Brooke stands alone on stage, facing the audience. Two musicians, a cellist and a guitar, are seated behind a screen and out of sight. She plays guitar, piano and kalimba. Her speaking voice is matter-of-fact, her singing voice sweet and supple. She seems both fragile and superhuman. How does she do this show without falling apart, then return the next night (or later the same day) and do it again? Her run at the Jungle is 29 performances. Last week, in the lobby after a show, she said that no two performances are the same, and different parts hit her on different nights.

“My Mother Has 4 Noses” is deeply personal – to Brooke and to those in the audience who are dealing with parents in failing health. But it’s never saccharine, nor does it manipulate our emotions. Still, if you go, grab a free pack of Kleenex at the bar on the way to your seat. FMI and tickets ($32-47). Ends March 4.

‘Assassins’ at the Ritz

Or are they? Rothstein hopes we’ll see them differently – as human beings. Not so we can emulate them, but so we can empathize with them. That way lies greater understanding and a way out of the mess we’re in.

What he’s asking isn’t easy. “Assassins” is a bleak piece of work, with moments of dark humor. The setting is a carnival, but not one you’d take the kids to. There’s a lot of shooting. (The guns are all nonfunctional, the sounds recorded but loud.) The characters aren’t attractive. They’re angry. They feel betrayed. They haven ‘t gotten what they think they deserve, whether it’s an ambassadorship to France (Guiteau) or Jodie Foster’s attention (Hinckley). Nine men and women from different backgrounds and circumstances come up with the same solution to their problems: Let’s kill a president! 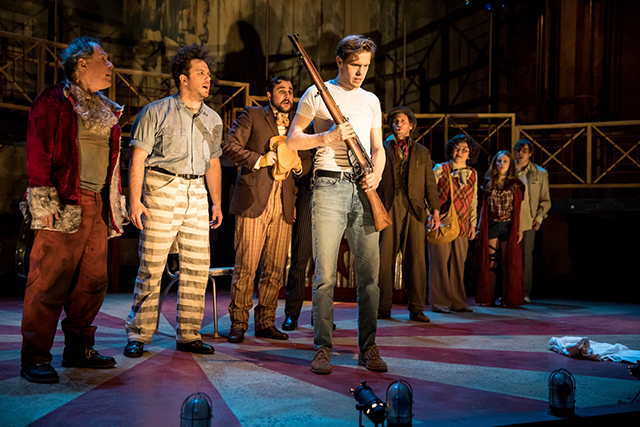 “Everybody’s got the right to be happy/Everybody’s got the right to their dream,” goes the first song. Irony, or a comment on how empty those promises have become? “Attention must be paid,” says Booth to Oswald later, quoting “Death of a Salesman” as he urges Oswald to shoot Kennedy. Booth hated Lincoln because he thought Lincoln had ruined the nation. He believed that America would understand why he killed Lincoln and thank him for it. As Booth, Dieter Bierbrauer is charismatic and almost convincing.

Rothstein, who’s working his way through Sondheim (this is Latté Da’s sixth Sondheim musical), wanted to produce “Assassins” sooner but waited. He wouldn’t do it when Obama was president. Today, he writes in the program notes, “no matter where you stand politically, the anger, hatred, and violence surrounding the presidency is unlike anything I’ve witnessed.”

“Assassins” is a terrific production, as we’ve come to expect from Rothstein and Latté Da, who are spoiling us with great musical theater. It will leave you with much to think about and puzzle through, with no easy answers or tidy conclusions. If you arrive early, you can take part in carnival games on the stage, with the actors in costume. A surreal start to a memorable evening. FMI and tickets ($29-49). Ends March 18.