Who says women in theater can’t do it all? Sally Wingert, the best-known actress in the Twin Cities, directed a play at the Minnesota Jewish Theatre Company in 2017. Sara Marsh, founder and artistic director of Dark & Stormy Productions, performs in all of the company’s plays; when her director had to drop out of “The Maids” earlier this year, Marsh took on that role, too. Which included directing herself. Austene Van splits her time between acting and directing; Pillsbury House Co-Artistic Producing Director Faye Price does both.

Angela Timberman, who has graced many Twin Cities stages and recently had a hit with a one-woman Fringe show about a State Fair pickle, is about to lead her third production for Artistry, the theater in the Bloomington Arts Center. She’ll direct the musical “Legally Blonde,” which opens the 2018-19 season in the center’s Schneider Theater on Sept. 16.

Based on Amanda Brown’s novel and the hit movie starring Reese Witherspoon, “Legally Blonde” is the first of four musicals in Artistry’s new season. Opening Oct. 7: “Mary Poppins,” with a book by Julian Fellowes (“Downton Abbey” etc.), new songs, and choreography by Joe Chvala. Joel Sass will direct and do the scenic design. Opening Jan. 26, 2019: “She Loves Me,” the evergreen romance with music by Jerry Bock and Sheldon Harnick of “Fiddler on the Roof” fame. Artistry’s Benjamin McGovern will direct. Opening April 5: “Victor/Victoria,” with music by Henry Mancini, about a woman who sings and becomes a woman who pretends to be a man who pretends to be a woman who sings. Will they cast a Julie Andrews-type in the title role?

Two nonmusicals in the Black Box will round out the season. Starting Sept. 16: Clifford Odets’ “Awake and Sing!” directed by McGovern. And opening May 5, 2019, the regional premiere of Mat Smart’s “Tinker to Evers to Chance,” a play about baseball and hope, directed by Brian Balcom.

See it before it’s gone: CraftBOWL

As a gallery space, the American Swedish Institute is a sprawling, multilevel blend of traditional and modern, old and new. A Gilded Age castle linked to a sleek, contemporary addition by a ground-level skyway, it’s worth visiting for the buildings alone. And FIKA, its deservedly popular café. And a thoughtfully curated museum shop.

And then there are the exhibits, which can range from fashions inspired by the Nobel Prize to elaborate wood carvings, textiles, giant-size watercolors, kitschy birch plaques, exquisite glass installations, cut paper, pastels by local artists, large-scale paintings, photographs of Syrian refugee children, Swedish folk costumes – almost anything. CraftBOWL, which closes April 8, is really four shows in one, related by ASI’s 2018 theme, “The Handmade.” It opened Jan. 19, so the full-caps BOWL was a nod to the 2018 Superbowl, but only a nod, because much of the exhibit is really, truly about bowls.

Start in the Osher Gallery in the ASI’s Nelson Cultural Center with a show called “101 Bowls.” It’s a zillion times more interesting than it sounds. The bowls are from the ASI’s own collection, other museums and many private collections, and each has a story to tell. The stories are told on labels and written in the first person, as if the bowls are speaking to you. There’s a bowl that held a couple’s rings on their wedding day. A bowl built from paintings by residents of the Ebenezer Lifelong Learning program, a retirement community that shares the Phillips neighborhood with ASI. A ceremonial bowl borrowed from the Somali Museum. A samovar borrowed from the Museum of Russian Art. A trophy bowl awarded to a Swedish immigrant who won the Boston Marathon in 1913. A carved and painted ale bowl shaped like a rooster. Skol to that! (“Skol,” btw, means “bowl.”) Bowls are ceramic, wood, glass, metal, fiber, crystal, leather and paper. They’re plain and fancy, small and large. It’s a fascinating show. 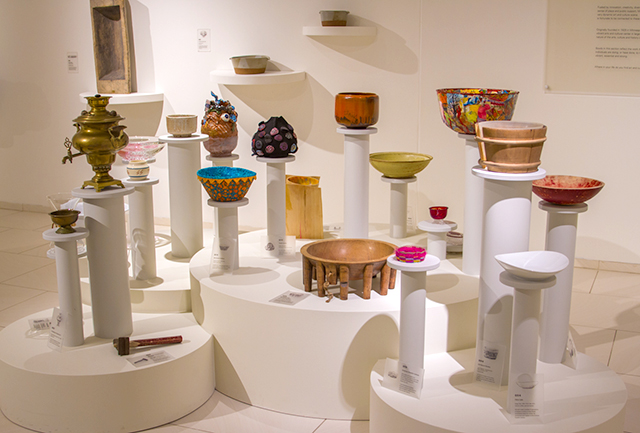 MinnPost photo by John Whiting
A selection from “101 Bowls” in the Osher Gallery in the ASI’s Nelson Cultural Center.

And it’s just a start. Three more related shows in the Castle (more properly, the Turnblad Mansion) are revelations in their own ways. The absolute must-see: “Rites of Passage,” an installation by world-renowned Swedish glass master Bertil Vallien. Presented in collaboration with Sweden’s Glass Factory, this is the first time such a large and diverse body of Vallien’s work has appeared in the United States. Spanning the early 1960s to the present day, it explores Vallien’s obsession with boats, bridges, portals, paths, and the stages of life. He calls his bowls “story bowls.” You’ll want to look at each one from every possible angle. They’re layered with symbolism. And his boats are dreamy, mystical masterpieces.

There’s an exhibit by Ingegerd Råman, a Swedish National Treasure. Her work is simple and functional – just perfectly shaped, eminently useful bowls, cups, glasses and vessels. And a show by Swedish woodcarving artist Jögge Sundqvist of trays, boxes, sculptures, shelves and spoons. You’ll want to take one home. Actually, you can; all are available for purchase.

Tonight (Friday, March 30) at Jazz Central: Michelle Kinney’s What We Have Here. What does “what we have here” mean? Some would quote “Cool Hand Luke”: “What we have here is failure to communicate.” But this will be all about communication. The night will include original compositions by cellist Kinney (of Jelloslave) plus new arrangements of songs by Bon Iver and Chastity Brown, performed by a stellar assemblage: Pat O’Keefe on clarinet and saxophone, Laura Harada on violin, Noah Ophoven Baldwin on cornet, Greg Schutte on drums, Adam Zahller on voice, and special guests Ivan and Chris Cunningham. 8 p.m. $10 at the door, $5 with student ID.

Friday and Saturday at the Dakota: Debbie Duncan: “Full Circle” Album Release. The Twin Cities’ “First Lady of Song,” Duncan recorded her first live album at the old Dakota in Bandana Square in 1993. She recorded her second at the “new” Dakota on Nicollet Mall last August. (New in quotes because the Dakota has been in its current location for 15 years.) Come celebrate an extraordinary artist who can sing anything and mean every word. Debbie is special. 7 p.m. FMI and tickets ($25). 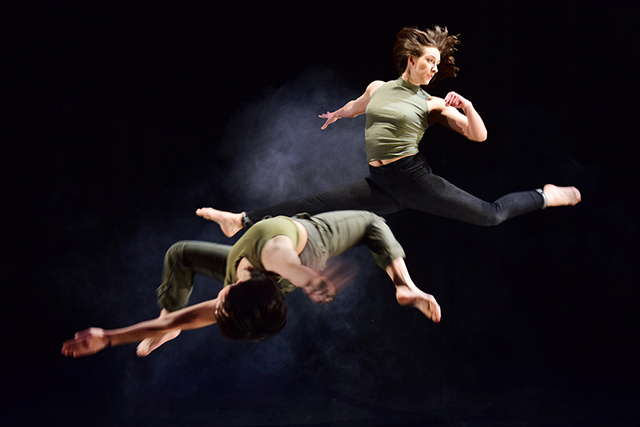 Friday and Saturday at the Cowles Center: Shapiro & Smith Dance: “Later that night.” The company’s 31st season features the world premiere of “Later that night” with Laura Selle Virtucio and Andrew Lester. Just the two of them, dancing about a small event that leads to something else, and something else. The program also includes the 2016 hit “Hands,” with text by Brian Sostek; “A Naked Man’s Shirt,” an examination of power and competition; and Smith’s signature “Bolero,” performed by 18 women. 8 p.m. FMI and tickets ($29).

Saturday at TPT: “Art Is … Awakening.” The second of four live events in TPT’s streetspace spotlighting work by three emerging artists. Leila Awadallah will begin with a movement act about her relationship with her father. Essma Imady will present a body-projection of film interviews of Syrian children refugees. Ifrah Mansour will close the evening with a performance. All ages. Doors at 7 p.m., show at 7:30. FMI and tickets ($5).