A coming-of-age opera about a transgender woman is currently the hottest opera in the country. Since premiering in New York City in 2014, “As One” has been produced 17 times, with more productions on the way. In January, the blog of American Opera Projects, the commissioning organization, reported that “As One” had surpassed Puccini’s “Turandot” and Rossini’s “The Barber of Seville” to become the 14th-most-produced opera in the U.S. and Canada in 2016-17.

Reviews have been effusive: “A rich addition to the repertoire.” “Artistically distinguished, socially important.” “Winning humor and a satisfying emotional arc.” “A piece that haunts and challenges its audience with questions about identity, authenticity, compassion and the human desire for self-love and peace.”

Robert Neu, artistic director of Skylark Opera Theatre, saw Opera Colorado’s production in Denver in March 2017 and couldn’t wait to bring it to the Twin Cities. It opens Friday at the North Garden Theatre, a renovated former movie house on West Seventh in St. Paul. “It’s a really important, wonderful work,” he said by phone earlier this week. “If you’re in the business at all, you’re aware of it. Everyone has decided to do it. It’s been done all over the country.”

But why? “It’s so timely. With all that’s been happening politically with human rights and human equality, an opera about a transgender person is fascinating in and of itself. It has this unique treatment of two actors playing one character. It’s an hour and 20 minutes, and it’s in English, and it’s accompanied by a string quartet.

“For Skylark, now that we’re in the business of small pieces and chamber operas, this had our name written all over it. And then you see and hear the piece, and musically it’s accessible. The way the story is told is beautiful. It has humor and charm, and it’s very moving. It just had every component for me.” 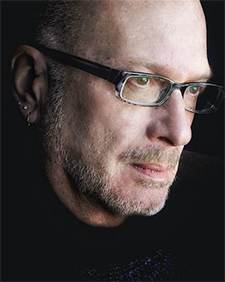 “As One” was conceived and composed by Laura Kaminsky, who saw a film by transgender filmmaker Kimberly Reed called “Prodigal Sons,” about the experience of being a trans person and telling that story. The libretto was written by Mark Campbell and Reed.

The San Diego Tribune dubbed Campbell “America’s hottest and most prolific opera librettist.” Minnesota Opera fans know him as the librettist for “Silent Night” (the one that won the Pulitzer), “The Shining,” “The Manchurian Candidate,” “Memory Boy” and “Dinner at Eight.” He’s currently writing the libretto for the new Minnesota Opera commission based on Kate DiCamillo’s “The Miraculous Journey of Edward Tulane.”

“As One” has a cast of two, a baritone and a mezzo-soprano who play “Hannah before” (a man) and “Hannah after” (a woman). Both are on stage the whole time.  Our baritone is Luke Williams, director of opera at the University of Central Missouri and an in-demand performer; our mezzo is Bergen Baker, a former Minnesota Opera teaching artist who has performed with Minnesota Opera, Minnesota Orchestra, Skylark and Florentine Opera.

Neu is director. His wish: that people give “As One” a chance. “I worry that people are going to have the reaction that so many people do: ‘It’s contemporary. It’s going to be hard to listen to. I don’t think I’m going to like it.’ I hope people will be open-minded,” he said. “This is the time to support something in the arts that’s making a statement about equality and inclusivity. This is a time when we’re trying to bring women to the forefront for their contributions. Kaminsky is a female composer – a female opera composer, which is a pretty rare thing. …

“There was a period when a lot of contemporary stuff was thorny and difficult. Stuff today is much more melodic and tonal. If you come to support ‘As One’ in concept, you’re going to leave having loved it and been touched by it. … It is the kind of piece that brings tears.”

“As One” opens tonight at the North Garden Theater. It runs for six performances and closes on March 25. FMI, times, and tickets ($35-39).

Tonight at Thompson County Park – Dakota Lodge: Club Book: Laura Lippman. The New York Times best-selling author of the “Tess Monaghan” series is out with her latest non-Tess book, “Sunburn.” This noirish psychological thriller was one of the most highly anticipated books of 2018. Hosted by the Dakota County Library. 7 p.m. FMI. Free. Can’t be there in person? A podcast will be available in just a few days.

Tonight at the Black Dog: Rain Taxi presents Peter Stenson. The author of “Fiend” (“Best zombie book, ever” — SF Signal; “ ‘Shaun of the Dead’ meets ‘Trainspotting’ ” —MTV.com) is back with his second novel, “Thirty-Seven,” about the sole survivor of a group known as The Survivors. Sounds deliciously dark and intense. Now we want to read him. 7 p.m. FMI. Free. 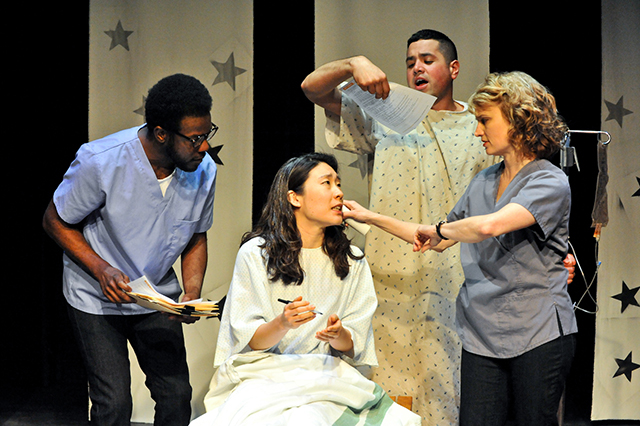 Photo by George Byron Griffiths
Left to right: Mikell Sapp, Audrey Park, Ricardo Vázquez and Tracey Maloney in a scene from “The Great Divide: Plays for a Broken Nation.”

Starts tonight at the Guthrie: Mike Daisey: “A People’s History.” Monologist, author and solo performer Daisey was last at the Guthrie in August 2016 with “The Trump Card.” He’s back with a show we’ll see here first, and you might want to pack in as many performances as you can, because each one will be totally different. Daisey will make his way through Howard Zinn’s best-selling “A People’s History of the United States,” contrasting that with the history he grew up learning from a traditional textbook. He’ll spin a new monologue at every 90-minute show, and he’ll do it 18 times. 7:30 p.m. FMI and tickets ($9). Closes Saturday, March 31.

Friday at the Resonance Box: “Mirrorlands.” Ooh, new venue. “A creative space dedicated to the exploration and presentation of the auditory experience.” And small. Friday’s event features contemporary Persian music and other forms, with Jacqueline Ultan on cello; Tim O’Keefe on percussion, oud and duduk; Saeed Hashemi on Setar; and vocalist Aida Shahghasemi. Art by David Bartley will be projected behind the musicians as they play. 40 seats only. 7 p.m. FMI and tickets ($20). The Resonance Box is also hosting a video project by Ultan called “Conversations with Nature,” inspired by the visuals and acoustics of the South Dakota Badlands.

Sunday at the Sabes JCC: Rimon Artists Salon: “A Life in Transit: Immigration Through an Artist’s Lens.” The plight of immigrants is one of the defining stories of our times. On Thursday (March 15), a show called “Im/migration and The Other” will open at the Sabes JCC featuring paintings and photographs of local immigrants and refugees. The work is by Twin Cities artists Pamela Gaard, Steve Ozone and Susan Weinberg. On Sunday, the Rimon Artists Salon will host a conversation with Ozone and Weinberg that explores how Americans see and hear the immigrants in our midst, and perhaps how they see us. Photographer Linda Brooks will moderate. 2 p.m. Reservations here ($12/6 ages 36 and under); 952-381-3449. “Im/migration” closes April 26 with a reception from 6-8 p.m.

Skylark to stage transgender opera ‘As One’; ‘A People’s History’ at the Guthrie