The acclaimed Swedish clarinetist and conductor Martin Fröst is back in the Twin Cities. He’s here for his annual visit as a St. Paul Chamber Orchestra artistic partner. Last weekend, they performed Mozart’s Clarinet Concerto and Symphony No. 39, a program that repeats Thursday.

Starting Friday, they’ll set aside the Clarinet Concerto for three world premieres. One is a collaboration between Fröst and his violist brother Göran. One is a work by Swedish composer Jesper Nordin, who invented an app that lets Fröst create and control sound using physical gestures. The third is a very short work for chamber orchestra by 26-year-old Swedish composer Jacob Mühlrad.

Mühlrad started playing piano at 14 and struggled with dyslexia in school. “It makes it incredibly hard for me to read and write, and of course, read and write music,” he said during a 2013 TEDx talk. (Yes, he’s already done a TEDx talk.) “Later on, I came up with this great idea to become a composer, where basically everything is about reading and writing.” He calls musical notes “teardrop signs.” Dyslexia hasn’t held him back; we dare anything or anyone to try.

While still in school, Mühlrad received his first commission at 19, from the Royal Swedish Opera. More commissions have followed. His music has been performed in Stockholm, at New York’s Carnegie Hall and the National Portrait Gallery in London. His choral piece “Nigun,” inspired by the Jewish liturgy, has been sung by the Swedish Radio Choir. The world premiere of “Kaddish,” a work for solo voice and choir bearing witness to the Holocaust (his grandfather survived Auschwitz and Bergen-Belsen), was attended by the Swedish royal family. You can hear several of Mühlrad’s compositions on his YouTube channel and SoundCloud station.

He’s a young composer of the 21st century. So he’s also working with Swedish rapper Silvana Imam on something new. He listens to Arcade Fire and Kendrick Lamar. He once told an interviewer, “There are no hard and fast rules about what music should sound like. There are unwritten rules and they are dangerous.”

The piece that premieres this weekend, “Angelus Novus” (New Angel), was inspired by Paul Klee’s monoprint of the same name. Created in 1920, it, too, survived the Holocaust, passed from hand to hand before entering the collection of the Israel Museum in Jerusalem in 1982. This is not the heavenly creature most of us imagine when we think of angels. Klee’s angel looks haunted, desperate, frazzled. Its first owner, German Jewish philosopher Walter Benjamin, dubbed it the Angel of History. He saw it as facing the past, seeing only catastrophe.

We spoke with Mühlrad over email earlier this week. 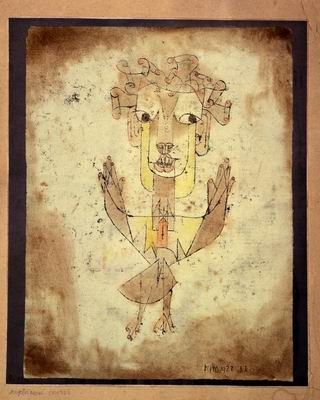 MinnPost: I read that your “Angelus Novus” is only three minutes long. Is that true?

Jacob Mühlrad: Actually, the piece is four minutes, quite unusual for being an orchestral piece of music.

MP: Did Martin Fröst ask you to write it?

JM: Yes. Martin reached out to me and asked for a meeting late last summer. We had met on different occasions before, but I understood that this was something different. We had an instant understanding for each other’s work, and shortly thereafter he commissioned the piece from me.

MP: Did he give you any guidance? Or were you free to find your own inspiration and make your own decisions?

JM: Martin had the word “Retrotopia” as a starting point. [Note: “Retrotopia” is the final part of a multiyear project by Fröst and the Royal Stockholm Philharmonic Orchestra.] I find the art of Paul Klee to be very interesting. When I saw that one of his works, “Angelus Novus,” was connected to Walter Benjamin’s text that is being used in the book “Retrotopia” by Zygmunt Bauman, everything fell into place.

MP: Your “Angelus Novus” is about as long as a pop song. Yet your description on the SPCO’s website sounds like it’s personal. It draws from your Judaism and Bach’s Toccata and Fugue in D minor. Both were important to you when you were a child. It pairs modern art with modern music, something you’ve said you want to do as a way to make art music more accessible. How did you squeeze so much into such a short piece?

JM: Yes, the density of the piece is extremely high [compared to] the length, something that is also reflected in the instrumentation. I think you are right when you say that the content of the piece is very personal. [It has] the Toccata and Fugue, which opened my ears to classical/art music, and also the Torah melodies that I sung as a child in the synagogue. Fragments of these melodies, as well of Bach’s work, can be found in my piece.

MP: What does Klee’s “Angelus Novus” mean to you?

JM: It means a lot, really. The Talmudic angel is pointing both back in time and forward and I really like the mysterious, esoteric expression. But for me, the most interesting thing about the artwork is how the angel’s wings are grand but inadequate. You get the notion that he is trapped between forward and backward motion. I think it attaches itself in a very intricate way to the theme of “Retrotopia.”

MP: Do you think the angel would like the music you wrote?

JM: Haha. My guess is that he/she certainly would recognize the trop melodies from the Torah which I have implemented in the piece. [Note: Trop, or trope, or cantillation, is a system of music-like notation used for reading the Torah and other sacred texts aloud.]

MP: What else do you want people to know about your “Angelus Novus” before they hear it?

JM: I just want them to listen to it with open ears and open hearts.

MP: Are you coming to Minnesota for your world premiere?

JM: Yes. If everything goes as planned, I will be landing in Minnesota on the seventh of March. I’m very much looking forward to the premiere. It will be a great honor for me to hear the St. Paul Chamber Orchestra play my music.

“Martin Fröst and Mozart’s 39th Symphony”: Open rehearsal Friday at 10 a.m., concerts Friday and Saturday at 8 p.m. All at the Ordway Concert Hall. FMI and tickets ($10 open rehearsal, $12-50 concert). Children and students get in free.