Two operas opened over the weekend in St. Paul. One is large, the other small. One dates from 1851, the other from 2014. One has a cast of 41 and a full orchestra, the other a cast of two and a string quartet. One is a tragedy, the other a self-love story. Both are immediate and urgent.

At the Ordway, Verdi’s “Rigoletto” is being presented in a new Minnesota Opera production with a point of view. Director Austin Regan, making his Minnesota Opera debut, has set it “now, or a time much like now” in “a totalitarian country under the absolute rule of the Duke.”

The Duke spends his days and nights seducing women. His enormous, self-aggrandizing portraits hang everywhere, along with vaguely Nazi-like symbols. A large male chorus doubles as a complicit gang of enablers and kidnappers. Rather than follow tradition and make the jester Rigoletto a hunchback, Regan has put him in an awkward leg brace. The chorus does its dirty work wearing creepy glowing masks. Sparafucile, an assassin, might have stepped out of the sci-fi film “Dark City.” The set includes a wall of security cameras and another of windows through which characters surveil each other.

“Rigoletto” is sufficiently grim and hopeless set in the 16th century, Verdi’s original time period. Do we need it to comment so bluntly on the present day? On the other hand, Regan’s interpretation may be a way in for those who haven’t yet seen Verdi’s masterpiece. It should be seen, and definitely heard. The story is heartbreaking: Rigoletto is mocked and fatally cursed, his beloved daughter is raped and murdered, and the Duke gets off scot-free. The music is stupendous. Though we have reservations about the staging – and btw, this isn’t a review, because we saw the final dress, not an actual performance – the singing is exquisite.

Icelandic baritone Olafur Sigurdarson, making his Minnesota Opera debut, is magnificent as Rigoletto. So is soprano Marie-Eve Munger as Gilda, her liquid soprano hitting all the high notes Verdi demands. As the Duke, tenor Joshua Dennis, who returns to the Ordway after singing Romeo in 2016, is so charming you almost forget he’s despicable. When he sings “La donna è mobile,” the sweetest-sounding, most famous aria in “Rigoletto” (and one of the most famous in opera, period), he’s calling all women liars. At least he’s not tweeting it.

Minnesota Opera’s “Rigoletto” continues at the Ordway through Saturday, March 31. FMI and tickets ($25-220). These will be conductor Michael Christie’s final dates as Minnesota Opera’s music director.

We saw Skylark Opera Theatre’s “As One” on opening night at the North Garden Theater, a recently renovated space on West Seventh St. A coming-of-age tale of a transgender woman, told without mention of the word transgender, it’s a ringingly, fundamentally human story whose central question couldn’t be simpler: Don’t we all deserve to be ourselves? With transgender issues in the headlines – which bathrooms should trans people use? Should they be allowed to serve in the military? – “As One” steps away from the politics and the shouting to say, “Hi, meet Hannah.”

Born in a man’s body, Hannah is a woman. She discovers early that she’s not like other boys. Her handwriting is girly. She wants to wear women’s clothes. During sex education classes, she longs to be in the room with the girls, learning about girl stuff. When she stumbles across the word for what she is, she heads to the library to learn more, hiding her research behind books about the Transvaal War. 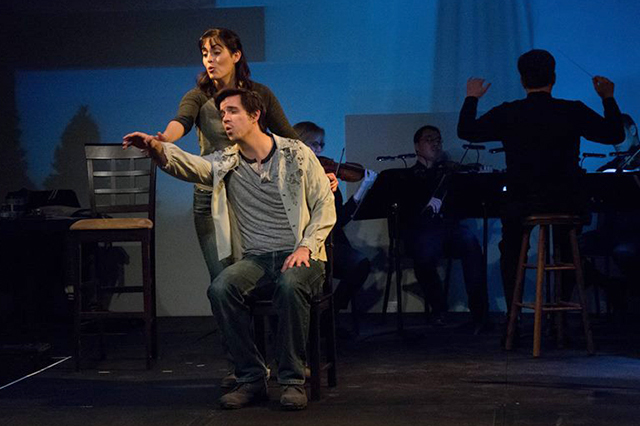 Photo by Matt Bellin
Luke Williams and Bergen Baker in a scene from “As One.”

Directed by Robert Neu, this is opera on the most intimate scale. Hannah is played by two characters, bass-baritone Luke Williams as “Hannah before” and mezzo-soprano Bergen Baker as “Hannah after.” Both are on stage the whole time. They face each other, stand near each other, and embrace each other. They’re splendid singers who bring passion and commitment to their roles. How do you play half a person? How do you become the other?

Performed by a string quartet led by Jeffrey Stirling, also on stage the whole time, the music, a cycle of 15 songs, is by contemporary American composer Laura Kaminsky. The words are by Mark Campbell and Kimberly Reed. Reed is a trans woman filmmaker on whose life “As One” is based. She also created the projections that appear on the wall behind the singers to define times and places. Campbell is a brilliant, in-demand librettist who tells complex stories set to music in conversational language. A sample from a key moment:

“As One” isn’t all self-discovery and enlightenment. There’s a wrenching song about a narrow escape, punctuated with the names of real trans people who died violently just because they were trans. The opera is in three parts: Hannah as a child, Hannah in college, and Hannah in Norway, where she completes her search for herself. The Norway part is a bit puzzling. Why Norway? What if you’re a trans person and you don’t have the option to spend time in a cabin in Norway, making jam and riding around in a boat and sorting things out? But that’s where the story goes, and we go along.

It’s easy to see why “As One” is so successful. The music is modern, but not thorny or intimidating. It pairs perfectly with the words, and together they carry you through the story. You don’t have to work to enjoy it. The opera has a message, but it’s never preachy. It has an open heart and a warm, generous spirit. In Skylark’s production, Williams and Baker are enormously appealing; under Neu’s direction, they become one character, something that sounds dubious when you first hear about it.

Skylark will hold a post-show discussion after each performance with Neu, Williams, Baker, and one or more guests. Most people stayed on opening night. Kaminsky was there, and Ellen Krug, a transgender activist, author and lawyer. “As One” was Krug’s first opera. She loved its humor, authenticity and language, which to her felt “right on the money.” Earlier that day, someone at Caribou had called her “Miss.”

Skylark Opera Theatre’s “As One” continues at the North Garden through March 25. FMI and tickets ($35-39). The North Garden is kind of like the Lab Theater in Minneapolis, except smaller and above ground. Here’s our interview with Neu, if you missed it last week.

Two very different operas open in St. Paul: ‘Rigoletto’ and ‘As One’