One big surprise of the Minnesota Orchestra’s 2018-19 season, announced today, takes place in January. Yes, January. Following a January 2016 Beethoven marathon and a January 2018 Tchaikovsky marathon, Osmo Vänskä and his band will ring in 2019 with music by Leonard Bernstein, Aaron Copland and George Gershwin, launching an almost-three-weeks-long American Expressions Festival.

From New Year’s Eve through January 18, 2019, the orchestra will play exclusively music by American composers. Along with the three just mentioned, they will include Pulitzer Prize winner John Harbison (the season’s featured composer), Stephen Paulus, Samuel Barber, Artie Shaw, Howard Hanson, William Schuman, Steve Heitzeg – and Florence Price, the first African American woman to have her music played by a major symphony orchestra. They will also include the yet-to-be-chosen composers of the Future Classics concert on Jan. 18, who must all be U.S. residents.

From Jan. 3-6, Sarah Hicks will lead the orchestra in John Williams’ score to “Star Wars: A New Hope” while the film shows on a large screen. These are Live at Orchestra Hall events, not classical subscription concerts, but Williams is an American composer, too.

Music by American composers will be heard throughout the new season. John Adams, Mason Bates, Geoffrey Gordon, Kevin Puts, Kareem Roustom, Sean Shepherd and Billy Strayhorn have all been programmed.

But the biggest surprise is the number of American women whose work will be featured. So many women! Not only Price but also Joan Tower, whose “Fanfare for the Uncommon Woman: No. 1” will open the new season. And Amy Beach (“Gaelic” Symphony), Jennifer Higdon (“blue cathedral”), Libby Larsen (“Symphony: Water Music”), Missy Mazzoli (“These Worlds in Us”) and Pauline Oliveros (“Dissolving Your Earplugs”).

It feels as if a corner has been turned and things will never be the same.

The season will begin Sept. 21 and officially end June 15, although a Live at Orchestra Hall concert (of Beatles music, how perfect is that for summer?) is set for June 22. (Sommerfest will start July 13.) Over nine months, the orchestra (and small ensembles, for the intimate Chamber Music series) will perform almost 90 times. Thirteen works will be new to the orchestra, including a world premiere and two U.S. premieres. A parade of internationally acclaimed soloists will include Gil Shaham, Emanuel Ax, Stephen Hough, Michael Collins, Colin Currie, Eric Owens and twin sisters Christine Naughton and Michelle Naughton. Among the 14 guest conductors, in addition to Glover and Wang, will be former Minnesota Orchestra music director Edo de Waart.

The 23 weeks of classical subscription concerts will include symphonies and concertos by Beethoven, Bizet, Brahms, Bruckner, Haydn, Mozart, Prokofiev, Schubert, Schumann, Shostakovich, Vivaldi and other composers in the canon. We’ll hear Holst’s “The Planets” (where the chorus will be the women of the Minnesota Chorale), Verdi’s “Requiem” and the final three cantatas of Bach’s “Christmas Oratorio.” Vänskä will conduct Mahler’s Seventh and Tenth Symphonies before recording them with the Swedish label BIS as part of the Mahler Symphonies recording project. (The orchestra’s “Mahler 5” was a 2018 Grammy nominee; “Mahler 6” is about to be released; “Mahler 2” was recorded in June 2017 for future release; “Mahler 1” will be recorded next week.)

There are more surprises to come. Like a concert celebrating Northrop’s restored pipe organ – at Northrop, led by Vänskä, with the world premiere of Harbison’s concerto “What Do We Make of Bach?” An Inside the Classics concert of works by LGBTQ composers. Superstar jazz vocalist Gregory Porter singing the music of Nat “King” Cole, with Vincent Mendoza at the podium. Jazz pianist Aaron Diehl making his Minnesota Orchestra debut on New Year’s Eve with Gershwin’s “Rhapsody in Blue.” Dessa performing music from her new album, “Chime,” in another sure-to-sell-out collaboration with the orchestra.

See it before it’s gone: “Pirates of Penzance” at the Park Square. It’s not a purist’s “Pirate,” but this new adaptation is the very model of a modern comic opera. Created by director Doug Scholz Carlson, Bradley Greenwald and other members of the cast, it reframes the original as a play-within-a-play. Gilbert (Zach Garcia) and Sullivan (Greenwald) are en route to America via ship to stage a new production when Sullivan discovers he’s left the music in London. They must rewrite it on the way. This allows for a few liberties in tune with today’s sensibilities, such as the addition of lines like “Nevertheless, she persisted.” The usual “Pirates” production has 10 main characters, plus a large chorus of pirates, police, General Stanley’s daughters, chaperones and servants; Park Square does it all with a cast of nine. The orchestra is three musicians. In a stroke of genius, the ever-luminous Christina Baldwin is cast as Helen Lenoir (in real life, Lenoir produced all of the G&S operas) and also as the Major General and the Sergeant of Police. So it’s she who gets to sing the tongue-twisting, patterific “Major-General’s Song.” This is so much fun, and deliciously silly, and all beautifully sung. Ends Sunday, March 25. FMI including times and tickets ($25-60). 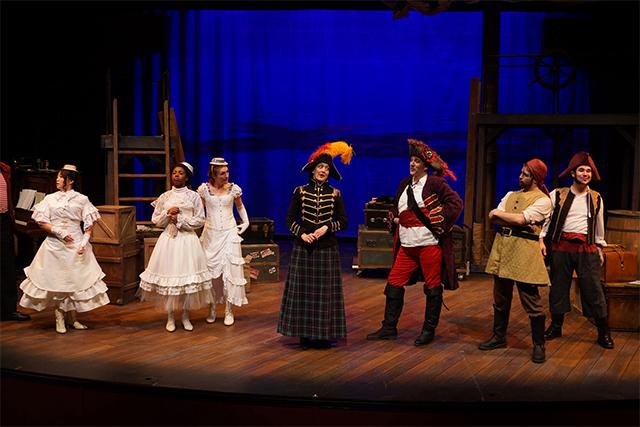 Tonight (Friday, March 16) at the Film Society’s St. Anthony Main Theatre: “The Experimental City.” Did you know that 55,000 acres in Aitkin County, Minnesota, were once eyed as the site of a futuristic Minnesota city? Filmmaker Chad Friedrichs tells the fascinating true story of the Experimental City, conceived in the 1960s by Athelstan Spilhaus, engineer, scientist, optimist, dreamer, and author of the Minneapolis Sunday Tribune color comic “Our New Age.” With people like Tribune publisher Otto Silha in his corner, along with Buckminster Fuller, Hubert Humphrey, National Urban League executive director Whitney Young and a four-star general, Spilhaus almost made a go of his idea. Both the city of Jonathan and Victor Gruen’s original plan for Southdale pale beside this tale. Tonight’s screening will include an opening night panel with Freidrichs, the Star Tribune’s James Lileks and Minnesota Historical Society curator Brian Horrigan. 7 p.m. FMI including trailer, times and tickets. Through Thursday, March 22. 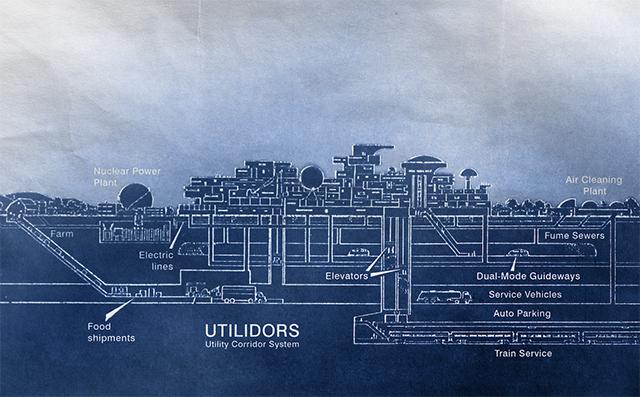 An image from ‘Experimental City,’ a documentary film by Chad Freidrichs

Tonight at the Capri: SPCO Chamber Music Series @ the Capri: “Strong Sisters.” The St. Paul Chamber Orchestra celebrates four female composers with a program of music by Nadia and Lili Boulanger, Dame Gillian Whitehead and Amy Beach. 7 p.m. Free; register here. This concert will also be performed Saturday (8 p.m.) and Sunday (2 p.m.) at the Center for the Performing Arts at St. Paul Academy and Summit School. FMI and tickets ($15 adults, children and students free). Repeat: the concert at the Capri is free.

Saturday in churches all over St. Paul: Before Bach’s Birthday Bash. Five free hourlong performances of works by J.S. Bach (and one of his sons, W.F.). Performers are members of friends of the Twin Cities chapter of the American Guild of Organists (TCAGO) and the University of Minnesota School of Music. 9 a.m. at Olivet Congregational Church, 10:30 a.m. at St. Mark Catholic Church, 1 p.m. at St. Clement’s Episcopal Church, 2:30 p.m. at St. Paul’s United Church of Christ and 4 p.m. at House of Hope Presbyterian Church. The first concert will be broadcast live statewide on the network stations of classical MPR. FMI, go here and click on Full Program (PDF). Repeat: Free. 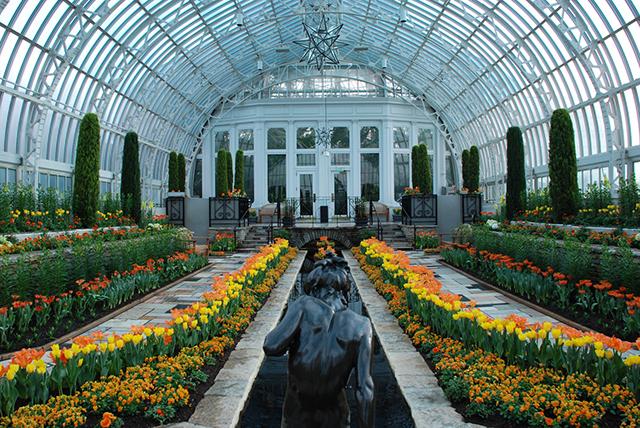 Opens Saturday at Como Park Zoo and Conservatory: Spring Flower Show. Just in time to keep us all from going completely bats with winter, the Conservatory will bloom with tulips, daffodils, hydrangea, hyacinth, Asiatic lilies, calla and crocus. See the flowers, smell the flowers, feel that lovely humidity soak into your skin. 10 a.m.-4 p.m. daily. Free.