Not long ago, a gray fox lived in our southwest Minneapolis neighborhood. We would catch rare glimpses of him crossing a street or loping across a neighbor’s yard. On one thrillingly memorable evening, we were passing an alley at dusk when we glanced to the right and there he was, maybe 50 feet away. He looked at us. We looked at him. We stood there 10 seconds, or 30, or days. Then he turned and was gone.

In Eric Coble’s play “My Barking Dog,” an encounter with a coyote in an unnamed city changes the lives of two lonely people, and maybe everything else. The play is being produced by Market Garden Theatre, a small, young company founded in 2013, at the still-raw Crane Theater space in northeast Minneapolis.

The story starts out innocently enough. Melinda (Victoria Pyan) has worked the night shift at a printing factory for 14 years, the better to be left alone. Toby (Mike Swan) is a former office manager, unemployed for months and running out of money. They have lived on different floors in the same apartment building for years without meeting.

As the play opens, Melinda is methodically loading paper into machines. Toby is carrying his laptop around his apartment, searching for free Wi-Fi. The first part of the play is a split screen. Her life is on the left, his on the right. We see them watching the same TV shows, each laughing at different things. Then a coyote climbs their fire escape. (The Latin name for coyote is Canis latrans, which translates to barking dog.)

From the start, we’re asked to fully engage our imaginations. There are no machines, laptops or fire escapes. The only scenery is a cityscape sketched on the back wall; the only props are two metal chairs. The floor is a gray chalkboard. Pyan mimes her repetitive job; Swan air-types. Strong acting and Kassia Lisinski’s smart, subtle sound design make it work.

With the arrival of the coyote, the play becomes surreal and political. Melinda and Toby meet, both caught up in the wonder of the wild creature in the city. “Are we closing in on them, or are they closing in on us?” Melinda asks. They leave food for it. They wait for it, and their faces light up when it appears. In their own ways, they fall in love with it.

Not with each other; that would kill the play. For Melinda, the coyote awakens her activism and radical environmentalism. She becomes a self-styled savior of all wild things and vengeful destroyer of what stands in their way. “The wild needs a home, too!” she scrawls on the wall. “Nothing prepares the earth for new life better than a layer of ash,” she says when Toby asks about the sudden, frequent fires in the city. Sirens turn to howls.

Toby’s love for the coyote is more complicated. The coyote brings him fresh kills: raccoons, chipmunks, squirrels. He spends his days in the city park, looking for scat. He sheds his socks and shoes. He becomes a wild thing, and more.

When you walk into a small, unfinished studio space to see a theater company you don’t know, anything can happen. Sometimes it’s earnest but awful. And sometimes it’s why you go to theater in the first place: to be taken someplace you weren’t expecting to go. Produced on a shoestring – we’re told that Market Garden’s budget is Facebook and Kinko’s coupons – “My Barking Dog” is powerful and strange. Coble’s language is beautifully crafted; listen for Melinda’s story about the man and the badge. Pyan and Swan are fearless and sure in their roles. (Speaking of fires, Pyan also appeared in Frank Theatre’s 2016 production of “The Arsonists.” Another surreal outing.) The play is directed by Market Garden’s artistic director and co-founder Lucas Skjaret, who has directed everything the theater has done to date. It’s 90 minutes long, with no intermission, and it closes Sunday, April 29. FMI and tickets ($13-20 pick-your-price). Mature language and themes.

The Minneapolis St. Paul International Film Festival is in its final week. Catch an arts film or two before they’re gone. All but “Mole Man” are at the Film Society’s St. Anthony Main Theatre.

Today (Wednesday, April 25): “The Book of Clarence.” In 1983, Clarence Fountain and the Blind Boys of Alabama starred in the Broadway show “Gospel at Colonus,” produced by Lee Breuer. Now Breuer is back with a tender portrait of Fountain’s life and career. Breuer will attend. 4 p.m. FMI, tickets and trailer.

Tonight: “Mole Man.” Guy Fiorita was filming an episode of the History Channel’s “American Pickers” when he met a man named Ron Heist. Part of the so-called “lost generation” of people with undiagnosed autism, Heist is a gifted craftsman who built himself a 50-room, maze-like home from found materials. Fiorita thought Heist’s story was worth telling. The director will attend. 5 p.m. FMI, tickets and trailer. Note: This one is at the Uptown Theater.

Tonight: “Dragonfly Eyes.” The eyes of a dragonfly have up to 30,000 facets. How many surveillance cameras are watching us as we go about our lives? For his first film, Beijing-based artist and MacArthur fellow pared 10,000 hours of surveillance footage down to 81 minutes that tell the fictional story of a young woman and reflect on issues of privacy, violence and the limits of social commentary. 7:15 p.m. FMI, tickets and trailer. 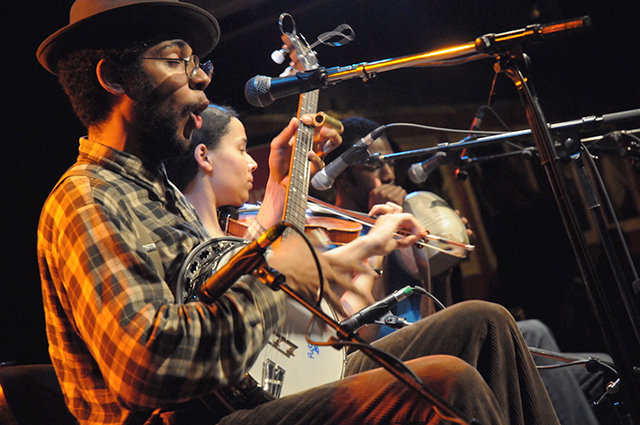 “Don’t Get Trouble in Your Mind: The Carolina Chocolate Drops Story,” a documentary about the black string band that went from busking in the streets to winning a Grammy.

Thursday: “Don’t Get Trouble in Your Mind: The Carolina Chocolate Drops Story.” A documentary about the black string band that went from busking in the streets to winning the Traditional Folk Album Grammy. Emmy-winning filmmaker John Whitehead will attend. 9:25 p.m. FMI, tickets and trailer. 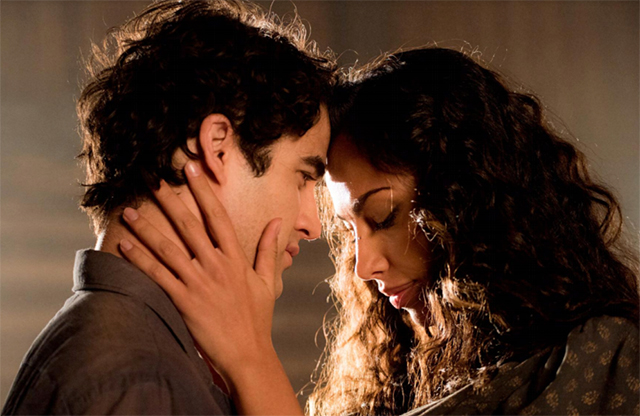 Darren Criss and Madalina Ghenea in a scene from “Smitten!”

Saturday: “Smitten!” This highly anticipated indie has strong Minnesota connections. It was directed by Barry Morrow of “Rain Man” fame (he and producer Julia Rask both grew up in Robbinsdale), and Dan Chouinard had a hand in the music. Chouinard wrote in an email: “I scouted out alpine folk dance tunes and songs sprinkled throughout the movie and worked alongside Minneapolis choreographer Joe Chvala on the one big tavern dance scene. I appear for all of a few seconds here and there, much of it in a donkey mask. The ass with the accordion, that would be me.” 4:20 p.m. FMI, tickets and trailer. Morrow, Rask and Chouinard will attend.

Saturday: “Supa Modo.” Nine-year-old Jo is a girl in Kenya, a cancer patient and a Jackie Chan fan. She wants to make a movie, and the people of her village love her enough to help her. One reviewer called this “the most important superhero movie you’ll see this year.” Bring the Kleenex. 10 a.m. FMI, tickets and trailer.

‘My Barking Dog’ is powerful and strange; international film highlights