If you wander into the Walker’s new show without knowing anything about it, or the artist, or conceptual art, you’ll still have a good time. “Allen Ruppersberg: Intellectual Property 1968–2018” is full of ideas, playfulness and wit. And words. If you like your art with words in it, there’s no better show in town right now.

The exhibition is so eclectic it seems at first like a group show. As you walk through, it comes together as one person’s memories, interests, take on life and view of the world. It’s permeated with a sense of humor and respect for artists who came before.

The first piece you see is an acrylic on canvas painting of a book titled “Greetings From California.” Born in a suburb of Cleveland, Ruppersberg moved to Los Angeles at 18 for college. He stayed. You get the feeling that his free-spirited, anything-goes art could only have happened in sunny SoCal. At his first solo show, when he was 25, people showed up at a gallery and were directed to go somewhere else. The second site was a white room containing a cow’s skull and some leaves. It’s part of the Walker’s retrospective.

We would happily fill our home with Ruppersberg’s work, if we could afford it. Here are some of our favorite things from the show.

“Art” (1962). A framed copy of a newspaper clipping headlined “Police Kill Writer on Way to Rob Bank,” with “Plan Outlined in Manuscript” printed above. Ruppersberg added a few comments in pencil, like “Leave Me Alone.”

“The New Five Foot Shelf” (2001). The Harvard Classics, aka Dr. Eliot’s Five Foot Shelf, was a set of 51 works once considered essential reading for the educated person. Ruppersberg replicated the books, then filled them with his own text, including a series that begins “Honey, I rearranged the collection ….” Example: “Honey, I rearranged the collection in order to remember why we wanted to have one in the first place.”

Ruppersberg’s works are drawn from his own vast collections of books, objects, images and ephemera. They mine his memories and our mass-produced cultural history. The final work in the show is truly lovely, a surprise to anyone who has lived in the cities long enough to visit the Walker several times and attend concerts at the old Guthrie, back when the Ralph Rapson-designed building and the Walker stood side-by-side on Vineland Place. 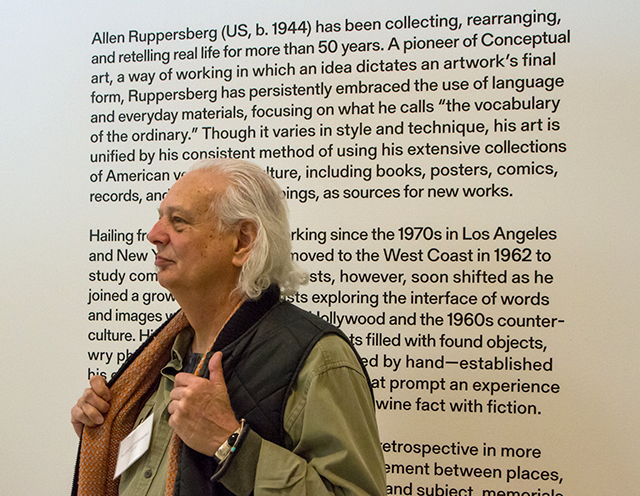 “The Shoes Are Centered on the Shelf” (2018), a Walker commission, is a room-size installation in the light-filled Medtronic Gallery in the Barnes Building. Created over a period of several years, during which Ruppersberg had access to the Walker’s library and extensive archive of printed materials, it includes 1,500 color photocopies hung on the walls. There are concert programs, invitations, newspaper articles and photographs. At the center is a sculpture most of us have probably never seen, George Herms’s “The Berman Peace” (1968). Ruppersberg liked it and wanted it there. Colorful wood furniture is scattered around so you can sit and take it in. It’s a warm bath of nostalgia and a gift to us all.

At the press walk-through in March, both Ruppersberg and curator Engberg seemed relaxed and pleased with the show, though Ruppersberg had a few words to say about the level of a recording and the arrangement of the furniture in the final gallery. Asked what he thought of the retrospective, Ruppersberg said, “I’m very, very happy. Everything is top-level.” Asked how one creates a site-specific work, he said, “The first thing you do is go there and look around.”

“Allen Ruppersberg: Intellectual Property 1968–2018” continues through July 29. After that, it will travel to the Hammer Museum in Los Angeles.

So many interesting talks this week.

Tonight (Tuesday, April 4) at Open Book: Lesley Nneka Arimah’s “What It Means When a Man Falls from the Sky” paperback launch. If you already know this book and love it, stop by to hear Arimah read from it. Ditto if you’re curious why first-time author Arimah won the very-big-deal Kirkus Prize. Wine and light refreshments. 7 p.m. Free. 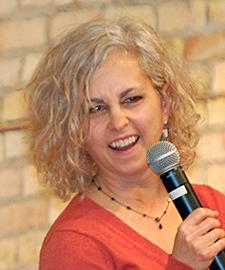 Tonight at Northrop: Young People’s Lit Panel. Four stars from the YA authors’ firmament will constellate for the U’s annual Esther Freier Lecture in Literature. MT Anderson is the National Book Award-winning author of “The Astonishing Life of Octavian Nothing.” Kate DiCamillo, our local treasure, is a two-time Newbery medalist. David Marclay Moore’s debut, “The Stars Beneath Our Feet,” was a New York Times notable book of 2017 and will be a movie. Nicola Yoon’s first book, “Everything, Everything,” is already a major motion picture; the film version of her second, “The Sun Is Also a Star,” will be out in May 2019. Thurber Prize winner and YA novelist Julie Schumacher will moderate the discussion to be followed by an audience Q&A and a book signing. 7:30 p.m. FMI. Free and open to the public.

Wednesday at the Bryant-Lake Bowl: Writers Go to the Movies. Each month, a local writer presents a film that has informed or inspired their writing practice. April’s film is “Kurosawa’s Dreams.” The presenters are Joe Horton and Dennis McKenna, a very interesting pairing. Horton is an interdisciplinary artist, rapper, and creator of “A Hill in Natchez,” which premiered at the Southern Theater in 2016. McKenna is an ethnopharmacologist, lecturer, and brother of Terence McKenna, a proponent of plant-based psychedelics. Doors at 6 p.m., event at 7. FMI and tickets ($6-12 sliding scale).

Thursday at the Humphrey School: Art as Inspiration for the Common Good: Honoring Joan and Walter Mondale. PBS is about to start airing a nine-part series exploring how art has shaped civilizations throughout the world. (More about that later this month.) Closer to home, the Humphrey School has named its commons after Joan and Walter Mondale, lifelong supporters and advocates for the arts. The evening will begin with a panel discussion featuring Roderick Cox, the Minnesota Orchestra’s associate conductor; Carra Martinez, the Guthrie’s director of community engagement; and Matthew Welch, Mia’s deputy director and chief curator. A dedication and reception will follow with Humphrey School Dean Laura Bloomberg, U of M President Eric Kaler and Walter Mondale. 5 p.m. FMI and registration. Free and open to the public.

Thursday at the U’s Walter Library: Rhiana Yazzie. In March, Navajo playwright, filmmaker, director, performer, producer and artistic director of the New Native Theatre won a Bush Foundation fellowship. On Thursday, she’ll be the featured speaker at the U of M’s Department of Indian Studies Native Artist Talk series. In Room 402. 6:30 p.m. Free and open to the public.

Thursday at the U’s Continuing Education and Conference Center: Headliners: Net Neutrality: Then, Now, Later. Christopher Terry, assistant professor at the Hubbard School of Journalism and Mass Communication, speaks on an issue we should all care a lot about. In Feb. 2015, the FCC voted in favor of keeping the internet open and free, and prohibiting broadband service providers from blocking or slowing web traffic. On Feb. 22 of this year, the FCC took the first steps toward officially abolishing current net neutrality rules. A legal battle is under way. Terry will tell the tale. 7 p.m. FMI and registration ($20).