Artists have made art in response to elections, police shootings, school shootings, racism, climate warming and the #MeToo movement. It’s what artists do. But the art doesn’t always end up at the Minneapolis Institute of Art.

Until 2008, when Mia established its Department of Contemporary Art, it was a museum of things from the past, and most of those things were not from around here. Opening June 17, “Art and Healing: In the Moment” points squarely at the present. The exhibition will include 15 paintings, sculptures, videos, posters and textiles created by Twin Cities artists in response to the fatal shooting of Philando Castile.

Castile was shot on July 6, 2016, by St. Anthony police officer Jeronimo Yanez during a routine traffic stop on Larpenteur Avenue in Falcon Heights. In the months after Castile’s death, artists created artworks in response to the tragedy and gave some of them to the Castile family.

They have made Castile’s mother, Valerie Castile, feel less alone. “There are times when I sit in my living room, grieving, but then I look around and see this art, and I know I’m not the only one affected by Philando’s death,” she said in a statement. The family approached Mia about sharing the art with the public. 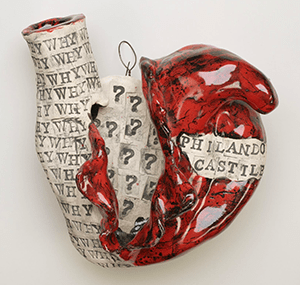 “Art and Healing” is the result of a collaboration among Mia, the Castile family and an advisory group from the community. In Valerie Castile’s words, “It’s about connecting, reaching out, having a conversation.” Kaywin Feldman, Mia’s director and president, said, “Art is an expression of our shared humanity, and we must protect, nurture, and celebrate the work of artists, even when what they show us is painful.”

Programming around the exhibition will include a June 22 talk at 5 p.m. by Bryan Stevenson, director of the Equal Justice Initiative, which founded the Legacy Museum: From Enslavement to Mass Incarceration and the National Memorial for Peace and Justice in Montgomery, Alabama. Workshops for the public will be hosted on Fridays at 6 p.m. by artists, organizers and facilitators. All are free, but reservations are recommended. Tickets to Stevenson’s talk are available starting today (Tuesday, May 22) at 10 a.m., online or at 612-870-3000. “Art and Healing” closes July 29.

Tonight (Tuesday, May 22) at the U’s Andersen Library: Exhibit Celebration: “Prairie Poets & Press; Literary Lives of the Upper Midwest.” Reservations are at capacity for what might otherwise be a fairly low-key literary event. Maybe because the brief program includes Garrison Keillor’s first public performance in the Twin Cities since MPR cut ties with him in November 2017 after allegations of inappropriate conduct. The exhibit is a trip through Minnesota’s literary history; Keillor will read a selection by Bill Holm. Also on the program, reading works by Minnesota writers: Jim Lenfestey, Athena Kildegaard, Freya Manfred, Philip Bryant, Emilie Buchwald, Margaret Hasse and Mark Vinz. Event at 5:30 p.m., program at 6. The exhibit remains open through Aug. 24.

Now at the Walker: Skyline Mini Golf 2018. Putts with a view of the Minneapolis skyline. During the Sculpture Garden renovations, the Walker’s popular mini golf course moved to the outdoor terraces on the red brick Barnes Building. It seems that’s where it will stay. Tee up for 10 artist-designed holes at least once this summer. Generous hours (closed Mondays); first-come, first-served. Admission $10, $8 Walker members and ages 7–18; free for 6 and under with paid adult. Each ticket also includes one $5 gallery admission to use within 6 months. FMI. Closes Sept. 2.

Wednesday at Moon Palace Books: Susan Cushman and Rosemary Lowe: “The Wait: Love, Fear and Happiness on the Heart Transplant List.” Jennifer Bonner was a National Merit scholar, Carleton student, and budding artist born with life-threatening heart defects. She spent most of 1988 waiting for a new heart and died in December of that year. Bonner kept a diary of her thoughts and experiences, everyday events and confrontations with her physical limitations and her mortality. Cushman, a Carleton graduate and retired physician, edited the diary and framed it with the story of the family and the medical advances that allowed her to reach age 21. Novelist Jane Hamilton wrote the foreword. Lowe, an actor, will perform excerpts from the diary. What an interesting way to present a book. 7 p.m. Free. 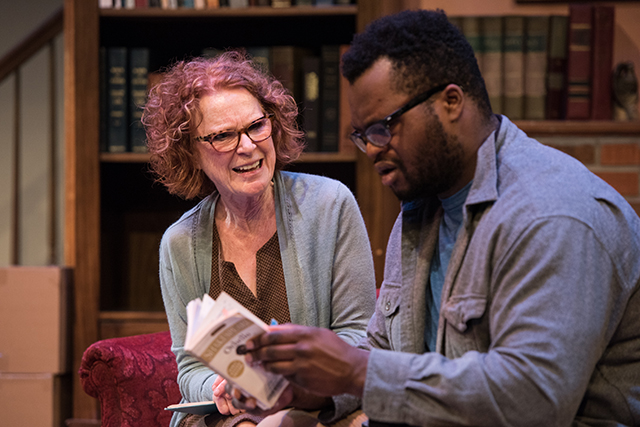 Photo by Alyssa Kristine
Linda Kelsey and John A.W. Stephens in a scene from “Taking Shakespeare.”

Thursday through Sunday at the Gremlin: “Taking Shakespeare.” Linda Kelsey is Prof, an aging professor questioning her relevance and ability. John A.W. Stephens is Murph, a slacker student who’s failing academically. John Murrell pairs them over “Othello” in his two-person play about Shakespeare, the power of language and poetry, and things people can learn from each other, even when they have nothing in common. Murrell doesn’t specify a race for Murph; Hansen cast a black actor, which throws “Othello” into a different kind of relief. 7:30 p.m. Thursday-Saturday, 3 p.m. Sunday. FMI and tickets ($28 general admission; under 30, pay half your age).

Opens Friday at the Lagoon: “The House of Tomorrow.” Filmed in the Twin Cities, adapted from Peter Bognanni’s best-selling novel by the same name, director Peter Livolsi’s film follows 16-year-old Sebastian, who was raised by his grandmother in a geodesic dome. As Sebastian falls in with chain-smoking, punk obsessed Jason, a boy with a heart transplant and a Bible-banging father, he must decide his future: Will he be the next Bucky Fuller or the next Sid Vicious? Bognanni will be here on opening night for a Q&A after the 7:20 show. The film stars Oscar-winner Ellen Burstyn as the grandmother, Asa Butterfield as Sebastian and Alex Wolff as Jason. It’s gotten good reviews and geodesic domes are cool. FMI including trailer and tickets.