A brand-new play at the Minnesota Jewish Theatre Company drew a sizeable crowd on a Wednesday night. And everyone stayed through the length of it – all 2 ½ hours, with one 10-minute intermission.

That says a lot about Deborah Stein’s “Natasha and the Coat,” which is having its world premiere at MJTC under Miriam Monasch’s direction. Stein is a young playwright and an affiliated writer with the Playwrights’ Center. If her name sounds familiar, she was once based in Minneapolis and a member of Workhaus Collective.

The play is basically a girl-meets-boy tale, with twists. Natasha (Miriam Schwartz) is a modern young woman, fresh out of college with a major in art history and a minor in French. She lands an unpaid internship at a high-end vintage clothing “atelier” in Williamsburg, Brooklyn. Her boss is the witchy but exquisitely dressed Felicity (Kim Kivens). When Natasha spills coffee on a luxe fur coat, she spirits it away to a neighborhood dry cleaner, hoping to have it back before Felicity notices.

Mordy and Sons, the dry cleaner, is run by Hasidic Jews. Natasha meets Yossi (Avi Aharoni), who manages the business for his parents. He’s never heard of James Bond, never seen a movie, wears payot (long sidelocks) and traditional clothes, and can’t read English. Opposites attract powerfully. The on-stage chemistry between Schwartz and Aharoni is a big part of what makes the play so enjoyable.

You expect and kind of hope the play will have a certain type of ending. But it’s not that simple. Natasha and Yossi are from two different worlds. Yossi yearns to break free of his, to feel alive. His compassionate father, Mordy (Charles Numrich), understands. But his mother, Sylvia (Muriel Bonertz), fears and rages against change, against modernization, and especially against young women who show their hair, bare their arms and tempt their sons. Bonertz is so formidable as Sylvia, and so majestic, that she comes close to stealing nearly every scene she’s in.

The play pulls back the curtain a bit on orthodox Jewish life. One of its most interesting twists is how Natasha comes to respect Yossi’s beliefs, and the choice she makes as a result. When he’s most vulnerable, she steps back.

Michael Hoover’s smart scenic design accommodates the frequent scene changes from Felicity’s to Mordy’s and back again. Two carousels in closets at either side of the stage turn to reveal colorful vintage clothing or rows of white shirts and black suits. Lisa Conley must have had a wonderful time sourcing the costumes. Kivens looks fabulous every second she’s on stage. We hope her contract let her keep a dress or two.

The language is lively and conversational, which moves the play along. Stories are told and memories shared – of a small town in Poland that no longer exists; of a grandmother who sewed clothing. The characters become real people who are true to themselves. But it’s not a perfect play. Too much is built on a silly fib Natasha tells Felicity early on. And you don’t want to think too hard about how Yossi ends up with jeans, a T-shirt and sneakers that fit. There are other loose ends. But “Natasha and the Coat” also asks questions worth pondering. How do we reconcile the old with the new, or do we? Are some differences insurmountable? Who owns a neighborhood?

As usual in our fair cities, the picks are the tip of the iceberg.

Tonight (Friday, May 4) through Sunday at Studio Z: Zeitgeist 40th Anniversary Celebration. Forty years! That’s how long the new music group Zeitgeist has stayed new. Fiercely dedicated to the music of our time, they have commissioned more than 400 new works from living composers. In their bespoke listening room in Lowertown, they’ll revisit several of these in performances over the weekend. 7:30 p.m. FMI and tickets ($15/10). 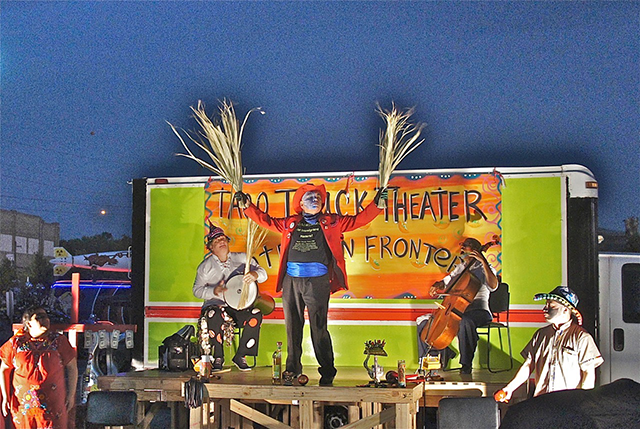 Friday and Saturday at Intermedia Arts: Pangea World Theater Presents Taco Truck Theater/Teatro Sin Fronteras (Theater Without Borders). The Intermedia Arts building is for sale, but Pangea has permission to use it for a weekend of “radical outdoor theater on wheels.” Award-winning performance artist José Torres-Tama and his ArteFuturo Ensemble will cross economic, geographic and racial borders to challenge anti-immigrant hysteria. This performance piece (with pop-up food vendors selling tacos) will be staged in collaboration with local Indigenous artist Tom LaBlanc, Somali artist Ifrah Mansour and two DREAMers. It will begin in the parking lot and move inside like a New Orleans Second Line. 28th and Lyndale. 7:30 p.m. FMI and tickets ($10-20 or pay what you wish).

Saturday at the Midtown Farmers Market: Opening Day Food Truck Fest. One of the first outdoor markets in Minneapolis, Midtown will return for its 16th season. The weather looks good (no snow!) for a morning of live music, games, giveaways, a hula contest, kids’ activities, food trucks (eight!) and goods from more than 40 local farmers and artisans. 2225 E. Lake St., steps from the Lake Street/Midtown Blue Line stop. 8 a.m. – 1 p.m. The Midtown Farmers Market will be open every Saturday from May 5-Oct. 27.

Saturday at Union Depot: Train Day. Train Day is a blast. Come for the trains – and a glimpse into railfan culture. Historic locomotives and rail cars show up to be photographed, admired and toured. Two vintage coach buses will be there; so will Paul von Fange, author of “Scenicruising: The Greyhound Scenicruiser Story.” Free 45-minute vintage bus tours through downtown St. Paul will leave on the hour. Exhibits will include model railroad layouts. 10 a.m. – 5 p.m. FMI. Free, except for two ticketed events: a Friday night photoshoot and a Saturday multimedia show of railroad photos and videos set to music.

Monday at Bryant-Lake Bowl Theater: The Theater of Public Policy: “We’re Here. We’re Queer. We’re Going to Use a Hashtag.” An all-LGBTQ T2P2. For a show about the LGBTQ movement and local leadership, everyone on stage — guests, cast, host and musical director — will be people who identify as lesbian, gay, bisexual or trans. The guests will be Philippe Cunningham of the Minneapolis City Council and Charlie Rounds of the Mossier Social Action and Innovation Center. T2P2 is the improv theater group that turns serious topics into comedy for your enjoyment and painless elucidation. Doors at 6 p.m., show at 8. FMI and tickets ($12 advance, $15 door); 612-825-8949.

Monday at Northrop: “Gender Violence in Dance: Where are we now?” In January, Chicago’s esteemed Hubbard Street Dance returned to Northrop for a program of highlights from its 40-year history. One was a duet by choreographer Nacho Duato called “Violoncello.” A male dancer dressed like Bach played a cello, except the instrument was a female dancer wearing a leotard. Some in the audience saw beauty; some saw sexual violence and abuse. (Times have changed. In 2001, when New York Times dance critic Anna Kisselgoff reviewed the U.S. premiere; the headline read “Bach Plays a Cello Here, and the Cello Likes It.”) Students in the U of M dance program have organized a public roundtable discussion about misogyny and gendered representation in dance. In the Ellie and Tom Crosby Seminar Room, 2nd floor east. 3:30-5 p.m. FMI. Free. 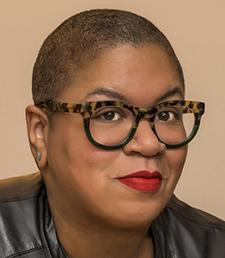 Wednesday at Brooklyn Park Library: Club Book: Samantha Irby. Her books (so far) include “Meaty,” which was recently optioned by FX for a half-hour comedy series, and “We Are Never Meeting in Real Life,” a New York Times bestseller. A comedian, memoirist, blogger (“Bitches Gotta Eat”), humorist, and essayist, Irby is a singular voice in contemporary African American literature. According to her blog, she’ll be out with “Meaty.” 7 p.m. FMI. Free.

‘Natasha and the Coat’ has twists and onstage chemistry; Taco Truck Theater at Intermedia Arts