Now in its fourth year, the Right Here Showcase gives us something we can’t get anywhere else: two long weekends of new work by Minnesota-based performing artists in midcareer. Started and led by Paul Herwig of Off-Leash Area, this juried festival awards commissions and encourages experimentation. 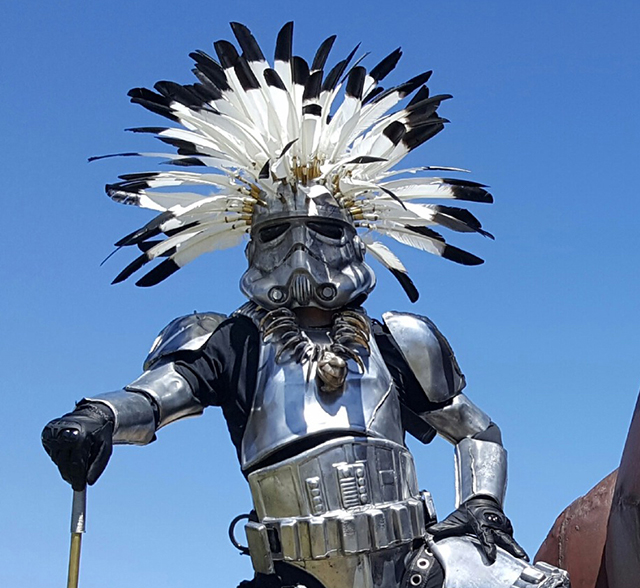 Starting next Thursday (May 17), Anishinaabe visual and installation artist Rory Wakemup will present his “Ledger Craft” project, a hybrid of Native American Ledger Art and the “Minecraft” video game. (Volunteers from the audience will be needed as part of the performance.) For “LOPsided,” his final show before leaving Minnesota, dance artist Brian J. Evans will use music, video, dance/theater and photography to dive into a landscape of polarized issues.

For the first few years, the showcase bounced between the JSB Tek Box and the Illusion Theater. Now that Off-Leash has a home, the Art Box, so does the showcase. Thursdays-Saturdays at 8 p.m., Sundays at 5 p.m. FMI and tickets ($10-30 sliding scale).

“Speechless” returns to the Lab

One of the best things we saw in 2017 was a devised work by the Moving Company, the itinerant theater group led by Dominique Serrand, Steven Epp, Nathan Keepers and Christina Baldwin, formerly of Theatre de la Jeune Lune.

From our year-end wrap-up: “In a time of many words – often angry, cruel and divisive – the Moving Company gave us a wordless evening of beauty, hope, grace and lovingkindness.”

And no talking. Not a word. Just instrumental music – by Beethoven, Brahms, Schubert, Mozart and more – and movement. Facial expressions and gestures. Somehow they tell a story, even if it doesn’t have a plot. 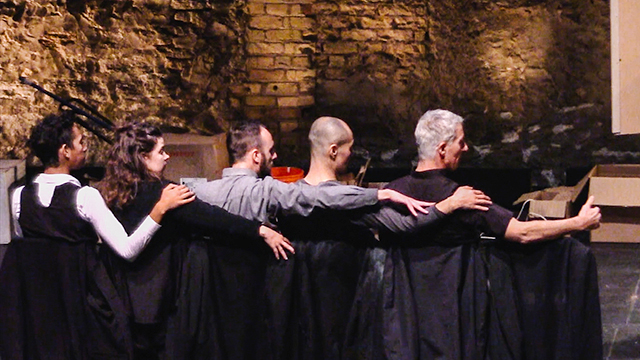 Courtesy of The Moving Company
If you didn’t see “Speechless” the first time, try to catch it this time.

“Speechless” does have a point of view. Things are bad. We’re in trouble. This is not how the world is supposed to be. So it’s sad, but it’s also uplifting. Moments of grief are offset by bits of magic, human interaction, humor and compassion.

The original cast included Nathan Keepers, Heidi Bakke, Stephen Epp, Holo Lue Choy and Masanari Kawahara. This time it’s Keepers, Bakke, Kawahara, Dominique Serrand and Camille Chong Yuanya Horstmann. (Epp is in “The Lorax” at the Children’s Theatre, with green hair.) If you didn’t see “Speechless” the first time, try to catch it this time. If you did see it the first time, you can see it again, and it might be even more profound. Maybe this will become an annual event, something we look forward to for its restorative properties.

Now at the History Theatre: “Lord Gordon Gordon.” The creators of “Glensheen” – playwright Jeffrey Hatcher, composer/musician/Suburb/New Standard Chan Poling, musical arranger Robert Elhai, director Ron Peluso – return with another world premiere musical based on Minnesota history. “Lord Gordon Gordon” (real name not known) was a fake, a fraud, a swindler and a con man who nearly started a war between the U.S. and Canada in the late 1800s. The cast includes Jennifer Baldwin Peden, Gary Briggle, and Mark Benninghofen in the title role. Both the St. Paul Grill and Meritage have created special cocktails in honor of this show, to enjoy before and/or after. Thursdays through Sundays. FMI and tickets ($57-15). Closes June 3.

Friday and Saturday at Open Eye Figure Theatre: Patrick’s Cabaret: Latinx-Q: A Celebration of Queer Latinx Artists. This will be Patrick’s final mainstage cabaret, the last of its signature programs. After three decades, the organization is closing down. Curated by the Big Gay Mexican, the evening will feature a short play by Keila Anali, a performance by flow artist Nezzie Garcia, spoken word by Ellis Perez, original songs and live painting by Christian Ybarra + Mimi Solis, and a work by Beliza Torres Narvaez. 7:30 p.m. FMI and tickets ($10; $12-20 sliding scale at the door).

Friday through Sunday at the Cowles: Stuart Pimsler Dance & Theater: “Matinee.” A lonely woman goes to the movies, looking to escape her dreary life. Adapted from a short story by Robert Coover, this multimedia production blends films, dance, projections, and theater. It premiered at the Woman’s Club in February 2017, earned rave reviews, then toured for a year before returning home. Referencing film noir, musicals and romance, shifting locations from train cars to restaurants to shabby hotel rooms, it looks back to a time when we went to the movies to lose ourselves. 7:30 p.m. Friday and Saturday, 2 p.m. Sunday. FMI and tickets ($20/30). Mature content. Enticing trailer.

Saturday at Walker West Music Academy: 30th Anniversary Kick-Off Celebration. Founded in 1988 by Rev. Carl Walker and Grant West, this St. Paul institution is a music learning community rooted in the African-American cultural experience. Walker West is starting its 30th year with a new face: an exterior redesign with a façade by artist Ta-coumba Aiken. St. Paul’s new mayor, Melvin Carter, will attend, along with his communications director Peter Leggett, formerly Walker West’s executive director. Selby Ave. will be closed to traffic so we can all view the new façade and listen to students and faculty perform. 760 Selby Ave. 12 noon – 3 p.m. Free.

Tuesday and Wednesday at the Dakota: Terence Blanchard and the E-Collective. Touring behind his latest album, “Live,” released on April 20, Grammy-winning trumpeter Blanchard is revisiting the three cities where it was recorded: Cleveland, Dallas, and Minneapolis. Cleveland because of Tamir Rice, Minneapolis because of Philando Castile and Dallas because of Lorne Ahrens, Michael Krol, Michael Smith, Brent Thompson and Patricio Zamarripa, five police officers who were killed while covering a peaceful Black Lives Matter protest. The music is meant to promote hope and healing, but that doesn’t mean it’s feel-good music. There’s rage in it, and sorrow, and urgency. It’s music you make when you’re someone like Blanchard and you can’t pretend the world is a big, peachy place. With Fabian Alamazan on piano, David Ginyard on bass and Charles Altura on guitar. Sets at 7 and 9 p.m. FMI and tickets ($40/25).