London-based Somali musician Aar Maanta was supposed to be in Minnesota last fall for a monthlong residency with the Cedar Cultural Center’s Midnimo program. That was canceled because of a visa delay. So was a visit scheduled earlier that year. Last week, the Cedar, which doesn’t give up easily, named Aar Maanta its 2018-19 Artist-in-Residence.

The Cedar has hosted Aar Maanta twice before, in 2012 and 2015. In April of this year, they received a yearlong visa for Aar Maanta that will allow him to perform four concerts, tour through Mankato and St. Cloud, participate in educational programs and residency events across the state, and work on a new Somali children’s album with Greg Grease (Astralblak) and Said Salah, a Somali playwright, poet, educator and filmmaker.

A singer and songwriter, Aar Maanta leads one of the few active touring bands in the world that plays live Somali music. He’s also a goodwill ambassador for the United Nations High Commissioner of Refugees (UNHCR). In early 2017, as part of a UNHCR campaign, several leading artists from Africa joined him for a recording and video of his song “Tahriib” (Dangerous Crossings), about the dangers refugees and migrants face when crossing to and through Yemen. Here’s the video. His debut album, “Hiddo & Dhaqan,” came out in 2009, his EP, “Somali Songs from the Diaspora,” in 2014. He’s working on a new album for release in fall 2018.

Aar Maanta’s residency kicks off Saturday at Como Park Pavilion with an Eid Celebration show from noon to 1:30 p.m. It’s free and no tickets are required. Eid is the festival of breaking the fast that ends Ramadan. Aar Maanta’s performance is part of …

The ridiculous weekend ahead part 2

Tonight (Thursday, June 14) through Sunday at the Cowles Center: Sally Rousse: “Icon Sam: Temple Dances.” Follow irresistible dance maker Rousse as she leads you through and around the Cowles in a site-specific promenade performance. The Cowles has a history – the building at 528 Hennepin was built as a Masonic temple (Icon Sam is an acronym for Masonic) – and a lively, vibrant present. And a future, with upgrades planned. Rousse wants us to know it better. So she commissioned other area choreographers (Wynn Fricke, HIJACK, Lise Houlton, Judith Howard, Judith Brin Ingber and Sossy Mechanics) to create new works, and those are what we’ll see. The audience is limited to 40 per show. 6 p.m. Thursday-Saturday, 3 p.m. Sunday. FMI and tickets ($25). Also Thursday-Sunday, June 21-24. Photo by Cameron Wittig
Sally Rousse wiill lead audiences through and around the Cowles in a site-specific promenade performance.

Friday through Sunday at the Park Square: Ken Ludwig’s “Baskerville: A Sherlock Holmes Mystery” opens in previews. Women as Holmes and Watson? Three actors playing the remaining 40 characters? An African-American director? Could there be a fresher take on an old familiar tale? Well, maybe if you set it on one of the moons of Jupiter. McKenna Kelly-Eiding (last seen in “Wolves” at the Jungle) is Holmes, Sara Richardson (of Park Square’s “The Liar”) is Watson in what’s sure to be a fun and fast-paced show. Rounding out the cast as everyone else are Eric “Pogi” Sumangil, Ricardo Beaird and Marika Proctor. Theo Langason makes his directing debut. 7:30 p.m. Friday and Saturday, 2 p.m. Sunday on the proscenium stage. FMI and tickets ($20-37 previews, $25-60 regular run). Closes Aug. 5. 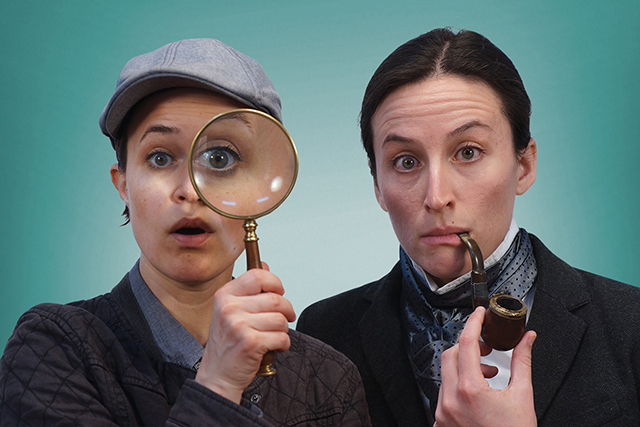 Saturday at the American Swedish Institute: Midsommar Celebration 2018. Celebrate like the Swedes and party hearty at this all-day summer blow-out. Make a wreath of flowers for your head, dance around the Midsommar pole, sing Swedish drinking songs, make a birch bark ring, learn the art of cow calling, eat strawberry cake from FIKA, hear Fiddles on Fire and Maria and Anders Larsson (from Sweden!), shop for handmade Swedish clogs at the pop-up shop, see “The Fantastical Worlds of Kim Simonsson” exhibition. All this and more, in and around the Castle, the HGA-designed Nelson Cultural Center and the courtyard that connects them. 10 a.m.-5 p.m. FMI and tickets ($10/7/5). Free for members and children under 6.

Saturday and Sunday at the Guthrie: “West Side Story” opens in previews. The Guthrie’s highly anticipated summer musical is selling out like crazy. If you don’t already have tickets for the weekend, try for later in the month. Hard to believe the Jerome Robbins/Arthur Laurents/Leonard Bernstein/Stephen Sondheim musical has never been seen on the Guthrie stage, but it’s true. That’s just one reason for the excitement. Joseph Haj directs the new revival, with new choreography by Maija Garcia. The final production on the thrust stage of the 2017-18 season looks back to the first, fall’s “Romeo and Juliet,” completing a pair of bookends. Marc Koeck and Mia Pinero will make their Guthrie debuts as Tony and Maria. FMI and tickets ($15 preview, then $34-92); 612-377-2224 (calling might be easier). Closes Aug. 26.

Friday and Saturday at Studio Z: Davu Seru: Two Nights of Improvised Music. Heads up, fans of creative music on the edge. Friday: Charcoal’s Revenge. The latest iteration of a legendary free-as-heck trio that began under another name in 2003 and performed with Evan Parker at the 2006 Minnesota Sur Seine festival. The players: Milo Fine on keys, Anthony Cox on bass, Seru on drums. Saturday: Welcome Thollem McDonas. The itinerant pianist whose musical adventures have included partnerships with William Parker, Pauline Oliveros and Nels Cline will be joined by Seru, multi-instrumentalist Elaine Evans (whose bag of tricks includes a pocket trumpet), and tuba player Benjamin Mansavage-Klein. 7 p.m. both nights. $5-10 donation at the door.