In 2018, we’re used to women running museums in the Twin Cities. Kaywin Feldman at Mia. The Walker’s two most recent directors, Olga Viso and Kathy Halbreich. Kristin Makholm at the Minnesota Museum of American Art. Cedar Imboden Phillips at the Hennepin History Museum. Dianne Krizan at the Minnesota Children’s Museum. Alison Brown at the Science Museum. Denise Young at the Bell Museum. Lyndel King at the University of Minnesota’s Weisman Art Museum (WAM).

But in 1981, when King became director of what was then called the University Art Museum, she was the only one. And the museum wasn’t even a museum, just a series of narrow halls on Northrop Auditorium’s fourth floor.

Earlier this week, 40 years after joining the organization in 1978, King announced that she would retire as director and chief curator in June 2020. She plans to stay on until then so she can be part of the university’s capital campaign and endow the position of director. “It is my final gift to WAM,” she said in a statement.

Earlier this month, King received the President’s Award for Outstanding Service, which recognizes exceptional service to the university. The annual award honors those who have gone far above and beyond their regular duties and demonstrated unusual commitment to the University community. When King walks out the door in 2020, she’ll be leaving evidence of exceptional service that few can match: the Weisman Art Museum (1993), the gleaming, dazzling, impossible stainless steel and brick building designed by Frank Gehry.

It was Gehry’s first major commission, before the Guggenheim Bilbao (1997) and the Disney Concert Hall (2003). King was instrumental in fundraising, attracted major funder Frederick R. Weisman and made it the sort of project that prestigious architects wanted to bid on. She worked with Gehry on the initial building in 1993 and again on the expansion in 2011 that nearly doubled the WAM’s exhibition space. King raised $32 million in funds.

Gehry said in a statement, “She has left a mark on the University of Minnesota’s campus that few others can claim. I got to be part of that process with her, and I can tell you that the Weisman Art Museum exists because of her indomitable spirit, her intelligence, and her perseverance.”

King also grew the museum’s collections from 9,000 artworks to more than 25,000, including American art, traditional Korean art, works on paper and a ceramic collection influenced by Warren MacKenzie. She has overseen more than 200 exhibitions and brought over 1.7 million visitors to the Weisman. Under her leadership, WAM has become one of the top teaching university museums in the country.

Said Karen Hanson, the U’s executive vice president and provost, “It is a superb legacy.”

A search committee will be appointed and will begin its work in fall 2019. The new director will start in July 2020.

Now at WAM, but only through June 17: “Prince from Minneapolis.” FMI.

Tonight (Thursday, June 7) in Mears Park: Music in Mears Opener. The first of a dozen free summer concerts in Mears Park starts with Hot Date (Nora O’Brien and Eric Carranza) before settling in with headliner Alex Rossi. This is the series’ 15th year, a gift to St. Paul with support from the city’s Cultural STAR Program. Music begins at 6:30 and ends at 9:30. FMI. 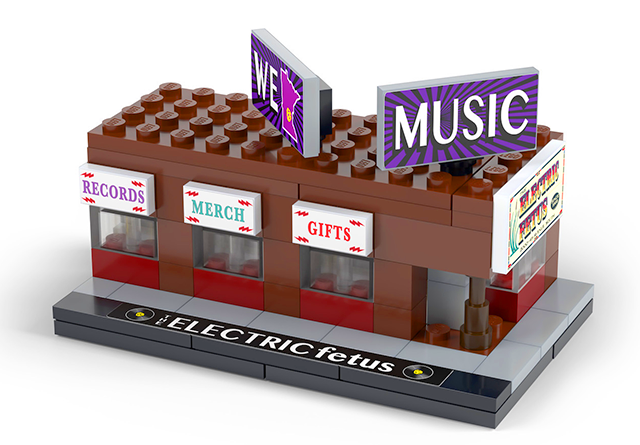 Brickmania
A 76-piece LEGO set of the Electric Fetus from Brickmania.

Tonight through Sunday at the Electric Fetus: 50th Anniversary Celebration. No one can explain how the iconic Twin Cities record store got its name, which is probably a good thing; 50 years ago would put us squarely in 1968. Along with limited-edition merch and a 50th Anniversary sale, here’s what’s happening. Tonight at 7 p.m.: Bobby Z in-store appearance and conversation, moderated by the Current’s Andrea Swensson. Saturday at 7 p.m. at First Avenue: 50th Anniversary Electric Fetus Party. FMI and tickets ($20). Sunday all day: in-store celebration on the Fetus’s official anniversary, with a DJ, Glam Doll Donuts and more. Remember, the highway construction isn’t the Fetus’ fault.

Friday at MCAD: Opening receptions for “Foodways” and “Instagram in the Artist’s Studio.” Two shows worth checking out. In “Foodways,” 17 contemporary Minnesota artists use the subject of food to explore consumption, acculturation and memory. “Instagram and the Artist’s Studio” includes work by 10 different artists and artist collectives. “Foodways” in the main gallery, 6-9 p.m., with catering by the Sioux Chef (a recent James Beard Cookbook Award winner with Beth Dooley). Closes Aug. 12. “Instagram” in the concourse gallery; closes July 15.

Courtesy of MCAD
Dakota Hoska, “Mitákuye Oyás’in: Owas Waúnyutapi (We are all related, we all eat),” from the exhibit “Foodways.”

Tuesday at the Dakota: GoGo Penguin. We met this British trio last September, just before they played their first Dakota date. They’re back, touring behind their new album for Blue Note, “A Humdrum Star,” which we like very much. We still hear some E.S.T. in them, which we don’t mind one bit, and their playing is even more beautiful than we remember. The band is Chris Illingworth on piano, Nick Blacka on bass, Rob Turner on drums. They call their music “acoustic electronica.” It’s jazzy and classical and whatever else strikes their fancy. Here’s a taste. 7 p.m. FMI and tickets ($25-30).

The Twin Cities Film Fest has partnered with the Twin Cities Jewish Film Festival, and that’s a good thing. News will spread, programming will expand, and additional TCJFF screenings will be held throughout the year. The TCJFF will run concurrently with the TCFF from Oct. 17-27 in St. Louis Park. A kick-off gala on Thursday, June 28, at the Sabes JCC will include a screening of the historical drama “An Israeli Love Story.” Tickets are on sale now ($12 early bird, $14 door). 6 p.m. red carpet reception and refreshments, 7 p.m. screening. 13+.

Lyndel King to retire from WAM; Lit Crawl in Uptown