To borrow from the Dos Equis commercial, Bobby McFerrin is the most interesting vocalist in the world. A 10-time Grammy winner, he sings in every conceivable style and invents new ones on the spot. He has a four-octave range and makes sounds you’ve never heard. He uses his body as an instrument. He’s a geyser of creativity.

Hearing and seeing him live is mind-blowing. It goes way beyond “Don’t Worry, Be Happy,” the song that won three Grammys in 1989 including Best Song and has probably been a thorn in his side ever since.

McFerrin last came to Minneapolis in 2014 on his “spirityouall” tour. That was at Orchestra Hall. He has never played the Dakota. He’ll be there tonight (Wednesday, June 13) through Saturday for two sets each night. It’s a tremendous opportunity to see him in a more intimate setting.

McFerrin is on tour with “Circlesongs,” the name of a 1997 album and an ongoing project. He and four members of his a capella choir Voicestra will perform eight different sets, each arising spontaneously, expanding to include the audience. Participation isn’t required but resistance may be futile.

Judi Vinar, a vocalist and teacher in the Twin Cities and choir director at Unity Minneapolis, will sing with McFerrin at the Dakota. She first met him in 1997, when he was creative chair at the St. Paul Chamber Orchestra. In 2001, she became a member of Voicestra, then toured with McFerrin for several years in the U.S. and Europe. Since 2008, she has taught an annual weeklong workshop with McFerrin in upstate New York.

We spoke with her on Tuesday by phone.

MinnPost: What is it like to sing with Bobby McFerrin?

Judi Vinar: It’s pure joy. It’s a little bit intimidating, but he’s a very kind and loving person, and he takes the time to get to know the people he’s working with. We become family. But it’s also practice. He actually soloed me out on the very first gig I did with Voicestra. But he did what I knew. He was riffing off a jazz kind of thing, and he looked at me and said, “Solo.”

MP: Is he a perfectionist?

JV: He is with himself, but I don’t think he is with others. He looks for music in the moment, finds the glory in what someone else is doing, then adds his own perfection to it.

MP: What do you bring to singing with him?

JV: I bring everything that I have. He is so focused that he raises the bar for everybody around him. When I’m with him, my brain switches into a really good focus place. He lets me relax, and he asks me to step up. It’s a kind of magical assignment, and he’s incredibly forgiving. If I come up with something in the moment and it’s not a perfect moment, we make music out of it and move on.

MP: How would you describe Circlesongs?

It’s music in the moment, built out of the moment, and it morphs into whatever it wants to be. It’s usually started by one person who gets an idea, who improvises and finds some kind of pattern they want to give to a member of the group. Bobby will improvise, then have another idea, and he’ll find a pattern and feed it to one of us, and we’ll sing that pattern, and he’ll be able to go further in the improv journey he’s on. And he might create another pattern, or four, so there’s this bed of music going on, and he’ll improvise over that. It becomes a song in some way or fashion. Most of the time, it doesn’t have words.

It’s community singing, and the community has to step up, be awake and be supportive. 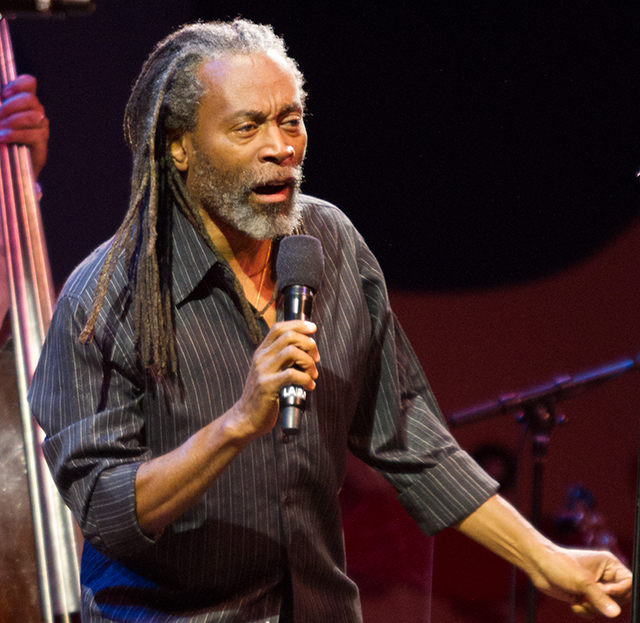 MinnPost photo by John Whiting
Bobby McFerrin is at the Dakota tonight through Saturday.

MP: Do you go in with ideas in your head you’d like to try?

JV: I try not to, because that is a train wreck. Do you know the movie “A League of Their Own?” About the women’s baseball team during the war? Tom Hanks yells at one of the players, “Are you crying? There’s no crying in baseball!” Bobby uses that line. He says, “Are you planning? There’s no planning in improv!” He’s right. If you go in with an idea ahead of time, you can really mess it up.

MP: What are some other things you’ve learned from him?

JV: I’ve been reaffirmed in some things I already believed. One is don’t label yourself. I studied classically and was labeled a soprano, and I could hit the notes, but I really enjoyed singing things that had no business in the world of sopranos. He’s taught me to seek the entirety of my instrument, and he’s taught me to be kind and to remember there are people out there. It’s not just about trying hard and being the best and getting up on stage with the band. It’s about the relationship with everyone in the place. He works with the audience better than anybody I’ve ever seen.

He doesn’t consider himself a performer. He hates the word “performing.” He goes in there trying to be the best he can be, and he never leaves before trying to include everybody in what he’s doing. His greatest goal is to get people singing at the kitchen table.

MP: Many people think that improvising boils down to making things up. How would you define it?

JV: The same way! Bobby makes a joke when he introduces the faculty at the workshops in New York. He says, “We all have a degree from MSU – the school of Making Stuff Up.” It is really about making stuff up. When you do some of it, you’re a beginner at making stuff up. And then when you do more of it and begin practicing it, you become a little bit better at it, and that’s what’s going on with him. He’s been making stuff up for decades. We’ve been doing the same thing.

JV: When I’m improvising with the Wolverines [jazz band], there’s a structure in place – harmonic, rhythmic, and so forth. Every standard swing tune is 32 bars, so you know how long you have. With Circlesongs, the structure doesn’t exist until the first person creates it. We’re creating something from nothing. That’s the biggest difference between circle singing and jazz improv.

MP: It sounds like your work with Bobby McFerrin has been a great experience for you.

JV: From a musical perspective, it’s the greatest thing that ever happened to me, and it continues to be.

What’s it like to sing with Bobby McFerrin? ‘Pure joy,’ says Judi Vinar