On Friday, Roderick Cox will lead two “Symphony in 60” concerts for the Minnesota Orchestra. These will be his final concerts as the orchestra’s associate conductor. Part of this year’s Sommerfest, a celebration of Nelson Mandela, they will feature music of peace and reconciliation.

A lot has happened between 2015 and today. Cox is no longer in his twenties. As one of two African American conductors in the United States with positions at major orchestras, he has captured the national and international spotlight.

Cox has led critically acclaimed Minnesota Orchestra subscription concerts, helped relaunch the Johannesburg Philharmonic in South Africa, led concerts in Washington, D.C. for the opening of the Smithsonian National Museum of African American History and Culture, and appeared with many orchestras across the nation. In May of this year, he was in Amsterdam, one of four conductors selected for a prestigious masterclass with Daniele Gatti and the Royal Concertgebouw Orchestra.

Also in May, Cox won the 2018 Sir Georg Solti Conducting Award, the biggest grant given to young American conductors in the United States. The timing was perfect. The Solti instantly expanded his professional network and put $30,000 in his bank account.

In Cox’s words, the award is “a great ending point for here and a beginning point for my future life.” That door is wide open. After leaving Minnesota, he’ll spend several months in Berlin, then make his conducting debut with the Houston Grand Opera.

We spoke with Cox earlier this month at Orchestra Hall. This interview has been edited and condensed.

MinnPost: In print and live interviews, you have alluded to sacrifices you’ve made to reach this point in your career. Can you elaborate?

Roderick Cox: The Fourth of July became a beautiful day, and I received a lot of invitations to hang out with friends and whatnot. But I also recognized – I have a concert in Montreal next week, then fly from Montreal straight to Grant Park in Chicago, then fly straight from there to do my last concerts with the Minnesota Orchestra, then I’m with Osmo Vänskä the next week at the London Proms, then two and a half weeks in Africa, then back for one day, then off to Berlin.

I became upset, a little bit. I live vicariously through my friends’ social lives and see them on Instagram doing fun things. I try to squeeze in some of those, but I have to put in a certain amount of study time on repertoire and music before I can make that time for myself.

Those are small sacrifices. Larger sacrifices are, for example, I have a one-year-old niece that I’ve only seen twice. And a best friend since ninth grade who lives in Georgia. I feel that relationship starting to diminish. And you only see family a couple times a year.

MP: You were born in Georgia and came here from Alabama. What were the best and worst parts of being in Minnesota?

RC: The best part is I moved here during the summer. There was a great deal of excitement in the air and also nervousness around the orchestra just coming back from the lockout. [Note: The lockout ended in January 2014, but in June 2015 it was still very fresh within the orchestra and the community.]

It was an incredible opportunity not only for the orchestra, but also for me. The orchestra was going into new territory and determining what type of orchestra they wanted to be. I could think about what type of assistant conductor I wanted to be. Did I want to sit on the sidelines and do what’s asked of me, or did I want to lead and craft this position to where I could get a lot out of it, but also put a lot into it, in terms of affecting change?

I remember feeling like I was the luckiest person in the world when I came here. And I still believe that being here, with this orchestra, was the best part of my time here.

The worst part … I guess most people expect me to say the cold. But I would say to observe the city during the Philando Castile shooting and what was happening around the nation and particularly here. I may get in trouble for saying this, but one thing Minnesotans like to do is defend themselves against criticism. And I’m like, “We have to be open to the truth, and see why things are the way they are, and figure out ways to fix them.”

I was able to observe how parts of the community interact, and issues around race and how they work here. This tells me there’s still a great deal of work to be done in this particular city on many of those issues.

MP: Several words have been used to describe you. Like “elegant,” “extravagant,” “moving” and especially “trailblazing.” How would you describe yourself?

RC: I guess I am quite physical on the podium. I try to completely fill myself before going onstage, being this open vessel and filling myself with music. I think I look fairly weird on the podium. I hate to watch myself. I watch to analyze and figure out ways to get better. But it doesn’t really matter how I look. It’s about the results and how the orchestra is playing.

MP: How would you describe yourself as a person?

MP: As one of so few black conductors, you’re a role model to many people. After you led a concert in December 2016 at Shiloh Temple in north Minneapolis, critic Graydon Royce called you a “symbol of unity.”

RC: It’s good to hear, but I don’t really focus on that. As I move through my day, I’m thinking, “How do I develop a pretty good interpretation of Rachmaninoff’s Symphony #2 that I have to do next week?” I think that’s what my focus largely should be on. With that, I can hopefully change lives or influence people in positive ways. 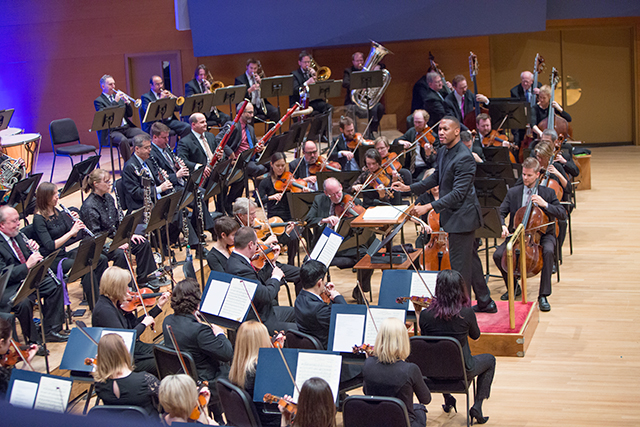 Photo by Matt Blewett
Roderick Cox conducting and the Minnesota Orchestra performing “Peter and the Wolf” in 2016.

Some young black conductors from around the country are going to fly in to see me conduct. There are people now who will travel to see me. That’s a very nice thing. But for me, it goes out of my mind in a matter of seconds. I don’t really think I’m very good. I have to get much better. There’s so much more to go in terms of reaching one’s highest potential. I think it’s within me to be the best conductor I can be, and that goes back to those sacrifices we alluded to earlier.

MP: Is there something you learned here that will stay with you forever?

RC: Tons of things. How to conduct better would be one prime example. Working with this orchestra, on this level, is experience you can’t put into words. When I was rehearsing for my first subscription concert, I felt exhausted afterwards. That told me that I need to dig deeper and go deeper if I want to continue to work with orchestras at this level. And build some sort of mental stamina.

This orchestra can be very tough, and they are tough. Most really good orchestras are. But they’ve been by and large supportive, and many [members] have become friends of mine. Osmo Vänskä, who is very tough and tough on me, is someone I’ve learned a great deal from. I don’t think I’ll ever find myself in a complacent place, because of working with him. There will always be something more to give and do. I guess what I received from him was a bit of tough love. But I’m grateful for that, and for him believing in me.

MP: Ten years from now, where are you?

RC: It’s so hard as a conductor to think ten years ahead. It’s so unpredictable. Even five years ago, my life was drastically different than now.

I guess I’ll try to answer this. I’ll say in ten years I’d love to have my own orchestra – a very good orchestra, and be well cemented in the profession and comfortable in it, living in a place that I adore. I would love to be enjoying the process more, and to feel like my head is a little bit more above water, and stepping into some of my best music-making as a deeper musician and a better conductor.

On Friday, July 27, Roderick Cox will conduct two “Symphony in 60” concerts at Orchestra Hall, his final concerts as the Minnesota Orchestra’s associate conductor. Concerts are at 6 and 8:15 p.m., and they really will last about an hour, with no intermission. FMI and tickets ($20-40).