If you want to see the Minnesota Orchestra in August, you’ll have to go to London or South Africa. Same for the Minnesota Chorale, which will send 50 singers to South Africa to perform with the orchestra and a local choir.

And if you want to see the VocalEssence Ensemble Singers in late August and early September, start making your Mexico City travel plans.

VocalEssence has long had a connection to Mexico’s choral community through its annual ¡Cantaré! program, which brings composers from Mexico to Minnesota classrooms. And VocalEssence conductor and founder Philip Brunelle has received Mexico’s prestigious Ohtli Recognition Award.

The 32-voice Ensemble Singers will join the Orquesta Sinfónica de Mineria (OSM) for three concerts in Mexico City. For its 40th season, the OSM will perform all of Beethoven’s symphonies including the Ninth and its famous final choral movement. VocalEssence will sing the “Ode to Joy” and a Brahms motet. For the Brahms, they’ll be joined by an equal number of professional Mexican singers.

In addition to the OSM performances, VocalEssence will present a solo concert of music by U.S. and ¡Cantaré! composers. There will also be an opportunity for the ensemble to meet with university choruses, singing together and performing for each other.

Brunelle sees the Brahms in particular as “a wonderful way our organization can fulfill its mission of bringing cultures together.”

The Mexico City engagement is a feather-in-the-cap addition to VocalEssence’s landmark 50th anniversary season, which begins Aug. 31 with a “Wizard of Oz” community sing at Lake Harriet Bandshell. Associate conductor G. Phillip Shoultz III will lead the crowd in singing familiar and favorite songs. Then, when the sun sets, “The Wizard of Oz” will screen and everyone can sing along to that. Because who doesn’t know “Somewhere Over the Rainbow” and “Ding Dong the Witch Is Dead?”

BodyCartography Project to spend a month at WAM

Starting tomorrow (Wednesday, July 11), BodyCartography Project – the Minneapolis- and Oslo-based collaboration of Olive Bieringa and Otto Ramstadt – will present three pieces over four weeks at the Weisman. Each is an opportunity to meet this experimental dance company and learn more about yourself. All are free, but most ask you to register.

These are not the usual sit-in-your-chair-and-watch performances.

“felt room” (July 11, 13-15) takes place in the dark. It’s an escape from a world of constant illumination, and an invitation to experience dance without seeing it. Each performance lasts 3 hours; come and go as you choose. Wednesday, Friday, and Saturday 6-9 p.m., Sunday 2-5 p.m. Register here. 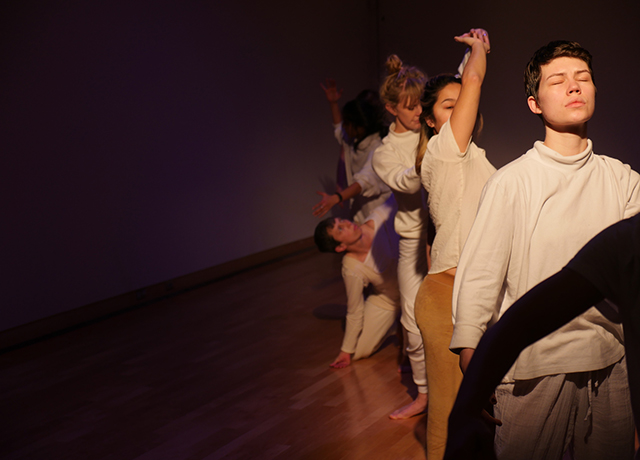 Courtesy of the Weisman Art Museum
Each performance of “felt room” lasts 3 hours; come and go as you choose.

“action movie” (July 18 and 25, Aug. 1 and 8) is a one-on-one performance practice. It’s just you and a dancer. Bieringa told the Minnesota Daily, “It’s called ‘action movie,’ so it’s like an action movie. It might be a quiet action movie.” Each will take place in the museum and maybe around campus. There’s no audience per se, but if you happen to be in the museum while one is taking place, you might see part of it. You’ll need to reserve your personal time slot. Obviously, these are limited – just four nights, four each night. So, you know, 16. Each performance is 20 minutes. 5-7 p.m. all nights. Register here.

The third piece, “Lineage,” will take place on the same nights as “action movie.” Ramstadt will combine dance with storytelling and video in his personal history of dance. Just show up; no registration needed.

There are two related events.  Thursday, July 12, at 7 p.m., Bieringa and Ramstad will give an artist talk about BodyCartography’s 20-year anniversary and their current project with WAM. In an informal conversation on Aug. 8 at 8:15 p.m., they’ll discuss research they’re doing at the U and their partnership with WAM.

FMI and registration for all.

Tonight (Tuesday, July 10) at the Amsterdam: The Theater of Public Policy: “An Evangelical, a Muslim and an Atheist Walk into an Improv Show …” Based in Minneapolis since 2012, T2P2 is expanding their footprint. In 2015, the improv comedy troupe that tackles politics – typically unfunny, especially these days – spent a week performing in Washington, D.C. Earlier this year, they did a three-month tour to 10 colleges across the U.S. And now they’re launching a summer season in St. Paul. Turns out their unique and finely honed brand – improv plus civil discourse with movers and shakers on serious topics – plays well all over. Find them Tuesdays at the Amsterdam through the end of July. Coming up: “The Great Minimum Wage Debate” on July 17; “The Funnest Man in Baseball” (Mike Veeck of the St. Paul Saints) on July 24; “From Frost King to St. Paul Mayor” (Melvin Carter) on July 31. Doors at 6 p.m., show at 7:30. FMI and tickets for all ($12 advance, $15 door).

Tonight in the U’s Ferguson Hall: Nautilus Music-Theater: Rough Cuts. New works in the making by Bucket Brigade’s Vanessa Gamble and Jeremiah Gamble, plus three new songs by George Maurer. In excerpts from their new musical “Life Goes On” (previously titled “Life After”), the Gambles continue to explore community, legacy, and family lineage. Pianist/composer Maurer returns to Tennessee Williams in three new songs based on texts by Williams and Lydia Davis, with Maurer at the piano. 7:30 p.m. in room 225. $5 or pay-as-able. Free cookies and milk. Call 651-298-9913 for reservations or email staff@nautilusmusictheater.org. 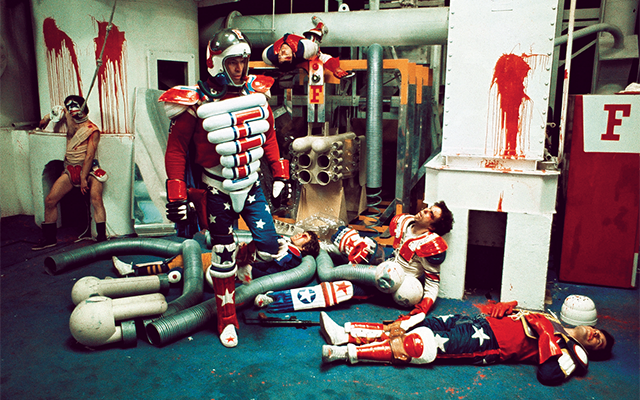 Tomorrow (Wednesday, July 11) at the Walker: Summer Heat ’68: “Mr. Freedom.” Everyone’s looking back at 1968 – because it was 50 years ago, because it was such a pivotal time, because so much of what happened then resonates strongly today. The Walker launches its Summer Heat ’68 film series with William Klein’s “Mr. Freedom,” a comic-strip-style film aimed at American imperialism and self-righteousness. 7 p.m. in the Cinema. FMI and tickets ($10/8). Also Friday, July 13.

Sunday at Barbette: Bastille Day Block Party. Always a good time, with cake. On the street: an artist market, the Picnic Operetta, Circus Juventas, the Brass Messengers, a fire circus and more. On the stage: headliner Jeremy Messersmith, the local pop/rock star who was tapped to play the Minnesota Orchestra’s Symphony Ball in May. Others include Douala Soul Collective, Black Widows, and JØUR, whose new single, “American Nightmare,” has been winning praise; she also performs July 19th at the Lake Harriet Bandshell. Bastille Day is 3-10 p.m., rain or shine, at Irving and Lagoon in Minneapolis. FMI. Free.

If you missed Dee Dee Bridgewater at Jazz Fest in June – or if you saw her and were totally blown away, as people usually are, because she’s G-R-E-A-T – you’ll be glad to know she’ll pass this way again in November with her Memphis Soulphony, this time at the Dakota. Bridgewater well deserves her NEA Jazz Master title. Two nights, four sets, Nov. 19-20. FMI and tickets ($40-50).

VocalEssence to perform in Mexico City; BodyCartography Project at WAM