The first thing you notice about Dark & Stormy Productions’ “‘Night, Mother” is the set. You have time to look it over, because there’s no curtain in the room at the Grain Belt Warehouse the company calls home. So you see the comfy sofa with the crocheted afghan tossed over the back. And the rocking chair, strangely suspended by cables from the ceiling. Along the back wall, the kitchen – sink, counter, stove – is held by cables and seems to float above the ground.

It’s mysterious and unsettling, but it complements the play. The sofa belongs to Thelma (Sally Wingert), a widow, solid and set in her ways. The chair belonged to her late husband, no longer a physical presence but still felt. Jessie (Sara Marsh), Thelma’s daughter, a divorced woman and mother to an adult son, is floating somewhere between the worlds of the living and the dead. She has decided that by the end of the day, she’s going to kill herself.

Jessie tells Thelma early in the play, in so many words: “I’m going to kill myself, Mama … I am.” Thelma’s immediate response is, “Very funny … You are not! Don’t even say such a thing.” But Jessie has said it, and she means it. The next 80 minutes or so will tick away in real time. There’s a working clock on the kitchen wall. It’s impossible not to glance at it now and then, to keep from wondering “How long?”

Marsha Norman’s dark (and occasionally stormy) drama won the 1983 Pulitzer Prize. Thirty-five years later, updated slightly by Norman with a couple of topical references, it’s still deeply disturbing. And very hard to watch, especially if you have any experience of suicide in your own life. Because of the size of the room and the way the play is staged, you’re often close to the actors. You can see the smallest expressions on their faces, the disbelief and grief in Wingert’s eyes. It feels wrenchingly personal.

Jessie wants to die because death is “dark and quiet … So quiet I don’t know it’s quiet. So nobody can get me.” Because “death is everybody and everything I ever knew, gone.” She can’t find a reason to live. She loved her father, but he died. Her son is a criminal. Her ex-husband left her. She doesn’t have a job or friends. She has epilepsy. At the moment, it’s under control with medication, and Jessie actually feels better than she has in ages. Good enough to finally do what she has wanted to do for years.

It all makes perfect sense. Which makes the play even more unsettling.

Much of “’Night, Mother” is Thelma trying to talk Jessie out of her plan, or guilt her out. She pleads, cajoles, shames, threatens, praises and commands. She uses every trick she has available – quite a few, it turns out. She’s accustomed to getting her way. “Let’s get a dog!” she suggests. “Let’s get a taxi and go to the A&P! … Let’s rearrange the furniture!”

At one point, a flood of words pours out of her: “Why do you read the newspaper? Why don’t you wear that sweater I made for you? Do you remember how I used to look or am I just any old woman now? When you have a fit do you see stars or what? How did you fall off the horse, really? Why did Cecil leave you? Where did you put my old glasses?”

As the minute hand moves around the clock, mother and daughter ask questions they’ve never asked and share secrets they’ve never told. They learn about each other and themselves. Does that change anything? Not for them, but maybe for us in the audience. What about our own lives and relationships?

“’Night, Mother” calls for actors who can handle the emotional demands and the brutal honesty, who can convince us they’ve known each other forever and are standing together on an awful precipice. Wingert, of course, is Wingert, seen on Twin Cities stages everywhere because she’s so damn good. Marsh steps into Jessie’s shoes with fierce conviction. Both give tremendous and fearless performances.

For “’Night, Mother,” D&S has partnered with the National Alliance on Mental Illness. NAMI staff will be present for post-show conversations on Aug. 24, Aug. 30 and Sept. 5. Information about suicide awareness and prevention is tucked into every program. Decisively directed by Hayley Finn, the play continues through Sept. 8. FMI and tickets ($15-39).

Starts today (Thursday, Aug. 23): 2018 Minnesota State Fair. We were on the grounds Tuesday night for a “fine arts sneak peek” – an open-to-the-public opportunity to tour the Fine Arts exhibition and see this year’s winning art. As always, thousands of pieces were submitted by artists from all over the state, but only 300 were chosen to show at the Fair. The grounds were a hum of activity. The Great Big Wheel – one of the tallest traveling giant Ferris wheels in North America – is back for its second year, and on Tuesday it was trying out its zillions of colored lights and swirling patterns. Two food stands just outside the Fine Arts building, Kiwanis Malts and Foot Long Hot Dogs, were serving customers. We are so ready for the fair to begin. Here’s a list of discount days. And be sure to get the Minnesota State Fair app, with the very handy Food Finder. Through Labor Day, Sept. 3. FMI. 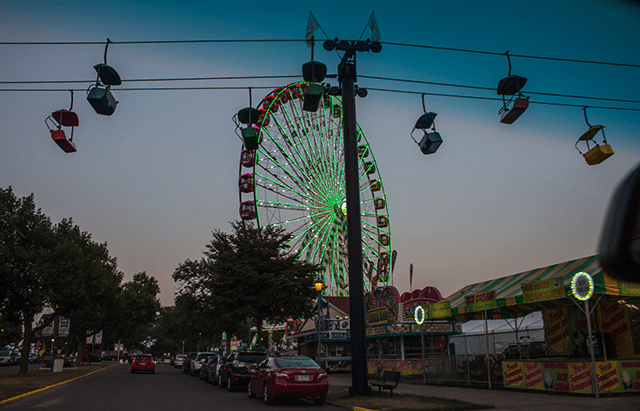 MinnPost photo by John Whiting
The Great Big Wheel – one of the tallest traveling giant Ferris wheels in North America – is back for its second year at the Minnesota State Fair.

Tonight in Elliot Park: Elliot Park Art Walk. The first in a series of monthly events. Start with a happy hour pint at Finnegans Brew, shop stalls selling handmade goods by local artists, and take a narrated walking tour with The Theater of Public Policy, with stops at local businesses along the way. Drop in at Gamut Gallery to see the current exhibition, visit Punchy Magnolia (adoptable puppies!), Good Arts Collective and Rose Salon, then return to Finnegans for live music and more market. 4-9 p.m. Tour from 5-8 p.m. Free. FMI. Next month’s date: Sept. 20.

Tonight at Third Place Gallery: “The Registry.” Filmmaker Steve Ozone will be on hand to discuss his film (with Bill Kubota) about the Military Intelligence Service (MIS), which trained thousands of Japanese-American men and women as translators, interpreters and interrogators during World War II at locations including Fort Snelling and Savage, Minnesota. The group has been credited with shortening the Pacific War by two years. Third Place is the “urban living room” of Wing Young Huie, the 2018 McKnight Distinguished Artist who was featured here on Tuesday. 3730 Chicago Ave. S. in Minneapolis. 7-9 p.m. FMI. 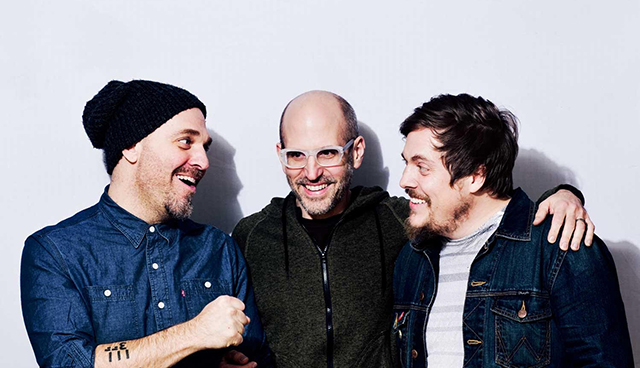 Courtesy of Happy Apple
Dave King, Erik Fratzke and Michael Lewis will reunite as Happy Apple this Friday at the Dakota.

Friday at the Dakota: Happy Apple. Formed in 1996 by drummer Dave King and saxophonist Michael Lewis, joined soon after by bassist Erik Fratzke, Happy Apple is a kind of proto-band, a sound and energy and attitude that sparked and influenced a lot of bands and music that came after. They haven’t made a new album since 2007’s “Back on Top,” and all three have gone on to their own numerous projects, but whenever they get together to play, it’s like old times, except now they also know everything they have learned in between. Especially for jazz fans, this is a no-brainer. 7 and 9:30 p.m. FMI and tickets ($20-25).