Tickets are on sale now to the Rose Ensemble’s last season. If you’ve never seen them, if you haven’t seen them in a while or (obviously) if you’re a fan, now would be a good time to act. The closer we get to the final concert in June 2019, the scarcer the tickets will become.

Founded in 1996 by Artistic Director Jordan Sramek, the Rose Ensemble is a remarkable group with a history of musical excellence and deep scholarship. Sramek traveled the world in search of music from centuries past, which the Rose presented as modern-day premieres, performing in the original languages. With a repertoire spanning a thousand years, they toured widely, made several recordings (you might want to get those, too, while you can) and won prestigious awards.

A stew of financial challenges including falling ticket sales, not enough donations and a surprise audit by the Minnesota Department of Employment and Economic Development was too much to overcome. Announcing earlier this year that 2018-19 would be the end, Sramek expressed the hope that the Rose could go out in a “modest yet meaningful” way. That would depend on donors and institutional funders. Enough stepped up that the Rose has what Sramek calls “a chance for a proper goodbye.”

It’s all that and more.

Nov. 16-18: “Empire, Religion, War, Peace: Music from Europe’s 30-Year Conflict, 1618-1648.” A new program of music and narrative about the war that claimed more than 8 million lives. A collaboration with Dark Horse Consort, an instrumental ensemble specializing in 17th-century brass music.

Dec. 20-23: “A Tudor Christmas: Reverence and Revelry at the English and Scottish Renaissance Courts.” Music associated with Henry VIII, Elizabeth I and Mary Queen of Scots.

April 4-14, 2019: “Voices of Angels: Benedictine Gregorian Chant and Choral Music from Baroque Italy.” Works for voices and instruments. One night only in the Twin Cities: April 13 at the Basilica of St. Mary.

June 15: Finale Concert. The Rose gave their first concert at the Basilica of St. Mary in 1996. They’ll perform their last there as well. Musicians from throughout the group’s 23-year history will be on hand for a night of medieval and Renaissance choral music and Sergey Khvoshchinskiy’s “Bogoroditse Devo, raduysia,” written especially for them.

Meanwhile, the Rose is touring with “Land of Three Faiths: Voices of Ancient Mediterranean Jews, Christians, and Muslims.” On Thursday, Sept. 20, you can hear them for free at Church of the Ascension in Minneapolis; on Feb. 13, 2019, they’ll perform at Carleton College in Northfield. FMI.

You might want to jump on these tickets, too, even though June 11, 2019, seems like forever away. When the Aizuri Quartet made its debut at Sundin Hall early this summer, several members of the sold-out crowd were seated on the stage.

Aizuri, a new young ensemble based in New York City, had just won the M-Prize, the world’s largest chamber music award. Along with $100,000 cash and other major perks, the prize includes a recording contract. Aizuri’s first album, “Blueprinting,” comes out Sept. 28, a month from today, on New Amsterdam Records. (Here’s the trailer.) Chamber Music Society of Minnesota is calling its next concert an “after party.” 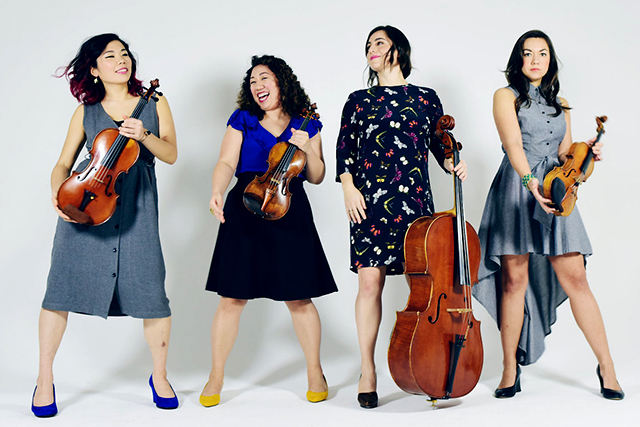 Photo by Shervin Lainez
Aizuri Quartet, a new young ensemble based in New York City, returns to the Twin Cities for the Chamber Music Society of Minnesota 2019 season.

Violinist and Aizuri member Ariana Kim is a St. Paul native and daughter of CMSM’s artistic director, Young-Nam Kim. So we can hope for more-or-less regular appearances by this splendid quartet. We were there for their first performance in St. Paul and it was dazzling, a program that ranged from works by Hildegard von Bingen and Beethoven to the newest of new music (Paul Wiancko, Lembit Beecher), played with élan and authority.

Aizuri’s performance concludes a 2018-19 season of many temptations: composer and jazz pianist John Harrison on Oct. 4 (Young-Nam Kim has strong connections with jazz; prior seasons have featured pianist Kenny Werner and saxophonist Joe Lovano); “Music of Desolation” on March 10, 2019 (works by Erwin Schulhoff, Alban Berg and Respighi); and the return of cellist Fred Sherry (April 14), who also has jazz in his blood; he has enjoyed a close collaboration with Chick Corea. CMSM’s annual family concert is set for Dec. 9.

Tonight (Tuesday, Aug. 28) at Washington County Library: Club Book: Karin Slaughter. Nearly 20 thrillers written, 35 million sold. A No. 1 internationally best-selling author, Slaughter is best known for her Grant County and Atlanta series, which sometimes intersect, but she has also written several stand-alones including her latest, “Pieces of Her,” which came out in June. 6:30 p.m. Free.

Tonight (Tuesday, Aug. 28) at Vieux Carré: Nichols/Bates/Bates. That’s Bryan Nichols on piano, Chris Bates on bass and JT Bates on drums. Who knows what they’ll play? Maybe standards, certainly improvisations, likely tunes they’ve played together in the past and some they’re trying for the first time. When three really good jazz musicians who have known each other for ages get together, surprises are part of the package. 8-11 p.m. FMI. $7 at the door.

Wednesday at the Indeed Brewery Taproom: Indeed We Can: Trylon edition. A night of movie trivia with the staff of the Trylon-formerly-microcinema. The event description somewhat cryptically says “we’ll be there to talk movies, the future of Trylon, etc. …” All the profit on every beer you buy goes to the Trylon. 3-11 p.m. Trivia starts at 7. Free. Indeed We Can is the brewery’s give-back-to-the-community initiative, benefiting local nonprofits chosen by the staff. 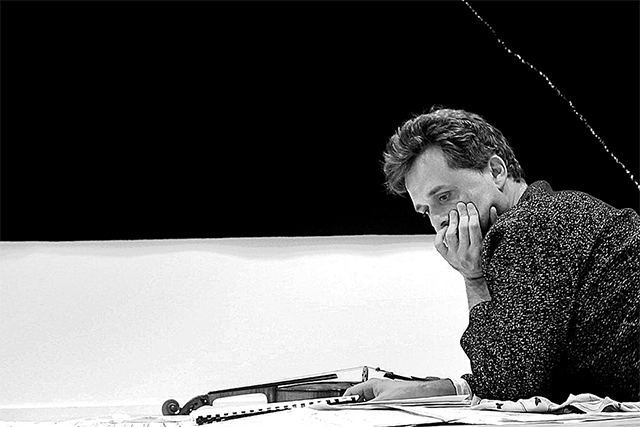 Thursday at Mia: Tapestry Violin: Musical dialogues between Jan Groth and Peter Sheppard Skaerved. Mia recently acquired a tapestry by the important Norwegian artist Jan Groth. It looks like a chalk mark hastily drawn on a chalkboard, and it’s insanely compelling. In the Fountain Court, award-winning British violinist Peter Sheppard Skaerved will perform a selection of classical Baroque and Norwegian traditional music, plus some of his own compositions developed in response to Groth’s work. Skaerved plays a 1698 Stradivari. 6:30 p.m. Free.

Thursday at the Amsterdam: James S. Murray presents “Awakened.” Horror fans, this is for you. The star of truTV’s hugely popular “Impractical Jokers” (where he’s known as Murr) joined with sci-fi and horror writer Darren Wearmouth on a novel being compared to “The Strain” (by Guillermo del Toro and Chuck Hogan). except it’s set in the New York subway. The building of a new line awakens something living beneath the city and all heck breaks loose. We’re just wildly speculating here, but this seems to have all the ingredients of a successful evening. And then you get to read the book, included with your ticket. Presented by Subtext Books. 5 p.m. FMI and tickets ($29.60). A book signing follows.