Fans of the St. Paul Chamber Orchestra are already familiar with Sang Yoon Kim. He performed with the orchestra as a guest musician for seven weeks in 2017-18. The South Korea native had his first taste of Minnesota even earlier, in 2013, as Young Artist in Residence with Classical MPR.

The first Korean clarinetist accepted to the Conservatoire de Paris, Kim studied there and in Los Angeles at the Colburn Conservatory. He has worked with leading international artists, including SPCO artistic partner Martin Fröst and pianist Jean-Yves Thibaudet. He has played as guest principal clarinet of the Cleveland Orchestra and the London Symphony. And he has already won several international competitions.

Kim was unanimously chosen as principal clarinet by the SPCO’s all-musicians audition committee. He’ll be featured as soloist on Weber’s Rondo for Clarinet and Strings (Sept. 20-30) and in many chamber works throughout the coming season.

You know a musical is a very big deal when the Minneapolis Fed joins the welcome committee. “Hamilton,” based on the life of Alexander Hamilton, opens at the Orpheum next Wednesday, Aug. 29. What’s the link between the bank and the Broadway hit? Alexander Hamilton created the nation’s first central bank.

The Fed is taking this opportunity to “educate students and the broader public about Hamilton’s contributions to our country’s financial system.” A student who wins a social media contest will also win two tickets to the musical on Oct. 4 and a paid internship at the bank. A “Hamilton”-themed bank tour will be open to the public. Starting Aug. 28, banners about Hamilton’s legacy will decorate light poles at the Fed’s main entrance off Hennepin Ave.

There’s even a website, up and running, with fun facts about Hamilton the man, a quiz, contest details, in-depth articles and information about the free tour and the Hamilton exhibition. Go here, click on Public Tours, then click on public tour request form. (Dear Minneapolis Fed: Consider making your hotlinks stand out. Use a different color?)

Just by visiting the website, we learned something we did not know. Alexander Hamilton’s mug on the $10 bill is the only portrait on U.S. currency that faces left.

Music fans love MnSpin. Since the launch last December, more than 20,000 songs have been streamed and/or downloaded. Musicians are saying that MnSpin is good for them, too, bringing more attention to their music.

Plus the artists whose albums are chosen for MnSpin get paid. The Friends of the Hennepin Country Library provides $200 for each.

Nearly 300 albums were submitted for the latest round. A panel of music experts and library staff narrowed this down to the 70 latest additions, available now. The panel included Dan Gaarder (Jayhawks, Trailer Trash, Roe Family Singers), soprano Maria Jette, J.D. Steele and MaLLy.

Maybe you’re wondering (as we did in December, when MnSpin launched) why the library is in the music business. The answer: It always has been. You can find sheet music, vinyl, cassettes and CDs in the brick-and-mortar buildings, so why not digital music online?

Tonight (Wednesday, Aug. 22) at Crooners: Ben Sidran’s 75th Birthday Bash. Catch the second night of Sidran’s two-night engagement at the jazz club in Fridley. The enormously accomplished pianist, producer, singer, composer, author and Peabody-winning radio host has made more than 30 solo albums and produced for artists including Van Morrison and Steve Miller. (Sidran co-wrote “Space Cowboy.”) He’s here with his son Leo on drums, plus the Hornheads’ Kenni Holmen on sax and Billy Peterson on bass. Last night’s show was in the main room. Tonight’s will be in the intimate Dunsmore. 7 p.m. FMI and tickets ($30).

Tonight at the Walker: MNTV 2018: On the Big Screen. You can watch these Minnesota-made shorts at home on your teevee or maybe your iPhone in September. Or you can see them on the big screen in the Walker Cinema with many of the filmmakers, then meet and greet them after at a reception. It’s free, why not go? Two one-hour programs include works by E.G. Bailey, Peter Nelson, Jason Schumacher, Emily Fritze and Peixuan Ouyang. 7 p.m. FMI.

Now at the Minnesota Jewish Theatre Company: “What I Thought I Knew.” Kim Kivens, who played Felicity in MJTC’s “Natasha and the Coat” earlier this year, returns in a very different role. Make that nearly 40 roles, all within 90 minutes. Alice Eve Cohen’s one-woman show, based on her own true story, follows a 44-year-old woman through her complicated, high-risk pregnancy. Cohen will attend Thursday’s performance and stay after for a talkback with Kivens and director Jennie Ward, moderated by MJTC’s artistic director, Barbara Brooks. Closes Aug. 30 so there’s not much time left to see this one. FMI and tickets ($23-38). 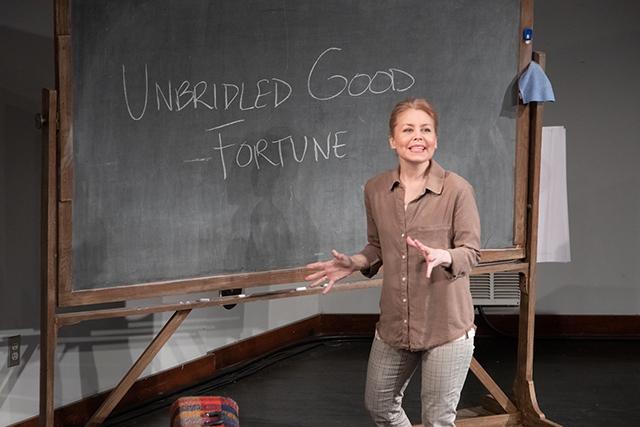 Thursday at HUGE Improv Theater: Bollyprov. This Bollywood-inspired improv group will bring the flavor of Bollywood movies to improv. And the unnecessary drama and cheesy romance. Bollyprov is part of the second annual MinneUtsav, a South Asian performing arts festival presented by Bollywood Dance Scene. Ages 12 and up. 9 p.m. FMI and tickets ($10).

Opens Friday at Hennepin History Museum: “Owning Up: Racism and Housing in Minneapolis.” It’s chilling to read words like these: “If a neighborhood is to retain stability it is necessary that properties shall continue to be occupied by the same social and racial classes.” And this excerpt from the Realtor Code of Ethics 1924-1950: “A Realtor should never be instrumental in introducing into a neighborhood … members of any race or nationality, or any individuals whose presence will clearly be detrimental to property values in that neighborhood.” Curated by Denise Pike and Kacie Lucchini Butcher, grad students in the U of M’s Heritage Study and Public History program, this exhibition explores the history of racial housing discrimination in Minneapolis through the stories of three black families. It’s good background into why we are where we are today. If you want to see it during opening week, you’ll need a ticket ($3-5), due to high demand.

“Pipedreams” fans, this is for you. Michael Barone has hosted the popular public radio program – the only weekly radio program about the pipe organ – for 35 years. It’s all rather momentous and the Twin Cities Chapter of the American Guild of Organists plans to do something about it. On Sunday, Sept. 23, TCAGO and MPR will present a free public organ recital, performed by TCAGO members and hosted by Barone, at Wooddale Church in Eden Prairie. The concert will be followed by a public reception. 3-5 p.m. No tickets or registration required. Just show up.