If you see “I Come From Arizona,” the powerful new play at Children’s Theatre Company, try not to read any news about detained or deported immigrants earlier that day. On Sunday morning, we stumbled on an article in the New York Times about Adrián Luna, a 45-year-old Mexican man who was deported in 2017 after 27 years in Utah. He was determined to return to his home, family and church in the United States. His body was found in the California desert in July.

Their mother, Dolores, cleans skyscrapers in the Loop and babysits other people’s children. At the start of the play, their father, Reymundo, leaves on a perilous journey to Mexico. His father is dying, and he wants to see him one last time. He’ll have to cross the desert on his way back – the same desert Reymundo and a pregnant Dolores crossed 14 years ago, fleeing violence and poverty. Will he make it back safely? Meanwhile, will ICE come knocking on the Castillo family’s door? And what if visiting your dying parent meant risking your life and maybe never seeing your family again?

If the many stories of deported immigrants, or immigrants fearing deportation, have blurred into a big gray cloud in your head, “I Come From Arizona” will bring the whole sorry, tragic mess into razor-sharp focus. Based on interviews with members of Chicago’s Latinx community, the play is a glimpse into the lives of people who worry every day about the knock on the door, or the meeting in the ICE office that ends in a wrenching separation.

Gabi learns the truth when Ms. Chan, the Global Perspectives teacher at her new school, gives the class their first assignment: Find out where your family is from, then report back. (This was the only moment in the play that gave us pause. Would a teacher today ask that question of a Latinx student? But the play hinges on it, so roll with it.)

It’s only the first day, and Gabi has already faced anti-immigrant bias on her long bus ride and heard a classmate speak out in favor of building a wall. She already wonders if she belongs at Northside or if she should have gone to a neighborhood school.

Other students have iPads; she has a flip-phone. They’re free to meet after school to work on projects; some get picked up and driven around by caretakers. Gabi has to ride three buses to the South Side, fetch Jesús from the neighborhood school, help him with homework, cook dinner for him, play with him, get him ready for bed and tell him a story, all before starting her own demanding homework, because Dolores has to work more and harder when Reymundo is away.

Gabi’s parents have never told her about their past. They sidestep the topic when she asks. And if anyone asks her, she’s supposed to say “I come from Arizona” and leave it at that. But that’s not good enough to avoid getting an F for Ms. Chan’s assignment. This leads to a crisis, a confrontation between Gabi and her mother, and a late-night monologue that’s the main reason to bring Kleenex to this play. That, and the final scene. And a few in between.

Presented in a mixture of Spanish and English, “I Come From Arizona” turns a mirror on our time. The staging in the Cargill black box works beautifully. Yu Shibagaki’s sets are backed by a colorful mural of diverse faces. The stage becomes an apartment, a city bus, a busy school hallway whirling with first-day uncertainty, a classroom, an upscale condo, a South Side park and a glimpse into a desert. Director Lisa Portes keeps it thoroughly believable, up to and including the dream sequences. Who wouldn’t have nightmares under such circumstances?

The cast more than carries the weight, with young Ayssette Muñoz as Gabi, a girl on the brink of adulthood; even younger Luca La Hoz Calassara as smart, sensitive Jesús; Nora Montañez as careworn Dolores; Ricardo Vásquez as the loving Reymundo; Antonio de La Vega as Gabi’s new friend, Ricardo; and Madison Neal as her classmate Fiona, a girl of great privilege whose eyes are opened.

CTC initially recommended this play “for receptive 8-year-olds and up.” They’re now thinking middle school and up might be the best age. It’s a long play – two hours, including a 15-minute intermission – and the topic is heavy. We saw the 5 p.m. show on Sunday. There were many young children in the crowd, but none around us acted bored or impatient. And when 2-year-olds are brought before judges in federal immigration court, 8 seems old enough to see this. And 80 is not too old.

“I Come From Arizona” continues through Nov. 25. FMI and tickets (prices vary). CTC has prepared an Audience Resource Guide with tips on talking with kids about the play.

Joshua Bell, Sheku Kanneh-Mason to perform at the Ordway

Sheku Kanneh-Mason, in case you haven’t heard because you don’t care about Prince Harry and Meghan Markle (who are having a baby, by the way), is the young cello prodigy who performed at their wedding. He’s also the first black artist to win the BBC Young Musician of the Year award.

The Schubert Club announced today that both are on its International Artist Series line-up for 2019. Bell will perform on Oct. 27, Kanneh-Mason on Dec. 5 and 6.

The best way to guarantee tickets is to buy a subscription package to the current season. If you’ve already bought single tickets, you can upgrade. Call 651-292-3268.

Tonight at the Parkway: “The Gates: An Evening of Stories with Adam Gopnik.” The best-selling author and New Yorker staff writer is the sole star of a show that sold out a week at New York’s Public Theater. Developed with the Moth, it draws from Gopnik’s own life and family, from his ancestors to his two children. It’s a man at a mic, precisely what we want from Gopnik in person. 6:30 p.m. doors, 7:30 show. FMI and tickets ($20 advance/$24 door).

Wednesday at the Cowles: Arena Dances Panel Discussion: Gun Violence in America. For its fall season, Mathew Janczewski’s company will perform a new work, “Hold my hand,” about gun violence in America. Arena has partnered with activist organizations whose work focuses on gun safety and support for victims of gun violence. The evening will include an excerpt from the dance and a conversation with Ayolanda Evans of Protect Minnesota, Steven Venable of Moms Demand Action, and Rachael Joseph of Survivors Lead. In Studio 2B. 6-8 p.m. FMI. Free.

Thursday at the Hennepin History Museum: Opening reception for “History in Focus: Photographs in the Life of Hennepin County.” Nicollet Island bellhops and Walter Mondale with AIM members. A 20-pound northern pike and Dan Patch, the world-famous horse, beside his own railroad car. The Hennepin History Museum has more than 14,000 photos; friends and neighbors Peg Meier and Dan Dennehy have chosen 40 to tell the story of our region. Meier is a former Star Tribune reporter and author (“Bring Warm Clothes”); Dennehy is senior photographer at Mia, just up the street from HHM. 6-8 p.m. Free with museum admission ($5/3). Please RSVP online or call 612-879-1329, ext. 2#. 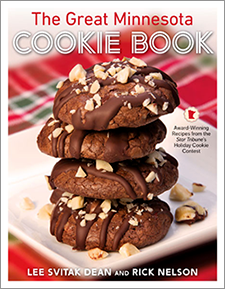 Thursday at Plymouth Library: “The Great Minnesota Cookie Book” discussion and signing. Each year, the Star Tribune holds a cookie contest, then prints the winning recipes. And each year, we fully intend to keep them and file them away neatly somewhere. But we don’t and never will. So hurray for this book, which collects 15 years of the contest’s best recipes, plus baking lore and photos. Say “Perfect Christmas Gift.” With authors Lee Svitak Dean and Rick Nelson. 6:30 p.m. Free.

Starts Friday at MacPhail’s Antonello Hall: Cantus: “Alone Together.” A concert built around a theme meant to stir hearts and minds is a Cantus signature. “Alone Together” explores meaningful connection in a world where we’re growing farther apart each day. It includes three works written for the superb men’s vocal ensemble: Steven Sametz’s setting of Walt Whitman’s poem “We Two,” David Lang’s yearning “Manifesto” and Libby Larson’s brand-new “You,” a musical essay on the human condition of being alone together. Plus the Beatles’ “She’s Leaving Home” and works by other composers. 7:30 p.m. FMI and tickets (prices vary by location). Five more performances take place in Wayzata, Edina, St. Paul, Stillwater, and back in Minneapolis.