Former MPR News radio host Tom Weber had always wanted to write a book. He yearned to know what that process was like, so he would have more insight into authors he interviewed. He got the chance when a friend put him in touch with Reedy Press in St. Louis, publisher of the “100 Things to Do in … Before You Die” series. In 2015, Reedy published Weber’s “100 Things to Do in the Twin Cities Before You Die.”

Then Weber got the chance to write a revised second edition sooner than usually happens. In late 2017, all the remaining copies of his book were destroyed in a warehouse fire. The second edition came out last month. On Saturday, Oct. 13, Weber will be at the Mill City Farmers Market, signing copies and chatting.

Weber’s book is one you want if you live here, if out-of-towners visit you, if you own an Airbnb or run a hotel. It’s thoughtfully written, fun to read and full of ideas for things to see and do, even in the winter.

We spoke with Weber on Wednesday. This interview has been edited and condensed.

MinnPost: Were 100 things too many or too few?

Tom Weber: It ended up being just right. It was a lot to get to 100. Those last few weeks of putting the book together were stressful. But the first half of the book came easily. It was fun to relive my early years here and pick out the things I really liked. From there, I talked to friends, did research online, and researched other communities I’m not as familiar with to cast a wider net. I enjoyed that.

MP: What are your personal top three?

TW: The top is the Luminary Loppett. It was one of the first things I did when I moved to Minnesota. It felt really Minnesotan. I probably have a romantic connection. It’s beautiful. You have the luminaries out there with the candles. You don’t have to ski. You can just be there for the hot cocoa. 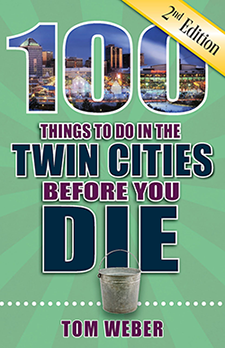 Another thing I love is Minnehaha Falls. When you’re at the bottom of the falls, looking up, you can also turn around and there’s a walking path that goes away from the falls and follows the creek to the Mississippi River. It’s one of the most Zen places I’ve ever gone on a hike. And you’re only two or three miles from one of the busiest airports in the country. It’s one of those places you can go and forget you’re in a big city. I love to find those places.

The third thing is the Mill City Museum. It was so bizarre to me to think that someone would erect a museum dedicated to telling the story of flour and milling. And its main attraction is an elevator. Then you go in there and it’s so beautifully done. It was my biggest surprise. I fell in love with it.

MP: What did you leave out that you were sad to leave out?

TW: I left out a lot of food and restaurant stuff. I know I’m not Rick Nelson or Dara [Moskowitz] Grumdahl, or the Splendid Table, or the people here in the Twin Cities who have won their own Beard awards for writing about restaurants and food. That was so over my head. And frankly, I thought there was so much already out there about the food scene. And it’s so fast-changing. I put in things like Al’s Breakfast and the patio at [W.A.] Frost, more for the location than the food.

I hope people think it’s fun. I’m not here to say it’s the be-all, end-all. I probably didn’t pick the 100 you would have picked.

MP: Do you think you’ll write another book?

TW: I am pondering that. I am talking with some people about possibilities. I’m not totally sure yet on where that will go. But I do love writing, so if that’s an avenue and someone is interested in me writing something, I really want to have that meeting.

MP: What kind of book would you like to write next?

TW: I would be more interested in a nonfiction history kind of thing. Something within Minnesota history that I could really sink my teeth into.

Tom Weber will be at the Mill City Farmers Market on Saturday from 9 a.m. to 1 p.m. Look for a booth or a table with a stack of grass-green books.

Friday at the Germanic-American Institute: Janet Horvath: “It’s Not Too Late to Stop the Hate.” Horvath was associate principal cello of the Minnesota Orchestra from 1980 to 2012. Her parents were musicians and Holocaust survivors. After the war, her father joined an orchestra of survivors and traveled through Bavaria, playing hundreds of concerts in Displaced Persons camps. Two were led by Leonard Bernstein. In May of this year, Horvath played Max Bruch’s “Kol Nidre” in Landsberg, Bavaria, on the same spot her father and Bernstein performed 70 years earlier. She calls it “an out-of-body experience.” Horvath has created a multimedia theater piece including narration, projected photos and cello interludes, all music her father played. Telling her parents’ story of survival, weaving in current social justice issues, she’ll follow the performance with “courageous conversation.” 301 Summit Ave., St. Paul. Ages 10 and up. 6 p.m. FMI and tickets ($20).

Friday at the Anoka County Library – Northtown: Club Book: Curt Brown. A Minnesota Journalist of the Year (2013) and longtime chronicler of Minnesota history, Brown is out with his latest. “Minnesota 1918” captures an annus horribilus for our state: a year with a world war abroad, a flu outbreak at home and the most destructive natural disaster on state record. Brown’s other books include the New York Times best-seller “In the Footsteps of Little Crow.” 711 County Hwy. 10 Frontage Road, Blaine. 7 p.m. Free.

Saturday at the Minnesota State Fairgrounds: 18th Annual Twin Cities Book Festival. Who’ll be there? Oh, just dozens of authors, hundreds of exhibitors, about 6,000 book lovers and gazillions of books. The largest literary event in the Upper Midwest, Rain Taxi’s book-a-thon is filled with activities, curiosities and people to see and hear. Presenting authors include Steve Almond (“Bad Stories: What the Hell Just Happened to Our Country”) and Dessa (seen last weekend on stage at Orchestra Hall, she has a new memoir, “My Own Devices: True Stories from the Road on Music, Science, and Senseless Love”). There will be a poetry tribute to Bob Dylan, celebrating the release of “Visiting Bob: Poems Inspired by the Life and Work of Bob Dylan.” And a lengthy lineup of children’s, middle-grade and YA authors. 10 a.m.-5 p.m. Free. FMI. If you want to start your weekend with a party, there’s a Friday-night Book Bash in downtown St. Paul. FMI and tickets ($25 advance/$30 door).

Sunday at Crooners: The First-Ever Twin Cities Fall Jazz Festival. With more than eight hours of jazz on two stages, this is where jazz fans will want to be. Out-of-towners include NOLA vocalist Nayo Jones, a hit at summer’s Jazz Fest; the great drummer Butch Miles, formerly with the Count Basie Orchestra; and pianist Tanner Taylor, who used to live here but moved to Iowa. Connie Evingson, Debbie Duncan, Dave Karr, Andrew Walesch, Lucia Newell, Southside Aces and ACME Jazz Company will round out the day. 1 p.m.-8:30. FMI and tickets ($35 general admission, $90 VIP with buffet). Crooners is spacious and comfortable, with lots of free parking.

Former Vice President Walter Mondale was an eyewitness to the tumult of 1968 and has thoughtful, considered things to say about our current social and political upheaval. On Tuesday, Oct. 23, at the Minnesota History Center, he’ll be in conversation with Professor Larry Jacobs of the Humphrey School of Public Affairs for “An Evening with Walter Mondale – Reflections on 1968 and 2018.” 7 p.m. FMI and tickets ($30).