Artscape
Vanessa Rose will be the new president and CEO of the American Composers Forum (ACF), board chair Ann LeBaron announced Tuesday.

Over the past decade, Rose has led the Knights orchestra collective, International Contemporary Ensemble, Arco Collaborative and the Lark play development center, all based in New York, through significant transitions. As a consultant, she has helped to expand EarShot, the national orchestra program for emerging composers, and guided groups such as the Talea Ensemble and Orchestra of St. Luke’s through organizational and staff changes. She has been an ACF board member since 2018. She’s also a violinist.

“The American Composers Forum’s commitment to connecting composers and communities and to nurturing the rich ecosystem that supports composers links to my own experience and passions,” Rose said in a statement. LeBaron praised Rose’s “visionary and collaborative spirit, along with her substantial experience in advising, developing, and strengthening dynamic new music ensembles.”

Rose will succeed John Nuechterlein, who announced his retirement in April after 15 years. ACF will host an open-house retirement party for Nuechterlein on Dec. 6. Rose will move to the Twin Cities from New York. She’ll begin her new position on Jan. 1, 2019.

Founded in 1973 by Libby Larsen and Stephen Paulus, formerly the Minnesota Composers Forum, ACF supports the work of living composers and develops new markets for their music. Its 2,000 members include composers and performers, presenters and organizations, individuals and institutions who work in virtually every musical genre. ACF programming reaches composers and communities in all 50 states. Its Innova Recordings is the premier label for American new music.

“Sonic Youth” film out, “Bathtubs Over Broadway” film in at Sound Unseen

Looking on the bright side, there are a lot of Broadway fans in the Twin Cities.

Sound Unseen, our annual festival of films on music, has pulled “Sonic Youth: 30 Years of Daydream Nation” from the lineup. Filmmaker Lance Bangs was scheduled to appear. In its place: “Bathtubs Over Broadway.”

Dava Whisenant’s award-winning film tracks “Late Show With David Letterman” comedy writer Steve Young as he pursues his obsession: industrial musical stage productions and recordings from the 1950s-70s. These were million-dollar productions for companies and businesses that the public never saw, staged in the service of insurance policies, burgers and dog chow.

Sound Unseen director Jim Brunzell said in a statement, “As much as we looked forward to screening ‘Sonic Youth: 30 Years of Daydream Nation’ and welcoming Mr. Bangs … we couldn’t agree on terms … I happen to think audiences will fall in love with ‘Bathtubs Over Broadway.’” Brunzell saw it and liked it at the Tribeca Film Festival. Like most films in Sound Unseen, this will be a Minnesota premiere.

Sound Unseen will take place Nov. 14-18, mostly at the Trylon. FMI and tickets.

VocalEssence: Singing with the stars

VocalEssence – the choral music organization founded by Philip Brunelle, now celebrating its 50th anniversary year – is making friends in high places. First they sang with the Rolling Stones. Then they opened for Idina Menzel on Nicollet Mall during Super Bowl Live – in December, brrrr.

On Friday, they’ll sing four songs with Josh Groban at the Xcel as part of his Bridges tour, where Menzel will be a special guest. The songs will include Groban’s signature, “Raise Me Up.”

Associate Conductor G. Phillip Shoultz III will lead singers from the VocalEssence Ensemble and VE’s new youth choir, Singers of This Age (SOTA). Still in its inaugural year, the diverse choir includes students from all over the Twin Cities.

Another Thursday pile-up. It is not our fault that so many things happen on Thursdays.

Tonight (Thursday, Nov. 1) at TPT: “The People’s Protectors” screening and reception. Twin Cities PBS will start Native American Heritage Month with the premiere of a TPT-produced documentary from Leya Hale, award-winning producer and member of the Dakota nation. Hale’s film features four Native American veterans who served in the Vietnam War. The screening will be followed by a Q&A with Hale. Food and beverages will be served. 172 East 4th St., St. Paul. 5:30-9 p.m. Free, but please register. This event is part of “Twin Cities PBS Honors Native Cultures,” during which TPT will air original productions that share stories of Native Americans in Minnesota and air the PBS series “Native America,” which began Oct. 23. Learn more and watch full episodes here.

Tonight at the Capri: First Thursday Films @ the Capri: “Don’t Get Trouble in Your Mind: The Carolina Chocolate Drops’ Story.” Filmmaker John Whitehead will attend this special screening of a film that debuted at MSPIFF during the 2018 snowstorm. If you missed it then, try again. Featuring the Grammy-winning bluegrass trio, it tells the story of how African and European Americans collaborated to create this earliest form of American popular music. Co-presented with the Film Society of Minneapolis St. Paul and the Minnesota Historical Society. 7 p.m. FMI, trailer and tickets ($5). A discussion with Whitehead will follow, moderated by the Film Society’s Craig Lawrence Rice. 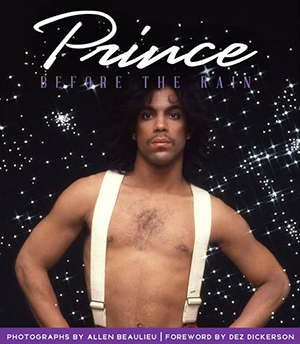 Tonight at the Electric Fetus: “Prince: Before the Rain” book launch. Photographer Allen Beaulieu worked with Prince from the late 1970s into the early 1980s. He was always at Prince’s side, camera in hand, shooting album covers, promo photos and live performances on tour. This book is a big, full-color photo album of images from the “Dirty Mind,” “Controversy” and “1999” era. We’d call it a page-turner except you’ll want to linger on every spread. Jim Walsh wrote the lengthy, luscious introduction, Dez Dickerson the forward. The book also includes reminiscences from Bobby Z, André Cymone and more. 7-9 p.m.: Book talk with Beaulieu, Dickerson and Walsh. 8-9 p.m.: Signing with music by Curtiss A. Free and open to the public.

Friday and Saturday at Orchestra Hall: Vänskä Conducts Mahler’s Seventh. The magnificent Mahler, performed without intermission before the Orchestra records it for the Swedish label BIS. Friday’s concert will be broadcast live by Classical MPR (KSJN 99.5 FM in the Twin Cities). After both performances, Vänskä will sign copies of the orchestra’s previous Mahler CDs in the lobby. Having recorded all the Sibelius symphonies (and won a Grammy), all the Beethoven symphonies and all the Beethoven piano concertos, the orchestra is halfway through the Mahlers. If you think that’s business as usual for American orchestras (or any orchestras) these days, read Terry Blain’s article for the Star Tribune. 8 p.m. both nights. FMI and tickets ($12-97).

Sunday at MacPhail: The Bakken Trio: Three Bs. The esteemed chamber music ensemble opens its 2018-19 season, “By the Numbers,” with Bach’s Sonata for Violin and Piano in A major, Beethoven’s String Quartet No. 13 and Brahms’ Sonata for Cello and Piano in E minor. The two sonatas, which transformed the role of the keyboard in chamber music, will be followed by the string quartet, complete with its original final movement, the Grand Fugue. To co-artistic director Stephanie Arado, the three composers are a sacred trinity that has guided her musical journey. With Arado and Natsuki Kumagai on violin, Pitnarry Shin on cello, Korey Konkol on viola and Timothy Lovelace on piano. In MacPhail’s lovely Antonello Hall. 4 p.m. FMI and tickets ($25-15).